Raffensperger’s Office has said the signature match audit will not change the outcome of the November election.
Meanwhile Senators Perdue & Loeffler continue to slam the SOS for a lack of transparency with regard to the most recently registered voters in Georgia. 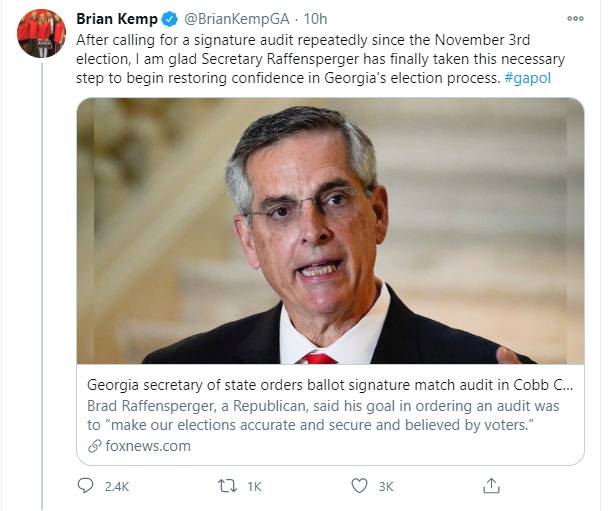 Georgia Secretary of State Brad Raffensperger announced Monday that a signature match audit in Cobb County and an additional statewide signature match audit will be conducted. The announcement came after the electoral voters from Georgia cast their ballots in favor of Joe Biden and his office said the audit would not impact the the outcome of the election.

The Secretary of State’s Office will partner with the Georgia Bureau of Investigation to conduct the Cobb County audit and with an accredited university for the statewide audit.

“Election integrity has been a top priority since day one of my administration,” said Secretary Raffensperger. “Though the outcome of the race in Georgia will not change, conducting this audit follows in the footsteps of the audit-triggered hand recount we conducted in November to provide further confidence in the accuracy, security, and reliability of the vote in Georgia. I look forward to working with the Georgia Bureau of Investigation, Cobb County, and any other future partners to secure the vote in the Peach State.”

Secretary Raffensperger first announced that following specific allegations that election workers in Cobb County had not adequately conducted signature matching on absentee ballot applications ahead of the June primary elections, the Office of the Secretary of State would partner with the Georgia Bureau of Investigation to conduct an audit of the signature match in Cobb County. The audit will consist of reviewing a statistically significant subset of the signed absentee ballot envelopes and comparing those signatures to the ones on file in Georgia’s voter registration system.

“Conducting this audit does not in any way suggest that Cobb County was not properly following election procedures or properly conducting signature matching,” said Chris Harvey, Director of Elections for the Secretary of State’s office, who was formerly the Chief Investigator for the office. “We chose Cobb County for this audit because they are well known to have one the best election offices in the state, and starting in Cobb will help as we embark on a statewide signature audit. Just like Cobb County volunteered to be a pilot county for our new voting system, we thank everyone at the Cobb County elections office for their cooperation with this process especially while voting is underway for the runoff.”

The audit of Cobb County’s signature match system is expected to take two weeks. However, it will not change the outcome of the November election.

Raffensperger also announced a planned statewide signature match audit. The Office of the Secretary of State will partner with an accredited university to conduct a third-party signature match statewide audit study.

“It’s been one week since the voter registration deadline passed and the Secretary of State has failed to compile and release a final list of newly registered voters. This is totally unacceptable – the deadline for new voter registration was December 7, 2020. In-person early voting starts today, and the public remains without a full accounting of who is registered and who may attempt to cast a ballot in the runoff. This lack of transparency needs to be rectified immediately, or the integrity of our elections will remain threatened. Georgians demand transparency, accountability, and accuracy in our elections process – and the Secretary of State is failing to provide it in a timely manner.”

They released 7 questions for the SOS office, to include: