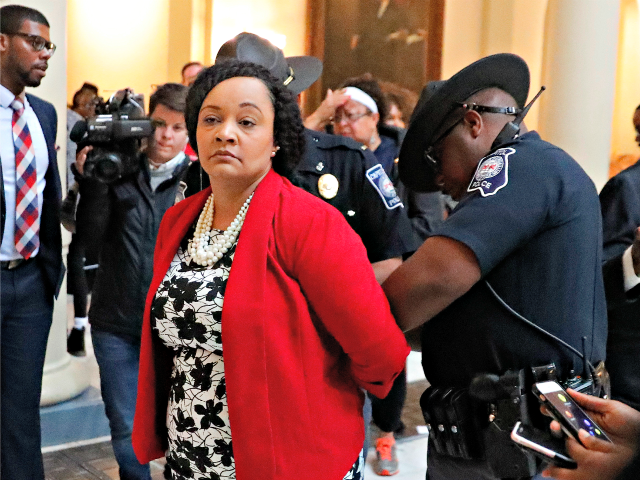 State Senator Nikema Williams was arrested at the Georgia Capitol on Tuesday during a protest over demands for every vote to be counted following the November 6th election.

Law enforcement officials reportedly broke up the protest after warning protestors not to break the rules by “yelling and chanting while lawmakers are in session.” Lawmakers are currently in a special session at the Capitol to deal with the aftermath of Hurricane Michael.

Williams was among those arrested, an unusual sight as lawmakers are generally not permitted to be arrested during a legislative session unless charged with treason, a felony, or breaching the peace.

“I was not yelling. I was not chanting,” Williams said in the video. “I stood peacefully next to my constituents because they wanted their voices to be heard, and now I’m being arrested.”

State Sen. @NikemaForSenate is among those being detained during a protest at the Capitol rotunda pic.twitter.com/febG6sCrGS

The Abrams for Governor campaign said Tuesday that “State Senator Williams stood peacefully next to her consistuents, supporting the demands that their voices must be heard.” Campaign Manager Lauren Groh-Wargo released the following statement:
“Shamefully, State Senator Nikema Williams was arrested while doing the job she swore an oath to do, standing in solidarity with her constituents to support the core values of our democracy and  demand that every Georgia vote be counted. The charges against Senator Williams should be dropped immediately.”
The Democratic Party of Georgia similarly sent out a statement Tuesday saying:
“Today, First Vice Chair of the Democratic Party of Georgia Nikema Williams, a State Senator representing the 39th District, was arrested at the Georgia State Capitol while standing up for her constituents’ right to peaceful protest and advocating to count every Georgian’s vote. In short, she was arrested for doing her job where she works. We stand with her and with all Georgians whose Constitutional rights are at risk. The Democratic Party of Georgia will continue to fight every day to make sure every Georgian’s vote is counted and every Georgian’s voice is heard.”
Williams and other protesters were taken to the Fulton County jail. As of now, it is not clear whether those arrested will face charges, or what those charges will be.
Related Topics
Jessica Szilagyi