Abrams Campaign Says They ‘Discovered Ballots Not Reported by Kemp’ 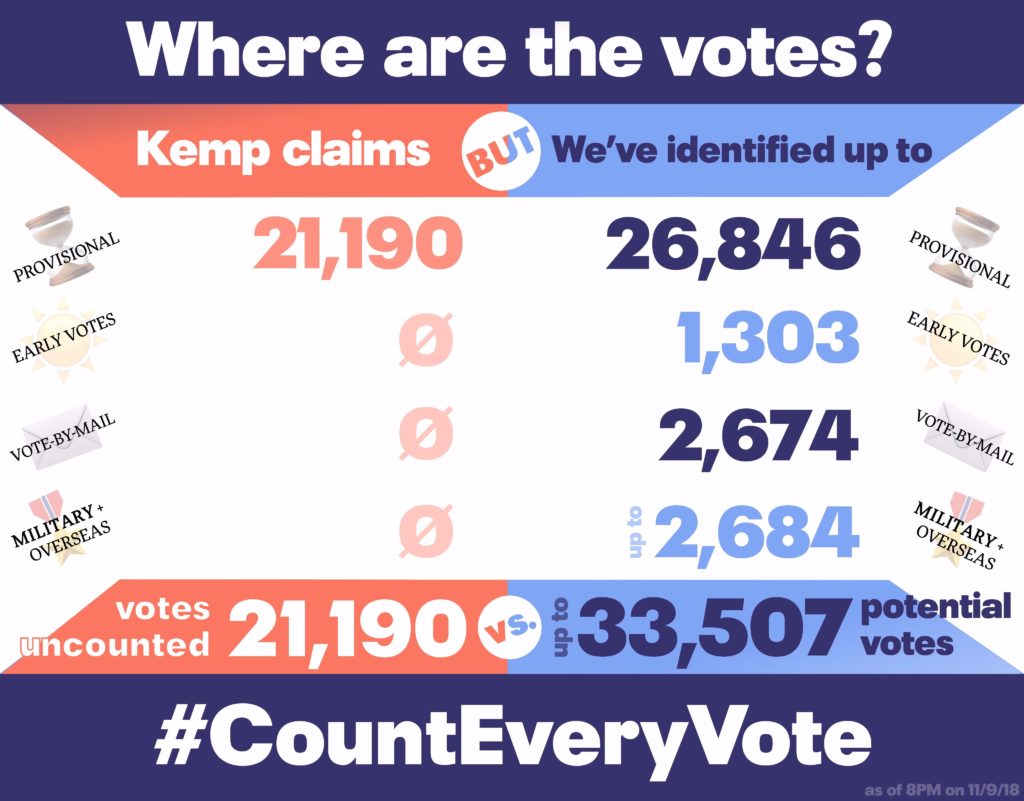 The Stacey Abrams for Governor campaign said late Friday night that they have ‘discovered ballots’ not previously reported by Kemp.

The campaign issued a press release after 10:00 p.m. Friday saying that “the campaign has discovered a minimum of 30,823 ballots that have not yet been counted.”

Kemp’s office claims there are 21,190 outstanding provisional ballots, which he says is fewer than the number needed to trigger either a recount or a runoff election. But this is not accurate.

According to our findings, there are up to:

That’s at minimum 30,823 ballots, and it doesn’t include the number of ballots submitted by members of the military serving overseas, which could amount to as many as 2,684 ballots.

As of now, this campaign would go to a runoff with 26,074 votes, and a recount would be forced with only 23,713. Given that an overwhelming number of the provisional ballots that were cast are in counties that are significantly more likely to be Democratic-leaning, there is an excellent chance that the counting of these votes would result in triggering a recount or a runoff election.

The Abrams campaign cites Kemp’s numbers but a new interim Secretary of State was appointed by Govenor Deal this week as Brian Kemp stepped down from his role as Secretary of State on Thursday at noon to begin the process of transitioning to the Governor’s office. The Secretary of State’s office has maintained that not enough votes are outstanding to tip the scales in Abrams’ favor.

Across the state, counties like Richmond and Fulton are reporting a toss out of upwards of 40% of the provisional ballots cast for reasons like casting a vote in the wrong county and not being registered to vote.

The Abrams campaign has held firm that every vote must be counted before results of the election can be certified. A federal judge issued a temporary restraining order Friday halting the certification of some county election results and allocated additional time for absentee ballot counting. Similarly, counties around the state – like Chatham and Gwinnett – local board of elections offices extended their regular business hours Friday to allow voters more time to return to handle provisional ballots.

The Abrams campaign staff has been working in 159 counties around the state and launched a ‘ballot chase’ intiative to call voters who cast provisional ballots on election day.

Election results must be certified by Tuesday, November 13th as Monday is a holiday.