A bipartisan group of Georgia Sheriffs and law enforcement officials have endorsed Senator David Perdue in his re-election campaign ahead of the November race in which he faces Libertarian Shane Hazel and Democrat Jon Ossoff. 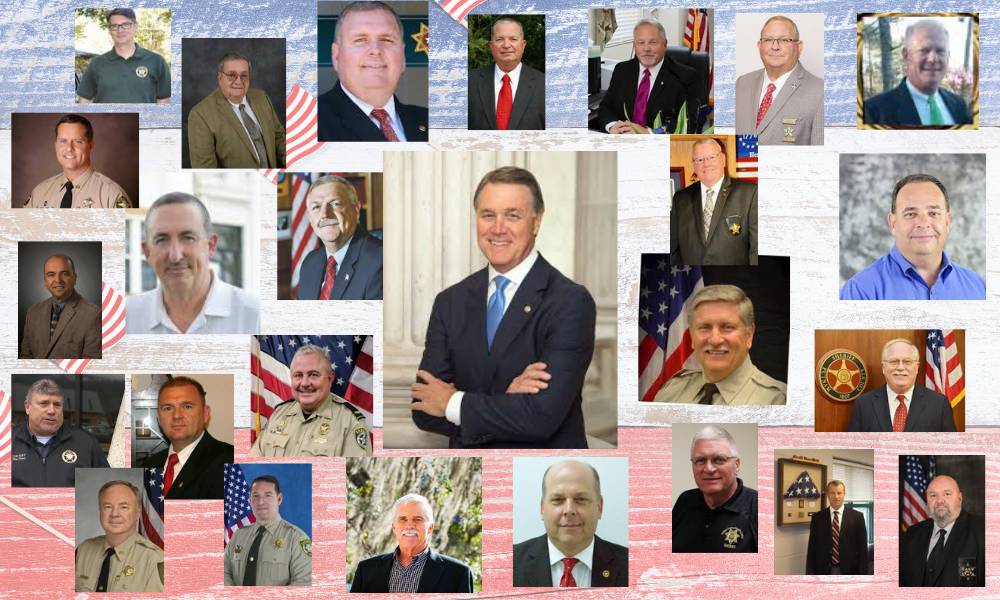 A bipartisan group of Georgia Sheriffs and law enforcement officials have endorsed Senator David Perdue in his re-election campaign ahead of the November race in which he faces Libertarian Shane Hazel and Democrat Jon Ossoff.

“Georgia’s public safety officers represent the very best of our state and country,” Senator Perdue said in a news release. “Every day, our men and women in law enforcement are on the front lines working to preserve peace and prevent crime, and it’s my highest honor to join them in fighting to protect all Georgians. Now more than ever, Georgia’s public safety officers need our strong support as they work to maintain the trust of the communities they serve.”

Attorney General Chris Carr: “As the state’s Chief Law Enforcement, I am thankful to have a partner like Senator David Perdue in our efforts to keep all Georgians safe and secure. He has stood with Attorneys General from across the country to end human trafficking, protect seniors from elder abuse, fight the opioid pandemic, and stop violent crime and anarchy that has emerged with the ‘defund the police’ movement. This radical movement has emboldened criminals across the nation, and those who do not condemn it are complicit in helping turn America into a lawless society. Senator Perdue is a proven defender of our Constitution, as well as the most vulnerable in Georgia. He’s fighting for our rights in Washington, so let’s fight to re-elect him in Georgia.”

Insurance Commissioner and former Doraville Chief of Police John King: “As a former Police Chief and proud member of the National Guard, I know the incredible sacrifices that our men and women in uniform make on a daily basis. Senator Perdue has consistently stood for public safety and demonstrated the strong leadership needed to heal Georgia communities. Unlike his opponent Jon Ossoff, Senator Perdue has opposed calls by radical liberals to ‘defund’ our police departments. We need more leaders like Senator Perdue, and I look forward to casting my vote for him and other candidates who ‘Back the Blue.’”

Sheriff Janis Mangum, Jackson County: “For over 30 years, I have served on the frontlines to protect our communities and families from those wishing to inflict harm. Now, more than ever, we need our representatives in Washington to have our backs and help us maintain public safety. Through fairness, integrity and transparency – not rioting and looting – we will rebuild trust in our communities. David Perdue’s support of law enforcement is unmatched, and it’s absolutely critical that he serve another six years as Georgia’s senator.”

Melba Scarbrough, wife of Sheriff Gene Scarbrough, Tift County: “It’s a difficult time for public safety families across our state and nation. My husband, Gene, has had a long career in law enforcement, and our entire family has always been part of that service. Today, the men and women who dedicate their lives to protecting others are under attack. Radical Democrats who call to ‘defund the police’ either don’t realize or don’t care how that devastates police families. I have seen Gene’s heart and that of his deputies firsthand. They commit their lives to our community, just like David Perdue does for all Georgians. Georgia is safer and stronger because of Senator Perdue’s leadership in supporting our heroes on the frontlines. Gene and I are more motivated than ever to keep Georgia and Tift County safe by re-electing David Perdue this November.”

Sheriff Steve “Stevie” Thomas, Franklin County: “On May 21, 2014, my life forever changed; not just as a Sheriff, but as a husband, father and grandfather. My son, Deputy Steven “Cruz” Thomas, was killed in a vehicle crash while attempting to catch a fleeing suspect. Cruz served with the Jackson County Sheriff’s Office and had protected his community faithfully for seven years. At 26 years old, his life was taken too soon, but his legacy lives through all of us who serve our communities with a commitment of service to others above self. I’m proud that Senator Perdue has and continues to have the back of our men and women in law enforcement. David has my and my family’s support. I know he will make us and all of Georgia proud.”

Sheriff Cullen Talton, Houston County: “I have been honored to protect my community since 1973, and I’m humbled to be Georgia’s longest serving Sheriff today. It’s a privilege to serve Houston County; it’s long been my home and has always been the same to David Perdue. Senator Perdue has never forgotten where he came from, and his middle Georgia values make him the right man to serve our state. He’s brought a fresh perspective to Washington. We need that now more than ever. He will defend what’s right and fight for those who do the same. It’s a blessing to know that Georgia’s public safety leaders can call on Senator Perdue.”

Wayne Dasher, Georgia Department of Corrections Board Member & Friends of Law Enforcement Founder: “For over 30 years, our annual Law Enforcement Appreciation Cookout has brought the community together to honor first responders. Now, more than ever, we need to celebrate the men and women who dedicate their lives to public safety. Senator Perdue is a Friend of Law Enforcement. I’m proud to serve as David’s local volunteer county chairman and will do all that I can to get him re-elected between now and November 3. I hope you’ll join me in supporting him and our public safety heroes across Georgia.”

Deputy Katlyn Danielle Reid, Lanier County Sheriff’s Office: “I had been a police officer in a neighboring community, but I was shot by a fleeing suspect on my first day with the Lanier County Sheriff’s Department. Thankfully my law enforcement brothers and sisters were with me, and together, we stopped the suspect from hurting others. I’m so grateful God spared my life and for the opportunity to serve my community alongside Sheriff Norton and countless professionals. It is my hope that Georgia families can rest assured knowing their community is being fought and protected by capable and caring public servants. Senator David Perdue has our backs, and I’m proud to join countless other public safety leaders in supporting Senator Perdue.”

Sheriff Randy Shirley, Stephens County: “As a leader with the Georgia Sheriffs’ Youth Homes, we seek to preserve a bright future for our youth through a wholesome and safe environment. There is more to public safety than just law enforcement. Care is essential. Sheriffs and supporters across Georgia have stepped up, since 1960, to care for our abandoned, neglected, and abused children. Senator Perdue has always been a great defender for youth. One of his first jobs was at a Head Start program to help kids learn to read, and he was recently presented with The Boys and Girls Clubs’ ‘Champion Of Youth’ Award. His steadfast leadership for our children and our state makes him the right leader here at home and in Washington, D.C.”

Michelle Dix, wife of Sheriff Darrell Dix, Spalding County: “My husband and two sons are peace officers. They truly protect with courage and serve with compassion. As an elementary school teacher for nearly 30 years, I was proud to help build a bright future for the next generation. We are saddened to see how negative rhetoric and lawlessness are jeopardizing the safety and future of our children. Senator Perdue, in contrast to this, is a champion for our communities. He has our family’s vote. We are proud that he stands with all Georgians as we build up our communities and not destroy them.”

District Attorneys Alison Sosebee (Appalachian), Natalie Paine (Augusta), Shannon Wallace (Blue Ridge), and Rosemary Greene (Cherokee):  “As Georgians we are proud to join Senator Perdue in fighting for public safety at this pivotal moment for our state and nation. Senator Perdue continues to partner with all levels of law enforcement and put politics aside to wipe out gangs, combat opioid abuse, stop domestic violence, protect our seniors from elder abuse, and support mental health programs. As a wives, mothers, daughters, and District Attorneys, we strive to improve our community for future generations. We are grateful that in times of uncertainty, we can count on Senator Perdue’s strong leadership in Washington.”