2020 CANDIDATE INSIDER: Jessica Szilagyi chats with Shane Hazel who is running for U.S. Senate in Georgia. 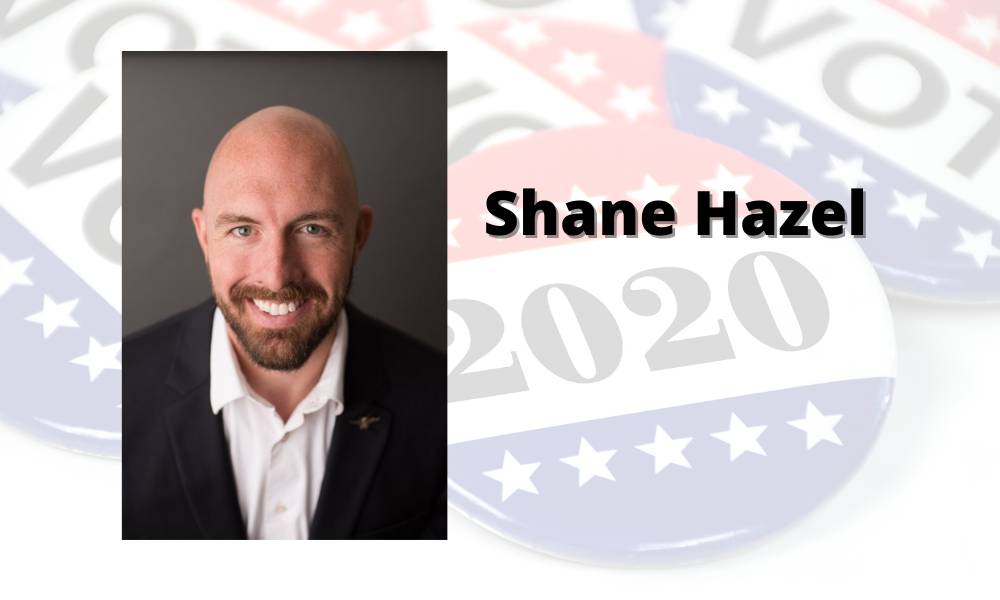 As a family man, Marine Combat Vet, host & producer of his own podcast,, and CEO of a production company, some might question why Shane Hazel wants to go to Washington, D.C. to represent 10 million Georgians in one of the most polarized places in the country.

But for the candidate himself, it’s about presenting a different choice to voters who are tired of the political system and who seek to return to constitutional principles.

Hazel was nominated by the Libertarian Party at the Party Convention in January of this year after coming in first place on a ballot with two other individuals, a race in which he did not plan to partake. But he’s no stranger to the political arena, having run as a Republican in the 7th Congressional District against Congressman Rob Woodall in 2018. Hazel’s 2018 candidacy, however, was not a welcomed one by the GOP in the 7th Congressional District since he sought to challenge an incumbent and he says the process left a bad taste in his mouth. At the time, Hazel condemned Democrats and establishment Republicans for usurping the constraints of the Constitution and arbitrarily growing their power at the expense of all Americans and their inalienable rights. While that campaign was unsuccessful, his outreach efforts and the message in favor of liberty proved to be just the opposite.

What’s important to him?

Hazel defines his ideology simply: ‘Peace, Liberty, and the Free Market.’ The self-declared ‘Anti-Federalist’ says on his campaign website that his mission is to “bring people together while preserving the freedom of every individual, regardless of skin color, age, faith, gender, love and every other nuance which makes us unique. We must come together and remove the corporate cabals front of the lives of peaceful people here in the US and around the world.”

End the wars: Hazel said ending the wars, on foreign land and here at home, is his top priority. Hazel cited the wars in Afghanistan and Iraq, the failed war on drugs, and the United States holding the highest rate of incarceration in the world as context for excessive spending, misuse of human capital resources, and immoral acts by the federal government.

Ending the Federal Reserve: Eliminating the monetary policies Hazel said are organized and made by an international banking cartel that have had ‘really terrible’ impacts on the United States.

Ending the Empire and Advocating for Criminal Justice Reform: Hazel supports ending the practice of no-knock raids, eliminating qualified immunity for all governmental and political agents (not just law enforcement), ending the militarization of police, pushing back against police unions and repealing civil asset forfeiture practices.Hazel says he would support doubled penalties for any person acting on behalf of the government when they break the law.

The role of a U.S. Senator would be unique for someone who doesn’t have allegiance to the two major political parties, Hazel professes. He said using press conferences to expose war hawks and their lobbies, as well as the tactics of special interest groups.

Hazel also says there are a number of initiatives on which he would file legislation for immediately after making it to D.C. A few of those would include:

“I’ve got a laundry list of very short bills to stop stripping away the power of government,” Hazel said.

In a better world, politicians would fear The People. “As a marine combat vet, I don’t want war. I definitely don’t want to see my countrymen have to die and suffer, to have families without moms and dads and kids. But how fed up are people going to get? We have to lead by example and breed a rollback, limit the oppression.”

That presents a dichotomy for some voters with regard to the civil unrest our country is facing, but Hazel says not for him.

“What we see rising up is not the liberty crowd. What we see rising up right now is the cult of the state and you can tell because they’ll say, “We want reforms within the police and the justice system,” but when push comes to shove, they’re not going after the state. They’re going after private property owners, private entrepreneurs, private businesses, neighborhoods. That absolutely cannot be tolerated. These are two competing gangs: communists and fascists out there who all want control, and they all power. On one side, they want to take your stuff and on the other side, they want to hurt people. And when they come together, and where they’re headed, they’re burning down America right now. It’s a push for more statist power.”

For that reason, he says he does not support the federal troops going into cities to respond and it should be local businesses owners and residents who defend their property with the assistance of police.

Along the same lines, Hazel was asked to explain the benefits of assuming the risk of personal responsibility. “It’s like any other problem. Just because you don’t have all the answers doesn’t mean you can’t come up with the answer. Government is the lazy man’s way to fix problems. They can’t run a DMV at this point and people want the same type of organizations to run everything from police to healthcare to education.”

Hazel has an uphill battle, though. His opponents in the two major political parties have funding streams from all across the country, funneling millions of dollars into the campaign coffers.

Nevertheless, Hazel is optimistic. He says the 2020 election cycle has changed the game considerably and while many of the same people that protect the political system ‘as is’ remain in power, they’re losing ground. “The establishment is taking unprecedented hits on approval, trust in government practices across the board is down. We’re seeing that system fall apart, with support for real solutions and decentralization [of government].”

MYTH: “A third party vote is a wasted vote”

Hazel rejects the idea that people will throw away their votes if they cast a ballot for him on November 3rd simply because he does not have a letter from one of the two major political parties next to his name.

“One way or another, there’s going to be another election. If somebody doesn’t get 50% + 1, If you want to make a statement, if you want to pull more towards liberty, you’re not wasting your vote. People will tell you you’re wasting your vote and at the same time say that you’re going to help ‘the other candidate’ win, but it can’t be both, right? Vote your conscience. You’re going to get a re-do, then you can vote for the lesser of two evils, but you will have voted for someone the first time who wanted more liberty.”

As a third party candidate, many traditional media outlets have refused to cover Hazel’s candidacy or even mention that his name will appear on the ballot alongside Republican David Perdue and Democrat Jon Ossoff. In these odd campaign times, Hazel has been reaching voters via social media, his podcast, and at public events organized by Libertarians. The podcast, RadicalPod, gives Hazel the opportunity to speak to people of all ideologies in a way that is unfiltered, principles, and consistent and he has continued to release new shows throughout the campaign.

You can learn more about Shane Hazel on the following platforms: