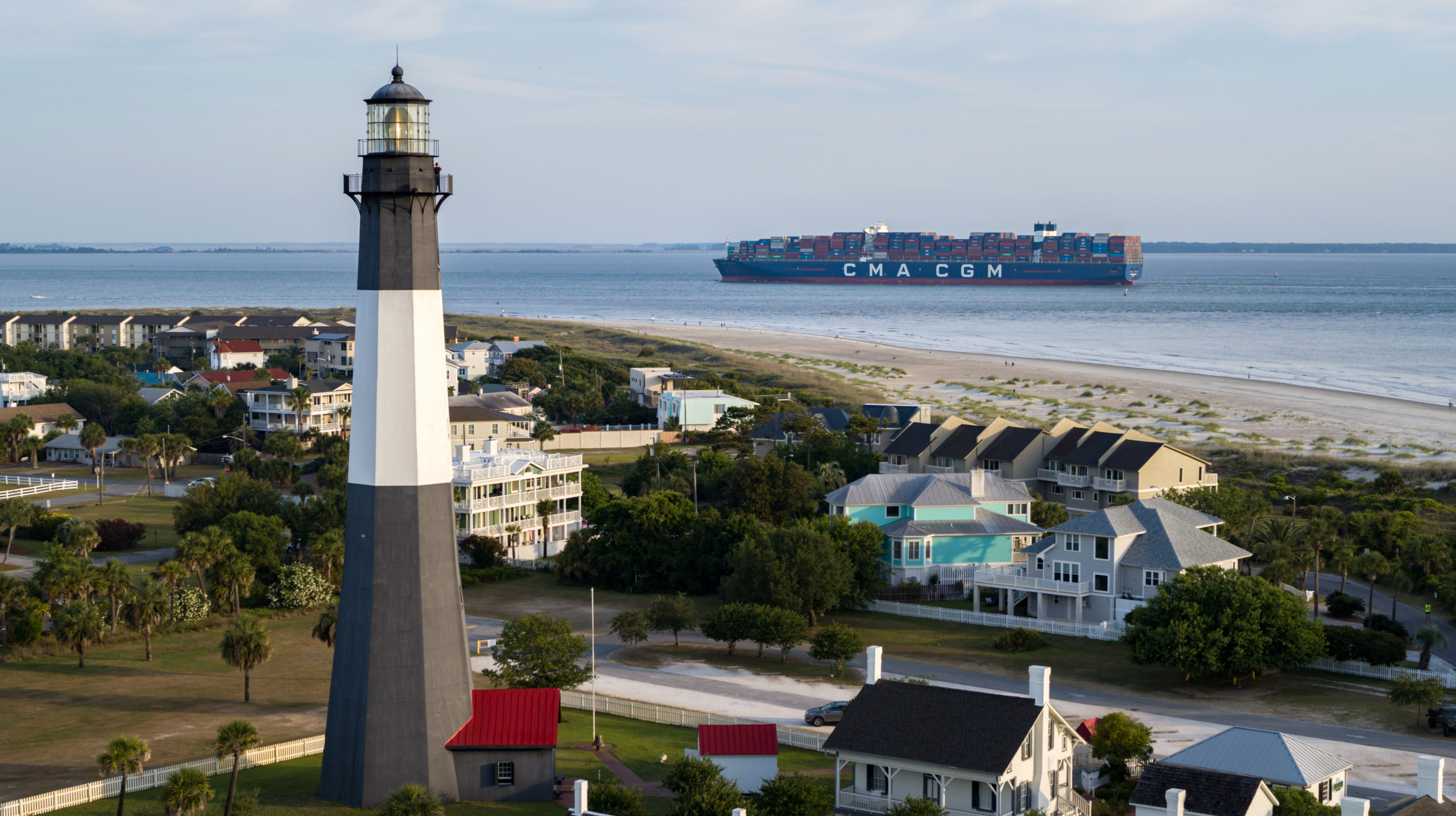 Port of Savannah served the largest vessel ever this week, the 16,000+ TEU Marco Polo. The port is expanding berth capacity to handle additional big ships.

The largest container ship to ever serve the U.S. East Coast called on the largest single container facility in North America Wednesday. As the massive 16,000-TEU vessel docked at the Port of Savannah’s Berth 9, a team of logistics professionals tackled the CMA CGM Marco Polo with seven ship-to-shore cranes and hundreds of men and women on the ground and aboard the vessel to load and unload an estimated 6,000 TEUs of cargo.

“In my seven years serving on the port authority board, it has been gratifying to see Savannah step up to the plate and increase its capacity, infrastructure and workforce to accommodate massive vessels like the Marco Polo,” said outgoing GPA Board Chairman Will McKnight, who boarded the vessel at the mouth of the Savannah River with the pilots who guided the ship along the channel. “There is a reason Garden City Terminal has become the hub for global commerce in the Southeastern U.S: 30 cranes, nearly 10,000 feet of contiguous dock space, and a 1,345-acre container yard.”

With the longest single container terminal dock in the U.S., GPA was scheduled to work five other vessels simultaneous to the CMA CGM Marco Polo on Wednesday.

“At CMA CGM, we are dedicated to providing solutions for our customers. The deployment of the CMA CGM Marco Polo is yet another indicator of our flexibility and commitment to delivering the essentials that keep America moving,” said Ed Aldridge, president of CMA CGM America and APL North America. “It is also important to mention that this milestone would not be possible without the efforts of our port partners on the East Coast. Their intelligent, timely infrastructure improvements to support larger ships make it possible for us to proactively respond to the needs of our customers.”

To expand the Port of Savannah’s ability to serve vessels in the Marco Polo’s class, GPA has started construction to straighten a bend at Berth 1 of Garden City Terminal. This will allow the Port of Savannah to simultaneously serve four 16,000-TEU vessels, as well as three additional ships. Berth 1 renovations will add an estimated 1 million TEUs per year of berth capacity by 2023.

“We appreciate the trust CMA CGM places in the Port of Savannah to effectively serve these big ships, and to expedite cargo to and from inland markets spanning from Dallas to Memphis and into the Midwest,” said GPA Executive Director Griff Lynch. “Cargo fluidity is key to providing world-class service to shipping line and cargo owner customers, which is why we are also doubling our rail capacity at Garden City Terminal.”

The CMA CGM Marco Polo, built in 2012, is 1,300 feet long – or more than four football fields – and more than 175 feet wide. The vessel is deployed on the AWE3/Columbus service, which connects the U.S. East Coast and Asia via the Suez Canal, with cross-Pacific links to the U.S. West Coast. The AWE3/Columbus service includes 19 vessels ranging in size from 10,000 TEUs to 16,000 TEUs.

In other improvements to better accommodate big ships, the GPA Board approved in November the purchase of eight new ship-to-shore cranes. The new machines will replace six older models, bringing Savannah’s fleet to 38. The eight taller cranes are timed to arrive in 2023, coinciding with the completion of the Berth 1 renovations.