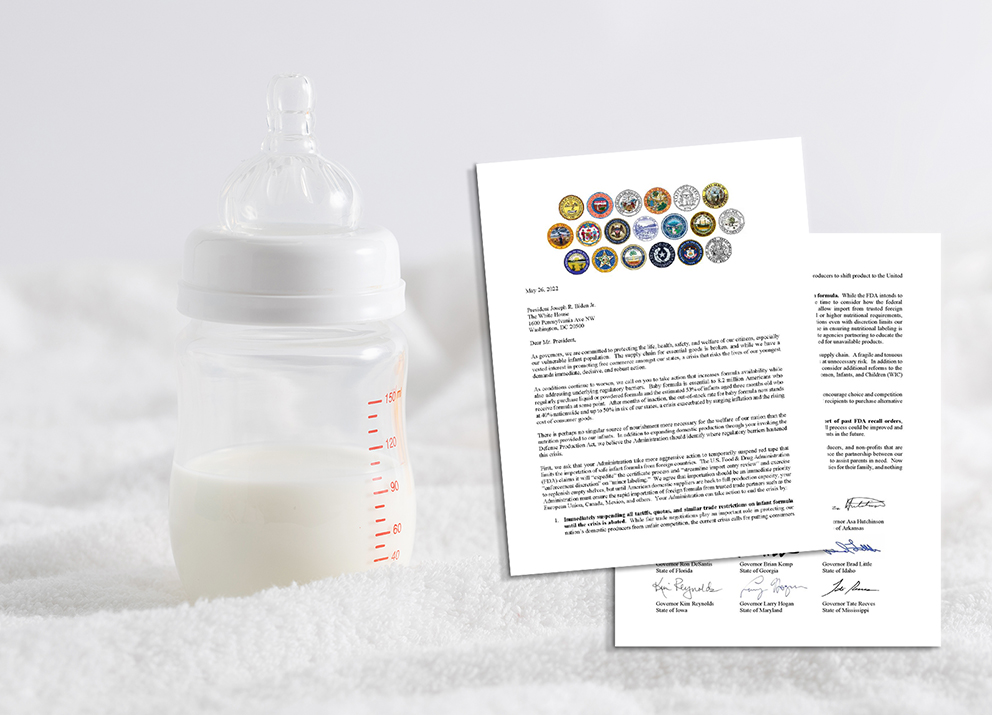 Governor Brian P. Kemp has joined 18 other governors in calling on the Biden Administration to take immediate, decisive action to ease the strain parents are experiencing due to the nationwide baby formula shortage.

The coalition sent a letter detailing their concerns and additional courses of action to President Biden.

“Baby formula is essential to 8.2 million Americans, and after months of inaction by the federal government, the out-of-stock rate for baby formula now stands at 40 percent nationwide,” said Governor Kemp. “This crisis has been exacerbated by surging inflation and the rising costs of consumer goods, and President Biden and the U.S. Food and Drug Administration have failed to adequately address the nationwide formula shortage. Instead of shifting blame and delaying action, my fellow governors and I are imploring them to take additional steps to increases formula availability while also addressing the underlying regulatory barriers that led to a shortage of this significance.”

Governor Kemp renewed the State of Emergency for Supply Chain Disruptions via Executive Order 05.26.22.01. The order prohibits price gouging of baby formula. If Georgians feel they have fallen victim to price gouging, they should contact the Office of the Attorney General.

As governors, we are committed to protecting the life, health, safety, and welfare of our citizens, especially our vulnerable infant population.  The supply chain for essential goods is broken, and while we have a vested interest in promoting free commerce amongst our states, a crisis that risks the lives of our youngest demands immediate, decisive, and robust action.

As conditions continue to worsen, we call on you to take action that increases formula availability while also addressing underlying regulatory barriers.  Baby formula is essential to 8.2 million Americans who regularly purchase liquid or powdered formula and the estimated 53% of infants aged three months old who receive formula at some point.  After months of inaction, the out-of-stock rate for baby formula now stands at 40% nationwide and up to 50% in six of our states, a crisis exacerbated by surging inflation and the rising cost of consumer goods.

There is perhaps no singular source of nourishment more necessary for the welfare of our nation than the nutrition provided to our infants.  In addition to expanding domestic production through your invoking the Defense Production Act, we believe the Administration should identify where regulatory barriers hastened this crisis.

First, we ask that your Administration take more aggressive action to temporarily suspend red tape that limits the importation of safe infant formula from foreign countries.  The U.S. Food & Drug Administration (FDA) claims it will “expedite” the certificate process and “streamline import entry review” and exercise “enforcement discretion” on “minor labeling.”  We agree that importation should be an immediate priority to replenish empty shelves, but until American domestic suppliers are back to full production capacity, your Administration must ensure the rapid importation of foreign formula from trusted trade partners such as the European Union, Canada, Mexico, and others.  Your Administration can take action to end the crisis by:

Longer term, we believe it is important to improve America’s domestic supply chain.  A fragile and tenuous supply chain for essential infant formula puts our economy and families at unnecessary risk.  In addition to taking federal trade and regulatory action, your Administration should consider additional reforms to the U.S. Department of Agriculture Supplemental Nutrition Program for Women, Infants, and Children (WIC) and the FDA recall order process by:

Finally, we must recognize the important partnership with retailers, producers, and non-profits that are going above and beyond to meet the challenge.  We stand ready to enhance the partnership between our states and the federal government as well as the private and public sectors to assist parents in need.  Now is the time parents need the assurance that they can provide the basic necessities for their family, and nothing is more critical than infant formula.