Jimmy and Rosalynn Carter to Celebrate 75 Years of Marriage 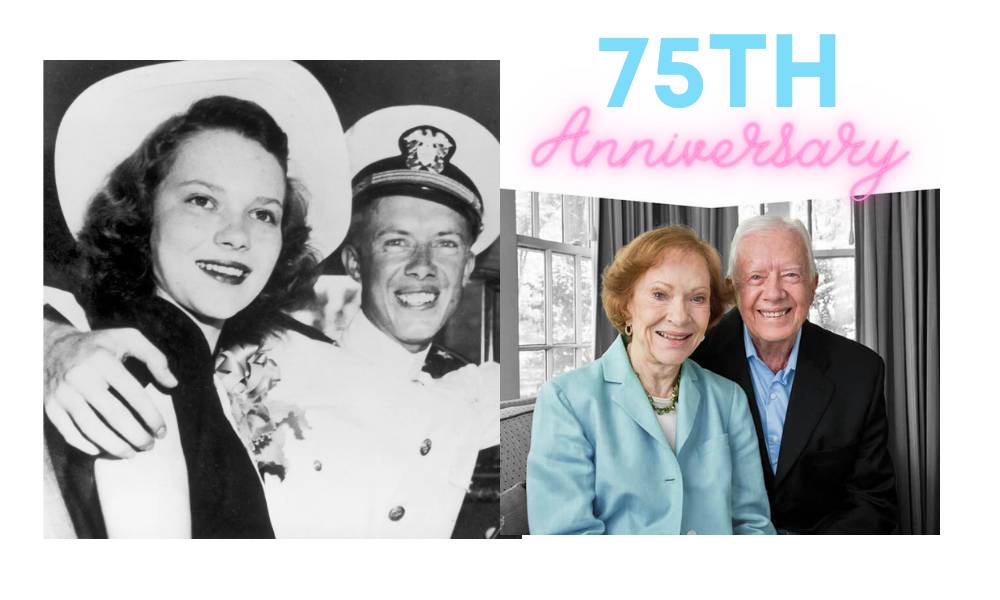 On July 7, 1946, James Earl “Jimmy” Carter marries Eleanor Rosalynn Smith at the Plains Methodist Church in Plains, Georgia. When the couple met, she was 18 and working in a hair salon. He was 21 and a recent graduate of the Annapolis Naval Academy.

During the first seven years of their marriage, Jimmy and Rosalynn, as she was called, lived in a variety of places, as he was given different assignments with the Navy. Though he had hoped to make the Navy his career, his plans changed when his father died in 1953. Jimmy took over the family peanut farm in Plains, Georgia, while Rosalynn ran the financial end of the business and raised the couple’s four children. She supported her husband’s first two failed political campaigns–for state senator in 1962 and for governor in 1966– and shared in his success in 1970 when he won the governor’s race. The couple moved to Atlanta and, as Georgia’s first lady, Rosalynn began a lifelong commitment to improving services for the mentally ill.

When Carter won the presidency in 1976, Rosalynn took advantage of her position to advocate for new legislation to protect the rights of the mentally ill, senior citizens and women. She even traveled as Carter’s representative to meetings in Central and South America and liaised with policy leaders on issues such as human rights, arms reduction and trade. She set up an office in the East Wing of the White House, from which she conducted White House business and her own personal projects. Both she and her husband projected a casual profile of accessibility during his term in the White House. Carter liked to wear cardigan sweaters instead of suits while at work and he and Rosalynn eschewed the traditional limousine ride from the Capitol to the White House in favor of walking at his inauguration. Although they presented a low-key, down-to-earth image, the couple kept up busy schedules and rarely took vacations. Still, they managed to arrange to regularly meet for meals with their young daughter Amy in the White House residential quarters.

By 1980, Carter had become embroiled in the Iranian hostage crisis and was struggling to lead the nation out of an ongoing energy crisis complicated by high inflation. As he chose not to spend too much time away from the White House to pursue a second presidential campaign, Rosalynn stepped in and appeared at many campaign rallies on his behalf. Although Carter failed to win a second term, losing to Ronald Reagan, he and Rosalynn stayed active in national and international affairs. In 1982, they founded the Carter Center in Atlanta to advocate for human rights and to alleviate “unnecessary human suffering” around the world. Since 1984, the Carters have given their time each year to build homes and raise awareness of homelessness with the international charitable organization Habitat for Humanity.

In 2002, Carter won the prestigious Nobel Prize for his efforts to find peaceful solutions to international conflicts, to advance democracy and human rights and to promote economic and social development. The couple currently age 96 and 93 lives in Plains, Georgia.