GPA: Port of Savannah to Expand Container Capacity by 60 Percent 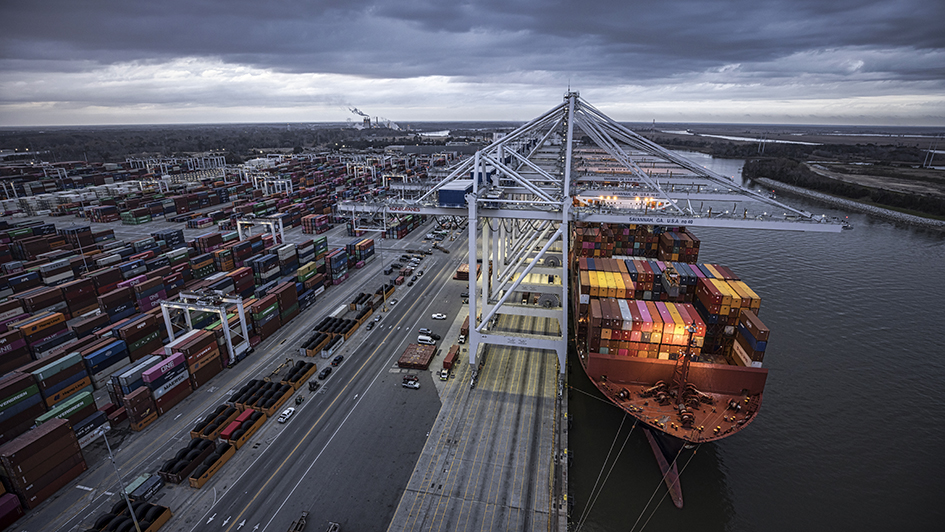 Eight cranes begin work on the 13,000 TEU container ship Ulsan Express at the Georgia Ports Authority Garden City Terminal, Wednesday, Feb. 2, 2022, in Savannah, Ga. (GPA Photo/Stephen B. Morton)
At yesterday’s Savannah State of the Port, Griff Lynch, Georgia Ports Authority’s (GPA) executive director, unveiled plans to expand the port’s container capacity by 60 percent. The enhancements will bring the Port of Savannah’s annual capacity from 6 million twenty-foot equivalent container units to 9.5 million TEUs by 2025.
“Our expansion is being matched by incredible growth in both warehouse space and workforce,” Lynch said. “The public and private investment that we’re seeing, as well as the number of people being drawn to the business, make Savannah the hottest market in the country for transportation and logistics.” 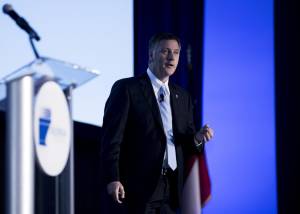 Griff Lynch, executive director of the Georgia Ports Authority, delivers his 2022 State of the Port address, Thursday Feb. 24, 2022, at the Savannah Convention Center. Lynch updated a capacity crowd on infrastructure projects that will ensure the smooth flow of cargo. (Georgia Ports/Stephen B. Morton)

Projects now under way will add 1.7 million TEUs of annual capacity in four months. GPA’s Peak Capacity project has already added 400,000 TEUs in container handling space to the Garden City Terminal and will make room for another 820,000 TEUs by June. In the same month, a new container yard just upriver will add another 500,000 TEUs of capacity. Separately, the Garden City Terminal West project will add up to 1 million TEUs in phases by 2024.
“GPA’s role facilitating commerce – even in difficult times – is key to Georgia’s long-term economic success, and I am proud of the can-do spirit that sets our ports apart from the rest of the nation,” said Georgia Gov. Brian Kemp. “The Ports of Savannah and Brunswick together play a major role in positioning Georgia as the go-to state for economic development, and I am thankful for all the hardworking men and women who have hunkered down to move Georgia forward over the past year.” 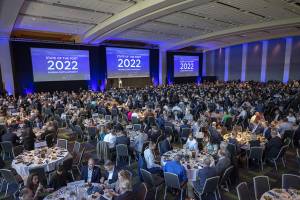 The 2022 State of the Port address, Thursday Feb. 24, 2022, at the Savannah Convention Center. Lynch updated a capacity crowd on infrastructure projects that will ensure the smooth flow of cargo. (Georgia Ports/Stephen B. Morton) 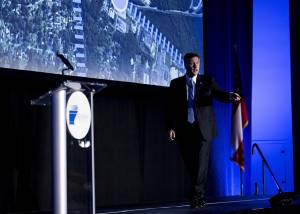 During Lynch’s presentation, he showed how Savannah has become a national leader in supply chain solutions and effectively eliminated its backlog, while accommodating 18 consecutive months of growth. In Calendar Year 2021 alone, the GPA moved a record 5.6 million TEUs, for an unprecedented expansion of nearly a million TEUs, or 20 percent, compared to 2020.
In his comments before a capacity crowd, Lynch addressed a series of key logistics solutions, including the role six pop-up container yards – which add 500,000 TEUs of annual container space – are playing as a supply chain relief valve. He also spoke to the nation’s trucker shortage, and how Savannah has reversed that trend by registering 80 new drivers a week to serve Garden City Terminal, or a total of 1,200 new drivers and 370 new trucking companies just since November. Lynch also detailed GPA’s workforce development effort, the YES+ program. Now, in addition to hiring new high school graduates to work in maintenance and container operations, GPA has broadened the program to include career opportunities for young workers in other departments.
“Higher demand for our services is the reason we have expedited major expansions at the Port of Savannah,” said GPA Board Chairman Joel Wooten. “Georgia’s growing manufacturing, distribution and retail sectors will mean additional cargo through the Port of Savannah, driving the need for increased container handling capacity.” 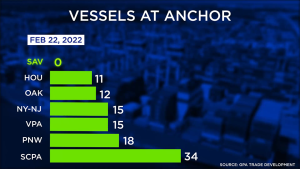 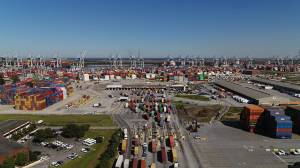 The Savannah market added 6.5 million square feet of industrial space in 2021, for a total of 84 million, according to Colliers International. Savannah led the nation in terms of net absorption of overall inventory, so the vacancy rate remains at 2.3 percent. Another 17 million square feet are now under construction, lifting the market beyond 100 million square feet to better accommodate heightened cargo volumes.
Lynch thanked the 1,200 guests for coming to the first live State of the Port since 2019, and congratulated them on persevering through the previous, challenging year. The unprecedented level of trade crossing GPA’s docks is expected to continue well into 2022, Lynch said.
To ensure Savannah’s ability to handle these volumes, GPA is super-sizing its Berth 1, increasing on-dock capacity by 25 percent. In the spring of 2023, the expanded berth will allow Savannah to simultaneously serve four 16,000-TEU vessels as well as three additional ships. The renovations will add an estimated 1.5 million TEUs per year of berth capacity. 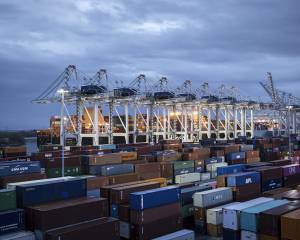 Another game changer for the GPA is the Savannah Harbor Expansion Project, which will come online in March. The deeper river channel will allow 16,000+ TEU vessels to take on heavier loads and transit the river with greater scheduling flexibility.
“This project has been more than 20 years in the making,” Lynch said. “Through it all, there has been strong support across several administrations, from the General Assembly and our congressional delegation. A special debt of gratitude goes to the late Senator Johnny Isakson, who shepherded our harbor deepening efforts through the federal process.” 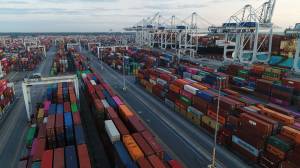 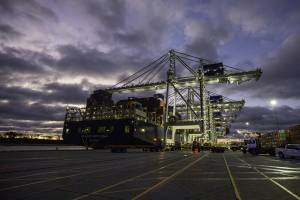