The restaurant, located in Hapeville, pays tribute to its iconic history with a redesign and expanded dining offerings 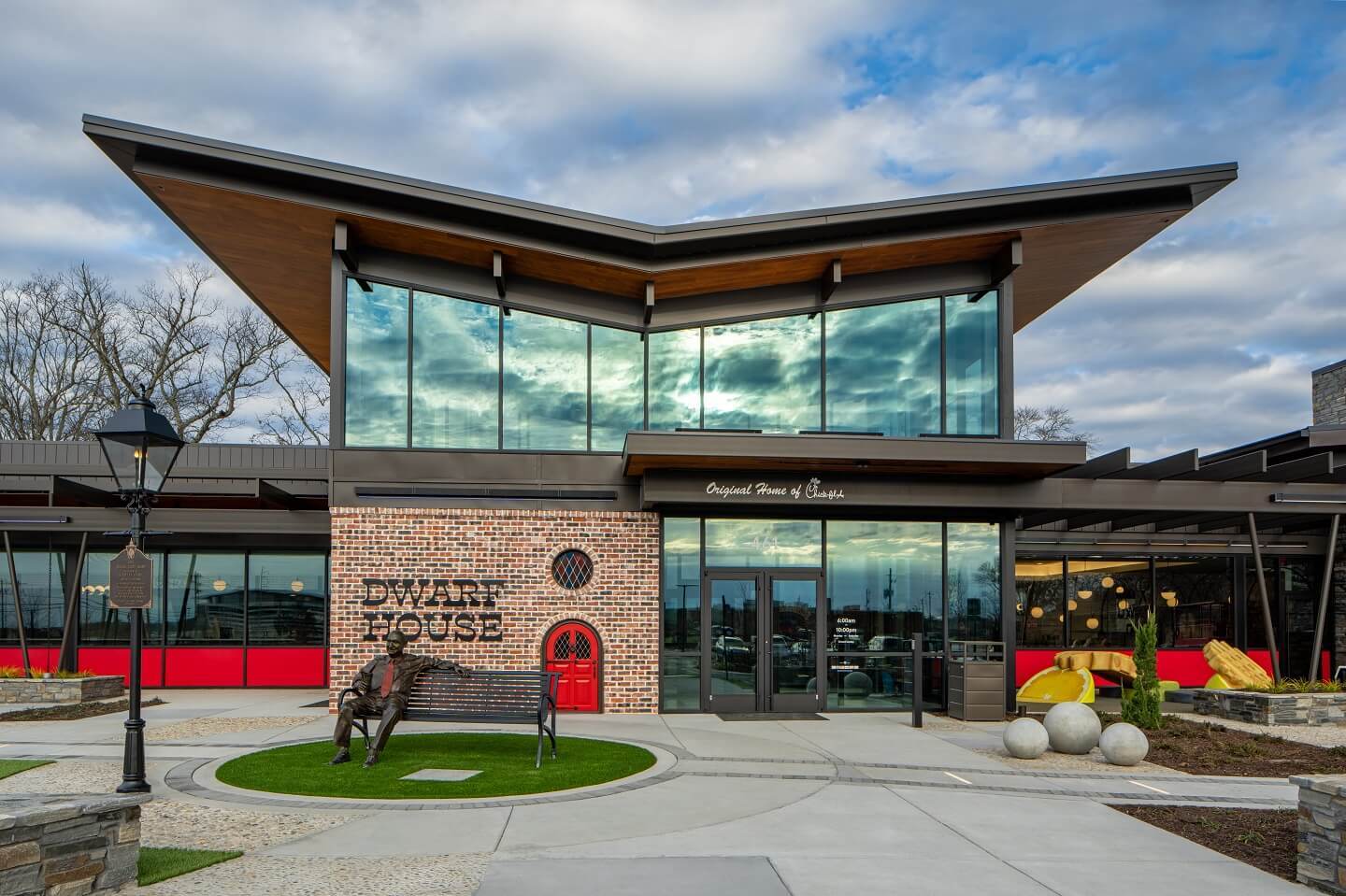 Chick-fil-A’s iconic Dwarf House, the birthplace of the Original Chick-fil-A Chicken Sandwich, recently reopened on February 17 after a nine-month renovation. The restaurant first opened its doors in 1946 and was last renovated in 1967. It’s located in Hapeville, Georgia.

In a newly designed, mid-century modern space featuring a full-service dining room, drive-thru with increased capacity and mobile order pick-up area for convenient service, the renovated restaurant also conserves 16 artifacts from the original building and includes new storytelling elements. From a pie shop to murals to exclusive merchandise, The Dwarf House is designed to be both a full-service restaurant and a destination that tells the story of where it all began for Chick-fil-A.

What’s new and what remains:

The Dwarf House restaurant first opened in 1946 and was last renovated in 1967. The latest renovation, which broke ground in May 2021, more than doubles the restaurant’s operational capacity and modernizes the space while honoring the restaurant’s rich history.

“This is a great reflection of my granddad’s entrepreneurial spirit and total commitment to excellent customer service,” said John White IV, president of S. Truett Cathy Brands. “Years before his passing in 2014, my granddad was thinking ahead by purchasing nearby property anticipating its inevitable expansion. Although my grandparents aren’t here to see this amazing restaurant, I’m confident they would be proud of the way we have brought to life his entrepreneurial journey through this design.”

More than 500 hours of research including interviews with Team Members and customers helped shape the stories that the redesign will bring to life. The unique design elements that tell the timeless history of the restaurant and local Hapeville community include:

“The restaurant authentically tells the living legacy of S. Truett Cathy and Chick-fil-A,” said Jenn Allstun, who led the design of The Dwarf House. “For every single piece of the building we chose—down to the pavers in the parking lot or the designs in the floor—there had to be a story or intention behind it.”

History of the Dwarf House:

Chick-fil-A founder S. Truett Cathy opened the Dwarf House in 1946 and, with taste testing from his customers, developed the recipe for the Chick-fil-A® Chicken Sandwich in 1964. Originally open 24 hours a day, six days a week, the diner-style restaurant serves the Chick-fil-A menu as well as items from Truett’s original menu, which includes staples like the famous “hot brown” (chicken mixed with cream sauce, cheese and bacon), hamburgers, coleslaw and lemon pie.

The original 1946 space only had capacity for 10 stools and four booths, so Truett and his brother, Ben, named the restaurant The Dwarf Grill because of its modest footprint (later renamed The Dwarf House). But despite its small size, it quickly grew to be a beloved restaurant for Hapeville residents, workers at the nearby automobile plant, as well as travelers from all over the world due to its proximity just three miles from the Hartsfield-Jackson Atlanta International Airport.

In 1967, the original restaurant was replaced with a larger structure to meet customer demand; this restaurant stood until the 2021 remodel process began.

“Truett was committed to this restaurant and this community, and even lived next door to the restaurant so he could wake up at any hour of the night to be there to serve his customers whenever needed,” said Kevin Moss, who was hired by Truett Cathy with a handshake agreement. He has served as executive general manager of the Dwarf House for 25 years. “His entrepreneurial spirit really inspired this renovation so we can meet the needs of our customers while celebrating something Truett always said, ‘No matter how big we grow, this will always be home.’”

The Dwarf House is located at 461 N Central Ave., and is open from 6:00 a.m. to 10:00 p.m., Monday through Saturday. For the latest updates on The Dwarf House, visit the restaurant’s website or Facebook page.

GPA: Port of Savannah to Expand Container Capacity by 60 Percent
More Than $422M Awarded to Reinforce Water and Sewer Infrastructure in Communities Across Georgia
Posting....