Meders was sentenced to death more than two decades ago for the 1987 murder of Don Anderson in Glynn County. 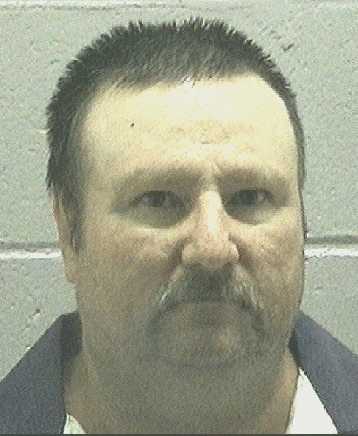 An execution date for Jimmy Fletcher Meders has been set for January 16, 2020 at 7:00 p.m. Attorney General Chris Carr offers the following information in the case against Meders for the 1987 murder of Don Anderson.

On December 30, 2019, the Superior Court of Glynn County filed an order setting the seven-day window in which the execution of Jimmy Fletcher Meders may occur to begin at noon, January 16, 2020 and ending seven days later at noon on January 23, 2020.  Meders has concluded his direct appeal proceedings, and his state and federal habeas corpus proceedings. 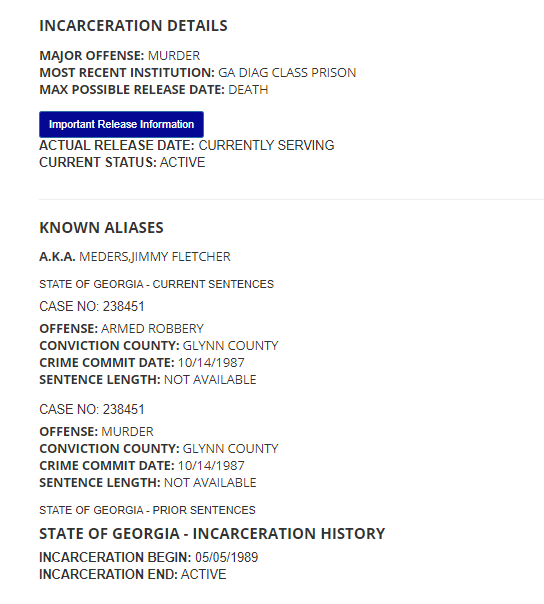 Meders spent the afternoon and evening of October 13, 1987, in the company of three other men: his employer, Randy Harris; Harris’ cousin Bill Arnold; and a friend of the latter, Greg Creel. The four began drinking that afternoon and continued drinking into the evening. Harris eventually parted company with the other three to entertain a teenage girl in a motel room. Meders and the other two borrowed Harris’ car and spent a few hours bar-hopping. At 2:30 a.m., Creel stated he was hungry. They stopped at a convenience store. Arnold stayed in the car, while Creel and Meders entered the store. Creel went to the back of the store to warm a package of sausage-biscuits in the microwave oven. Meanwhile, Meders made a small purchase. When the cashier opened the register, Meders shot him in the chest with a .38 caliber revolver. The victim hit the wall and fell to the floor. Meders then shot him again, in the head.

Creel ran out of the store to the car when the first shot was fired, leaving his food behind. After removing the money from the cash drawer (and triggering a silent alarm in the process), Meders joined the other two before they could leave without him. They drove to a trailer park, where Arnold and Creel got out. After offering the other two a share of the take — which they declined — Meders left them and drove to Harris’ motel room. He woke Harris and told him he had “just blowed a man’s head off over thirty-eight dollars.”

Meders was soon arrested. Some of the “bait” money from the store, whose serial numbers had been recorded, was found in Meders’ wallet after he was arrested. Seventeen food stamps were found in the pocket of his coat. The murder weapon was found under the mattress of his waterbed.

Meders appealed his convictions and sentence to the Georgia Supreme Court.  On February 28, 1990, the Georgia Supreme Court ruled on other enumerations of error, Meders v. State, 260 Ga. 49 (1990), but remanded Meders’ case to the trial court for a hearing on the issue of whether he received effective assistance of trial counsel.  On July 10, 1991, following the remand hearing, the trial court entered an order finding Meders had failed to establish ineffective assistance of counsel.

Meders filed a petition for a writ of habeas corpus in the Superior Court of Butts County, Georgia on April 2, 1993.  Evidentiary hearings were held on November 28-29, 1995 and December 27, 1995.  On September 22, 2005, the state habeas corpus court entered an order granting habeas relief as to Meders’ convictions and death sentence finding that he received ineffective assistance of trial counsel. The State appealed to the Georgia Supreme Court, which reversed the habeas court’s order and reinstated Meders’ convictions and death sentence on June 12, 2006.  Schofield v. Meders, 280 Ga. 865 (2006).  The United States Supreme Court denied Meders’ request to appeal on January 8, 2007.  Meders v. Schofield, 549 U.S. 1126 (2007).

Meders filed a petition for a writ of habeas corpus in the United States District Court for the Southern District of Georgia on July 24, 2007.  On September 19, 2007, the district court issued a stay in the federal habeas corpus proceeding and directed Meders to return to the state courts to exhaust his claims of ineffective assistance of appellate counsel.

The information above is from a press release from the Georgia Attorney General’s Office.