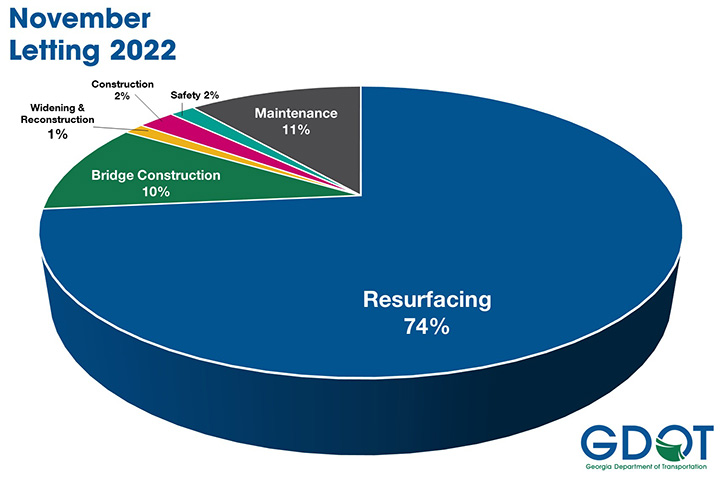 The largest single investment, worth approximately $16 million, was awarded to E.R. Snell Contractor, Inc. This resurfacing project consists of 11.06 miles of milling, plant mix resurfacing and shoulder rehabilitation on State Route (SR) 3 from SR 7 to the Henry County line in Spalding County. This contract, along with 21 other resurfacing contracts, represents 74 percent of the awarded funds.

The second largest contract is a maintenance project worth approximately $15 million. This project was awarded to Webber, LLC, and consists of 10.47 miles of concrete rehabilitation on I-75 from north of SR 96 to south of Sardis Church Road in Bibb, Crawford and Peach counties. This contract, along with two other maintenance contracts, represents 11 percent of the awarded funds.

Two percent of the awarded funds were allotted for a construction project. This project consisted of the construction of a roundabout on SR 138 at Union Church Road in Rockdale County. This contract is worth approximately $4 million.

The remaining one percent of the awarded funds were allotted for a widening and reconstruction project in Cherokee County. This project represents a $1.9 million investment and allowed for additional turn lanes on SR 140 at Avery Road.

See Award Announcement list below (includes rejected and or deferred projects). Bids for Design-Bid-Build projects were received on November 18, and contracts were awarded to the lowest qualified bidders on December 2.