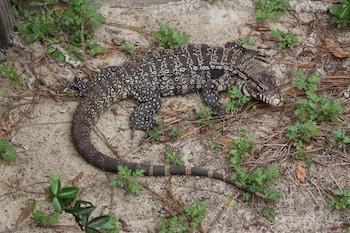 Warming temperatures will have tegus on the move in southeast Georgia. Reporting sightings of tegus, alive or dead, is needed to keep the big, South American lizards from gaining a foothold in the state, according to the Georgia Department of Natural Resources.

DNR has been working with the public and partners since 2018 to assess and remove what is considered a wild population of Argentine black and white tegus in Tattnall and Toombs counties.

These reptiles, the largest of all tegu species, can reach 4 feet long and weigh more than 10 pounds. Adaptable and hungry, Argentine black and white tegus pose a significant threat to native wildlife, from gopher tortoises to ground-nesting birds such as bobwhite quail, wild turkeys and whip-poor-wills.

As a non-native species, tegus in the wild can be trapped or killed on private property with landowner permission and in accordance with animal cruelty and local ordinances. But DNR wants to know about all sightings to better gauge the invasive lizards’ spread. Also, for key sites the agency can provide loaner traps, advice and even help monitoring, said Daniel Sollenberger, a DNR senior wildlife biologist.

“We are focusing our efforts to accomplish two goals: document the extent of where tegus occur in the wilds of southeast Georgia and remove those animals as soon as we can after they are detected,” Sollenberger explained. “With area residents, hunters and other folks helping us keep an eye out for and controlling tegus, we are cautiously optimistic we can control this population.”

While it’s not known where the tegus in Toombs and Tattnall originated – tegus are popular as pets – it’s clear they spell trouble in the wild. Sollenberger said that tegus are generalists in habitat, diet and the temperatures they can withstand. “They can live almost anywhere and eat almost anything.”

Studies by the U.S. Geological Survey, which helped fund tegu work in Georgia, suggest tegus could survive year-round in much of the southern U.S. Their appetite, which favors eggs (including those of protected species such as American alligators), can vary from pet food and plants to fruits, vegetables and small animals. There is also concern tegus could spread exotic parasites to other wildlife and cause bacterial contamination of crops. Research shows, too, that these reptiles, like most, carry salmonella.

In Tattnall and Toombs, residents have answered the call to report sightings. The sole tegu trapped last year was spotted first on a game camera and then caught in a trap loaned to a landowner, said DNR wildlife technician supervisor Jim Gillis. Of seven tegus collected in 2020, the public found or killed three. The tegus are analyzed at Georgia Southern University to determine their health and breeding status.

This year, Gillis said the DNR-led trapping will include streaming trail cameras that can be focused on live traps. “By using the remote cams, it will help cut the time needed to check traps.”

DNR also responds to occasional calls about tegus elsewhere in Georgia, from Valdosta to Columbus and Atlanta. These incidents usually involve escaped or illegally released pets and don’t point to a wild population in these areas. But the reports can serve as an important early warning. Once invasive species become established, they are almost impossible to eradicate.

Florida is up to four wild tegu populations and tegus have been reported in more than half of the state’s 67 counties. Trapping at one site along Everglades National Park can yield hundreds of tegus per season. Tegus also have been documented in the wild in South Carolina.

WHAT CAN YOU DO?