UGA baseball team hopes for bigger things after turnaround in 2018 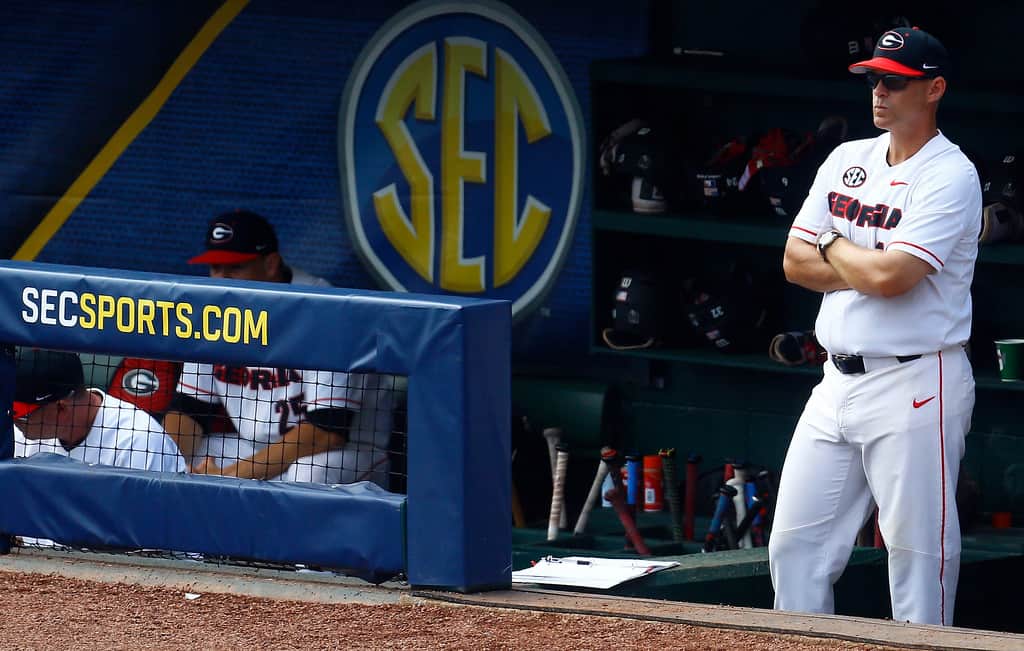 The future for the Georgia Bulldogs baseball team started on Tuesday.

And for the Bulldogs and their throng of fans, that was both bad and good.

Looking to the 2019 season and beyond wasn’t something Georgia was expecting to do this week. The Bulldogs had hoped to be hosting a super regional in the NCAA tournament with a berth in the College World Series on the line.

Instead, the Bulldogs were bounced from the national tournament Monday afternoon after losing back-to-back games against Duke in the Athens regional and thus saw their hopes for a trip to Omaha to play for the national championship dashed in flash.

But, the good news as the Bulldogs look ahead is that future appears bright for a team that had a turnaround season after four consecutive losing campaigns under current head coach Scott Striklin.

This season, a Georgia squad that was picked to finish fifth in the SEC East before the season opened ended up finishing with a 39-21 overall record that included an 18-12 mark in the conference which tied for the second best record in the league behind champion Florida.

The Bulldogs were awarded a top eight national seed for the NCAA tournament for only the fourth time in program history, but were one of four national seeds not to survive their own regional as the Bulldogs failed to advance from a home regional for the first time in school history.

Georgia wasn’t the only team to experience this misfortune, however. Three other national seeds also failed to move on as a regional host including No. 2 Stanford, No. 4 Ole Miss and No. 7 Florida State.

In all, eight of the 16 regional hosts in this year’s tournament did not survive the opening weekend.

The Bulldogs, much to their chagrin, were part of that surprisingly high number.

Georgia lost 8-5 to the Blue Devils and then 8-4 in the win-or-go-home regional final. The Blue Devils are now on their way to their first-ever super regional at Texas Tech this week. They had not won an NCAA tournament game in 57 years before their victory last Saturday over Campbell in an elimination game when they came back from an 8-1 deficit after six innings to win 16-8 after plating 11 runs in the ninth.

Against the Blue Devils, the Georgia pitchers could not cool off a red-hot offense that pounded out 22 hits and scored 15 runs against Troy to get to the Monday matchup against the hometown Dogs.

Also, the big bats in the Georgia lineup failed to produced in the final two games and thus the Dogs couldn’t match the offensive output by Duke that was necessary to advance.

Rather than moving on to a best-of-3 super regional meeting, Georgia was left to think of what might have been in an otherwise stellar season for the program.

“It’s extremely disappointing to be in the position we were in and not be able to advance,” said Georgia’s Striklin in his postgame press conference late Monday. “The more you accomplish, the more it hurts when it ends.”

The Georgia coach immediately went into spin mode, however, as he tried to accentuate the many positive takeaways from the 2018 campaign despite the sudden and disappointing finish.

Georgia’s 39 win were the most since 2008 when the CWS finalists had 45 victories and the 18 wins in the SEC were the most by the Bulldogs since the 2008 league championship club went 20-9-1 in the conference.

The national seed for the NCAA tournament was the team’s first since that 2008 season.

Also worth noting is that Georgia pitchers set a school record by holding opponents to a .236 batting average while also recording a school-record 532 strikeouts.

Georgia will say goodbye to five seniors including outfielder Keegan McGovern who led the team in batting average (.322), homers (18) and slugging percentage (.644).

A strong nucleus returns, however, as seven players from the starting lineup are scheduled to return next season including junior Michael Curry, who is expected to come back despite getting picked in the major league draft this week, and also fellow junior Adam Sasser.

Georgia will lose senior starting pitcher Chase Adkins and possibly junior left-hander Kevin Smith who was drafted in the seventh round this week by the New York Mets.

The Bulldogs have stockpiled plenty of young arms, however, and they received some good news this week when signee Cole Wilcox announced he would honor his scholarship offer from Georgia and not enter the professional ranks immediately.

The 6-foot-5, 220-pound right-hander from Heritage High was rated as the No. 19 overall prospect, but speculation is teams were turned off by his demand for a $3 million signing bonus.

Wilcox throws in the mid-90s, has a changeup in the mid-80s and can also throw a slider in the low 80s. He could instantly become the ace of the Georgia staff.

He is part of a strong recruiting class by the Bulldogs that features three other pitchers and also three position players. One of the position players is Glynn Academy standout Randon Jernigan, who played center field and batted leadoff for the Red Terrors.

Stricklin called the class ultra-talented and said he expected it to make an immediate impact on the program.

With expectations being that regional appearances should occur regularly for the Bulldogs, the team has increased hopes going forward.

“We’ve made it a long way,” said Georgia sophomore third baseman and pitcher Aaron Schunk. “This team was in a tough spot a couple years ago and Coach Stricklin and his recruiting process with all the guys in this room, we knew that we had something special and we knew we were building something great.