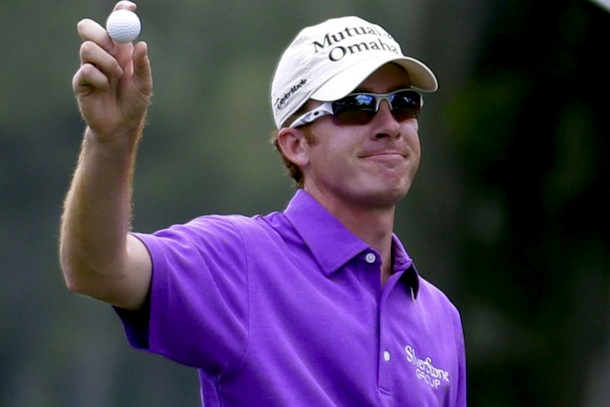 Several Georgia residents qualified for next week’s U.S. Open on Monday by advancing through the sectional qualifiers held around the country.

Among those getting through a 36-hole sectional qualifier where Atlanta residents Roberto Castro and Michael Hebert. The two players, along with Cananda’s Garrett Rank, were the three players earning Open spots from the 43-player field at the Ansley Golf Club’s Settindown Creek Course in Roswell.

Both Castro and Hebert also call the course their home track. Castro, a former Georgia Tech standout, joined the club in 2014 while Hebert has played there for more than a year.

Hebert will be making his first U.S. Open appearance next week at Shinnecock Hills Golf Club in Southhampton, N.Y.

He was obviously a happy man Monday evening.

“It was a lot of fun to play in front of my friends and the members here,” he said. “They were really encouraging and a lot of them showed up, so it was a lot of fun. I’m really glad they were here. It was a fun place to do it, for sure.”

Castro made a 12-foot birdie putt in a two-man playoff for the third and final qualifying spot from the Atlanta sectional. He will be playing in his fifth U.S. Open and hopes to make the cut for the first time at Shinnecock.

I’ve never played well (in the U.S. Open), so I’m going to do the Costanza and try to do the opposite of what I’ve always done,” Castro said. “It is a really true test. It’s exciting, it’s tough, and it humbles even the best players in the world.”

Also qualifying for Shinnecock on Monday was fellow Georgia Tech alumnus Ollie Schniederjans. He was among the 14 players qualifying from the 120-player field in the Columbus, Ohio, sectional which included several PGA Tour players.

Others qualifying from there were former Masters champion Adam Scott, Keegan Bradley and Shane Lowery.

Schniederjans was coming off a tie for 65th at the Memorial Tournament held at nearby Muirfield Village Golf Club.

He was a three-time All-American for the Yellow Jackets and was once the top-ranked amateur player in the world.

The Alpharetta golfer will be playing in just his second Open next week. His first was in 2015 when he ended the previous year as the No. 1-ranked amateur player.

Others coming up short in their attempt included former Georgia Tech standout Stewart Cink, Gene Sauers and Tim O’Neal, both from Savannah.

Reed won the Masters tournament back in April at Augusta National. That was the first major tournament of 2018. The Open will be the second, of course.