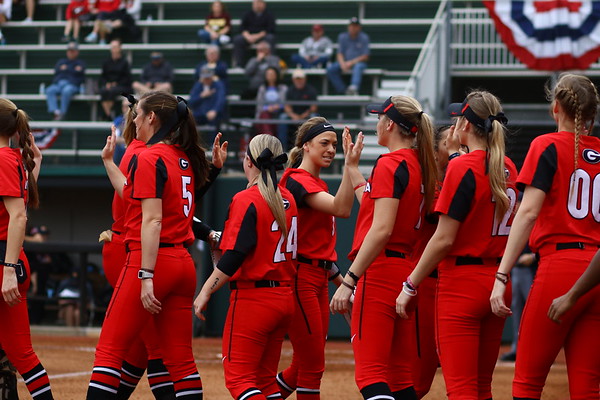 It will be Georgia versus Florida, but it won’t be in Jacksonville and it won’t be on a gridiron.

It will be the Bulldogs against the Gators in Oklahoma City on the softball diamond as the bitter rivals get set to clash Thursday in their opening game in the 2018 Women’s College World Series.

You wouldn’t know the two schools don’t like each other, though, based on the pre-tournament press conferences. The coaches for both teams showered the other side with praise.

“We have great respect for them, and every time we get a chance to play each other, it’s a great opportunity for both teams,” said Georgia head coach Lu Harris-Champer.

“What Georgia does year in and year out, what they do one through nine with their lineup and what they do with their pitching staff, they do a great job of preparing and they have tremendous athletes,” echoed Florida head coach Tim Walton.

Certainly, there wasn’t a funny Steve Spurrier one-liner in there from either side to add fuel to the already hot fire between the Bulldogs and Gators prior to their 7 p.m game Thursday which will be shown to a national audience on ESPN2.

But the action on the field should be hot when the rivals collide on women’s softball’s biggest stage at ASA Hall of Fame Stadium where eight teams are set to battle for this year’s national championship over the coming days.

The other four-team bracket for the double-elimation tournament includes No. 1 Oregon, No. 4 Oklahoma, No. 5 Washington and No. 8 Arizona State.

The two bracket winners will meet in a best-of-3 series to determine the national champion.

Of the eight teams remaining in the national championship race, Georgia has the least experience in the World Series as the Bulldogs are making their fourth appearance in Oklahoma City.

All of the other teams have been at least seven times. UCLA leads the way with 28 overall appearances including four in a row. The Bruins also lead all teams with 12 national titles.

Oklahoma has been seven of the last eight years and is trying to win a third consecutive national title this year.

None of that seems to matter to the Bulldogs, however. They feel like they belong in the championship hunt.

“We knew this team was special. We just had to get here,” said Georgia All-American shortstop Alyssa DiCarlo.

“We’re excited to play. We had a lot to prove, and now we’re here,” said sophomore second baseman Justice Mitz. “The players that have been here before, they’re happy to be here again. But it’s a different feeling this time. We want to win.”

Based on their seeding, the Bulldogs are the underdogs against the Gators in the tournament opener, but Georgia knows it can beat Florida because it already has.

In fact, Georgia took two of three games from the Gators in Athens when they met in their SEC regular-season series in mid-March.

The Bulldogs won the first game 5-4 before run-ruling the Gators 11-5 in five innings in the seconnd game. Florida avoided a sweep with a 5-1 victory in the final game of the series.

Georgia has also had recent success against the Gators in the postseason. The Bulldogs swept Florida in the 2016 super regional in Gainesville and also defeated the Gators 3-2 in the 2010 World Series.

“We kind of have a feel for Florida,” said Georgia three-time All-American Corni Emanuel, the starting left fielder. “We’ve seen their pitchers which can be comforting as well, but they’re still a top eight team, one of the last teams standings. We still have to go out and compete.”

The Bulldogs have fought their way to the World Series after losing ace pitcher Brittany Gray in early April to a season-ending arm injury. The senior right-hander was arguably the best pitcher in the country through the early months of the season as she held a 16-1 record and a 0.48 ERA when she was lost with a bicep injury.

Without Gray, Georgia has turned to right-hander Mary Wilson Avant and left-hander Kylie Bliss who have combined for a 27-6 record and a 1.70 ERA.

Avant, a sophomore from Stratford Academy in Macon, was Georgia’s winning pitcher in the 2-1 victory over Tennessee in the super regional last weekend which clinched the team’s berth to the World Series. Avant allowed just the one run to the Volunteers over the eight innings.

Georgia also has one of the country’s most explosive offenses. The Bulldogs are batting .339 as a team in the postseason with nine home runs.

DiCarlo is hitting .750 with four homers and eight RBIs. She has 20 homers for the season and ranks sixth in the country. For her career, she is seventh on Georgia’s all-time list with 44 round-trippers.

Emanuel leads Georgia with her .457 average. The slap-hitter also leads the country with 51 stolen bases and is second overall with 90 hits.

Georgia is a young team with just two seniors and one junior in the lineup. Only four players were on the team two years ago when the Bulldogs advanced to Oklahoma City.

Those players have told the rest of the team what it can expect to encounter at the World Series from the large crowds to all the television cameras catching the action on the field.

“We’ve tried to talk them through it,” said Emanuel, whose home run in the top of the eighth gave Georgia its 2-1 victory over Tennessee last week to clinch a spot in Oklahoma City.

For more info on Georgia at the World Series, visit GeorgiaDogs.com or NCAA.com.