Georgia meets the press at SEC Media Days, looking ahead to 2018 season 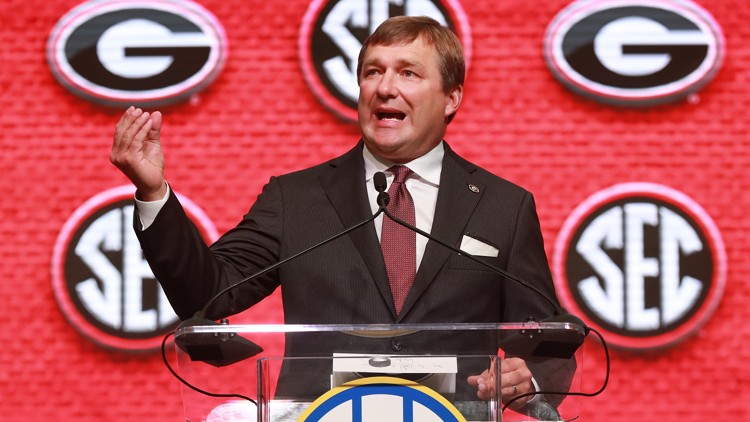 If you have watched any of the television coverage from this week’s SEC Media Days in Atlanta, you’ve seen the clips of the long touchdown pass that won Alabama the national championship and sent the Georgia Bulldogs to a crushing defeat in overtime to end one of the most amazing seasons in program history.

The Bulldogs can’t escape it. And they know it.

Kirby Smart saw it by accident on Tuesday morning. Georgia’s third-year head coach was watching the ESPN morning show “Get Up” before leaving his room in the Omni Hotel in downtown Atlanta and heading over to the adjacent College Football Hall of Fame to talk Georgia football with the hundreds of media members covering this week’s league spectacle.

It was the first highlight shown when the show hosts were talking about the Bulldogs.

“I thought they might open with the SEC Championship, but of course not. That’s part of it,” Smart said.

Smart said he reviewed the game film from the national championship game including that final play in the immediate aftermath of the game. That’s standard procedure, he noted, before quickly adding he hasn’t spent tons of time dwelling on what might have been.

And thus, if you walk the halls of Georgia’s football facility you want necessarily see that final play constantly showing on video screens. That game-clinching play is firmly etched in the memories of the returning players and that is enough to serve as a constant reminder about how close, yet how far away, the Bulldogs were to winning their first national title since 1980.

“I haven’t watched it a lot,” said Georgia junior defensive back J.R. Reed, one of three UGA players who accompanied Smart at media days, of the 41-yard touchdown pass throw by Alabama quarterback Tua Tagovailoa to receiver DeVonta Smith. “ I have watched the whole film. I watched the game a few times now. When it happens, it just happens. You know it is what it is. Those plays happen in football. Coach just tells us to do more.”

As Georgia looks to the new season, Smart hopes that final pass will ultimately become a part of the fabric of the championship-winning program he is building in Athens.

“I think how players will use that experience to grow, and I think that’s big for our program and understanding that if you do things a certain way, that you can get to certain places. We just have to be able to finish it when we get there.”

Georgia is set to move forward following its 13-2 season a year ago which included an SEC title, its first appearance in the College Football Playoff, a thrilling overtime win in the Rose Bowl and the narrow but gut-wrenching defeat to league rival Alabama in the national championship game at Mercedes-Benz Stadium in Atlanta.

But gone are senior leaders such as All-American middle linebacker Roquan Smith, the heart and soul of the defense, and running backs Nick Chubb and Sony Michel, two of Georgia’s all-time great ball carriers and arguably the top running back tandem in college football history.

It’s a given that the media will tab Georgia as its East Division pick at the end of the week, but the one prevailing question about this Bulldogs team is whether new leaders and new stars can emerge to lead this team back into the SEC title game and perhaps another berth in the playoffs.

Smart likes it that the Bulldogs are being questioned as they get ready to enter fall camp.

“Our guys embrace the challenge. You guys keep printing how many we lost, and I think that helps us. This gives us the chip on the shoulder that so many people want,” Smart noted.

“I’m excited to see them embrace this opportunity. I think the more you guys talk about what we lost, the more those guys say let me show you what I can do.”

Three of Georgia’s new leaders were with Smart at media days. They understand their roles in the locker room and what their leadership could mean to the overall success of the 2018 Bulldogs.

“We are focused on getting better everyday and improving on what we didn’t do or didn’t have last year. We are trying to instill in the younger players what has been instilled in us throughout the years,” said Georgia senior receiver Terry Godwin.

“We learned from the leaders on the team last year that it isn’t going to be easy. There are going to be bumps in the road, and we have to overcome them. We have to have everyone bought in on what Coach Smart wants with the younger guys and with the team. We just want to instill in them what the leaders last year instilled in us.”

The Bulldogs do return 13 starters – 8 on offense and 5 on defense – from last year’s SEC championship team. The general consensus is they will still be the class of the East division and will likely get another shot at the Crimson Tide, the favorite in the West division, in the league championship game in December.

Alabama will get the nod by the media to win the SEC title at the end of the season.

The Bulldogs know what the expectations are, but they are not different than before, Smart says.

“This season for us is going to be simple. It’s going to be the measure of potential versus effectiveness,” the coach explained. “And when I say that, a lot of people are like, yeah, every team has a certain amount of potential. I think potential is dormant ability. And I think effectiveness is what we get out of our potential. And we talk to our players all of the time, the pressure is really a privilege. You should feel privileged to have pressure to win games, to have expectations. Everybody is talking about the expectations.

“Last year this time, they were talking about the same expectations for the University of Georgia. I went back and reviewed my notes for this event, and it was the same thing. Georgia is expected to do this, to win the East, to win championships. Those are things we embrace at the University of Georgia. We can’t run from those things. We know that. If pressure is a privilege, how you manage that and how you embrace that and our coaching staff getting the effectiveness of our players out is what’s important to us.

“And that’s really the key ingredient for us going into this season.”

Georgia will open the 2018 campaign on Sept. 1 against Austin Peay. Kickoff is set for 3:30 p.m. at Sanford Stadium.