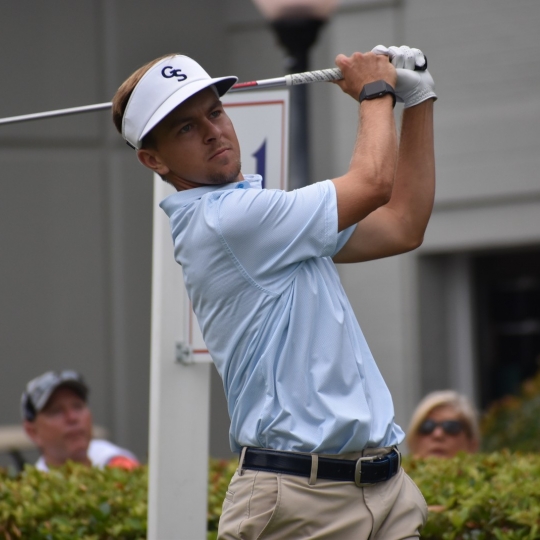 Brett Barron knows that now if he didn’t already.

The junior-to-be for the Eagles finished at 9-under-par 271 to claim a four-shot victory in the premier tournament hosted by the Georgia State Golf Association.

“I’ve always wanted to hold this trophy,” Barron said Sunday after accepting the winner’s hardware. “This is a dream come true for me. This is awesome. It means a lot.”

Barron is from Suwanee and played high school golf at Lambert where he was a two-time all-state player and helped the team to a state championship in 2015.

This past season, Barron played in eight tournaments with the Eagles and finished his sophomore campaign with a 73.73 scoring average which ranked fourth on the team.

Just last week, Barron played in the prestigious Golden Isles Invitational at Brunswick Country Club and finished tied for second with College of Coastal Georgia golfer Mark David Johnson. Both players shot 9-under and finished a stroke behind tournament winner Tye Waller who plays for the University of Georgia.

Barron’s four-shot win this week in Athens was the largest winning margin in the state amateur since former Georgia player and current PGA Tour member Russell Henley won by eight strokes in 2009.

With the victory, Barron earned a 10-year exemption into the state amateur and also secured a spot in this year’s Georgia Open.

Barron was the only player in the field to post four scores in the 60s over the four days of the championship which opened on Thursday. He shot 68-69-66-68.

He started the final round Sunday with a three-shot cushion and extended his advantage to five by the turn. No player got closer than four shots over the final nine holes.

Alex Ross of Atlanta, a sophomore at Davidson College, finished solo second at 5-under 275.

Two players, Jack Hall of Savannah and David Denham of Athens, tied for fourth at 3-under 277. Park Brady of St. Simons Island and Tyler Gruca of Alpharetta both finished at 2-under 278 to tie for sixth.

Rounding out the top 10 were three individuals at 1-under 279, including Preston Topper of Duluth, Taylor Smith of Covington and Ryan Stachler of Alpharetta.

This year’s tournament represented the 97th playing of the Georgia Amateur. Athens County Club was hosting the championship for the seventh time.

Column: Some brief notes on sports around the state
Georgia meets the press at SEC Media Days, looking ahead to 2018 season
Posting....