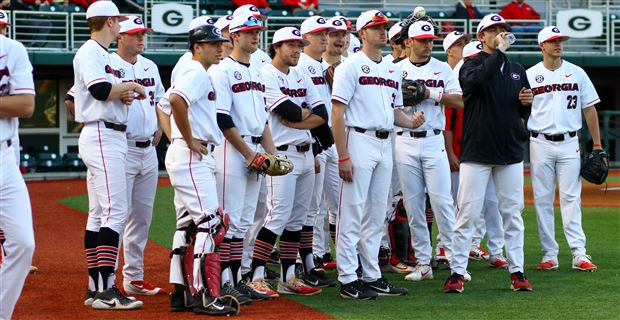 The Georgia baseball team is set to hunker down in Athens all the way to the College World Series in Omaha if the Bulldogs can make it that far.

The ninth-ranked Bulldogs learned on Monday they were awarded a top-eight national seed when the complete field for the NCAA tournament was announced on national television.

The Dogs are actually the No. 8 seed which means they are guaranteed to play at Foley Field on the Georgia campus in both the regionals and super regionals which determine who advances to play for the national championship in Omaha.

On Friday, Duke faces Troy at 2 p.m. while Georgia will play Campbell at 7:30 p.m. On Saturday, the two losers will face off in an elimination game before the two winning teams play for a spot in the regional championship later that evening.

The winner of Game 3 and loser of Game 4 will meet on Sunday in another elimination game before the first game of the regional final later on Sunday. A seventh game is slated for Monday if necessary.

“We are excited to be in the NCAA tournament and having an opportunity to host is a credit to how the team has performed this year along with the support of our fans and administration,” said Georgia head coach Scott Striklin in a school release.

“We look forward to playing again at Foley Field in front of our fans as they’ve done an outstanding job cheering us on all season.”

Georgia learned on Sunday that it had been selected as a host site for one of the 16 regionals across the country but had to wait until early Monday afternoon when the tournament selection show aired to see if it ha been awarded a national seed.

The team met at the school to watch the selection show and their meeting room erupted in jubilant celebration when Georgia’s seeding was announced. You can watch a video of the celebration by clicking here.

“There were a lot of deserving teams, and you look at everybody’s resume and when we got together as a team to watch the selection show, we didn’t know if we’d be getting one or not,” Stricklin said of a national seed.

“We got the nod and there was an explosion in the room when Georgia flashed up on the screen. We’re looking forward to playing again at Foley Field starting Friday night.”

This will be the 11th appearance for the Bulldogs in the NCAA tournament and their first since the 2011 season. It also will be their first NCAA appearance under Stricklin who is in his fifth season as the team’s head coach.

Georgia is a national seed for the fourth time in program history and is hosting its fifth regional. The Bulldogs have won their four previous home regionals, going on to the super regionals and also the CWS in 2001, 2004, 2006 and 2008.

Duke and Troy are both making their seventh appearance in the NCAA tournament while Campbell is in the tournament for the third time.

The winnner of the Athens regional will face the winner of the Texas Tech regional next week in the best-of-3 super regionals to see who advances to the CWS.

For more on the Athens regional, visit GeorgiaDogs.com.