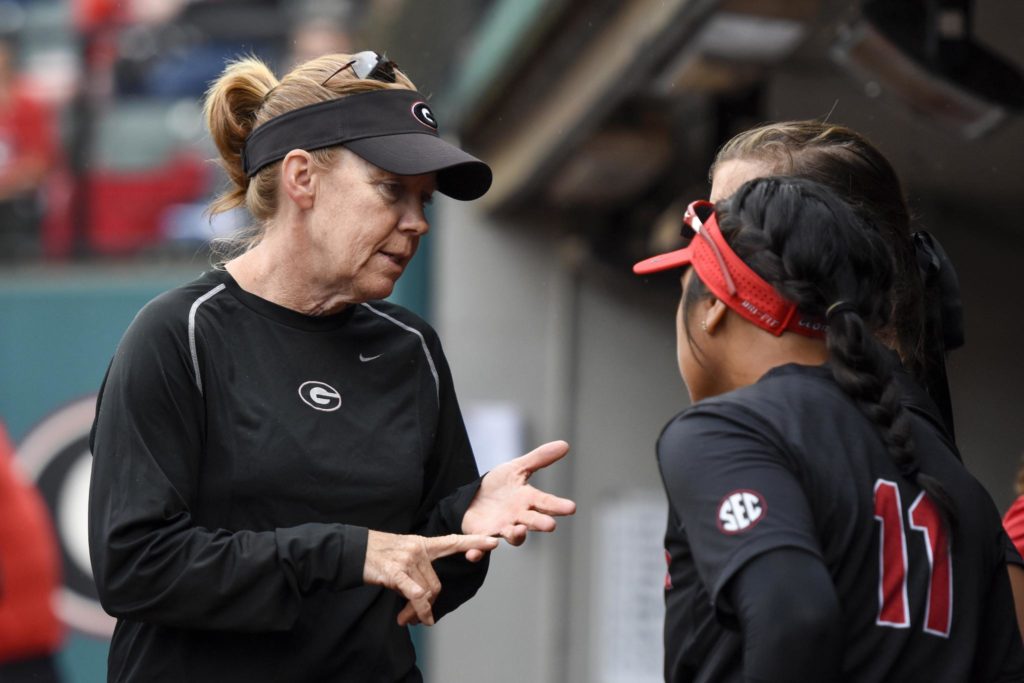 Super Regional at a Glance

The Georgia softball team is two wins away from advancing to the Women’s College World Series.

But, standing in the way of the Bulldogs and a trip to Oklahoma City to play for the national championship is a familiar opponent.

The best-of-3 Super Regional Series between the Dogs and Volunteers opens Friday in Athens. The second game of the set is scheduled for Saturday while a third game would be played Sunday if needed. All three games will be nationally-televised by ESPN.

Georgia and Tennessee are among the nine SEC teams still alive in the national tournament as the winners in the eight super regionals will advance to the world series. The other league teams still playing are Florida, Texas A&M, Kentucky, Alabama, Arkansas, LSU and South Carolina.

The SEC is guaranteed to send at least two teams to Oklahoma City as Florida and Texas A&M are also facing off in a super regional as are the Dogs and Vols.

The other five SEC teams who are in action in the super regionals could also advance, giving the league an opportunity to send as many as seven teams to the world series.

The only super regional that doesn’t involve an SEC team is the Pac-12 showdown between annual heavyweights Arizona and UCLA.

Georgia and Tennessee met during the regular season in Knoxville with Georgia taking two of the three games. The Vols won the opening game 1-0, but the Dogs bounced back to win the next two games by 9-1 and 8-0 in six innings under the eight-run mercy rule.

This weekend, Georgia has the luxury of playing at home at Jack Turner Stadium where the team is 33-4 this season.

Georgia has traditionally been strong at home in the NCAA tournament as well as it owns a 38-11 all-time tournament record in Athens.

The Dogs know playing at home has a huge upside.

“There is certainly always the comfort factor, the field, the layout, that kind of thing,” said Georgia associate head coach Tony Baldwin.

“But more than anything, it’s playing in front of our fans. We have a history of having a great fan base, and this year they’ve been particularly strong. Not only have they shown up in numbers, they’ve made a great presence, too. We look forward to seeing them out there this weekend, too.”

Georgia advanced to its 10th all-time super regional by going undefeated in last week’s regional which also was played in Athens. Georgia defeated Harvard 6-0 in its opening game before run-ruling Northwestern 12-0 in six innings and then defeating the Wildcats again 9-7 to advance to this weekend.

Over the three regional games, Georgia outscored the opponents 27-9 while hitting six home runs and batting .390 as a team.

In the blowout victory over Northwestern, Alyssa DiCarlo blasted three home runs to tie an NCAA tournament record. Only three other players have ever had three homers in a single game in tournament history.

DiCarlo leads Georgia with 19 homers for the season.

But, the Dogs do get solid pitching, too. The pitching staff has posted 22 shutouts this season and has a 1.61 ERA which ranks 11th in the country and fourth in the SEC.

This won’t be the first time Georgia and Tennessee have met in a super regional. They also faced off at this stage in the tournament back in 2012 in Knoxville with the Vols winning in three games.

Georgia is hoping to reverse its fortunes this go-round as it looks to advance to the world series for the fourth time overall and first time since 2016 when the Dogs upset rival Florida to get to Oklahoma City.