Column: Look out Mom and Dad! The Boogeyman has got his own app

When Jesse Weinberger talks about slamming her son’s smartphone with a sledge hammer, it’s not just for effect. She’s showing her audience that as a mother she is serious about saving our youth from a boogeyman that she says hangs out in children’s back pockets.

As a speaker, she can be hilarious. But as an author and a parent of two, she makes you think and she makes you scared. Weinberger is deadly serious about warning other mothers and fathers about the growing threat of allowing young people unsupervised, unrestricted access to the internet.

Her warnings are blunt:

° No smartphones before a child is 14.

° No social media for children under 13.

Weinberger was in town last week. She talked to students at several local middle schools and then met with groups of parents, children and teens at the First Baptist Church of Columbus. She was here a number of years ago at the invitation of the Pastoral Institute and Right From The Start . Her return was timely, given the proliferation of social media and high-tech devices in the lives of our young people.

One minute you’re laughing out loud. The next minute chills are practicing scales on your spine.

“The higher the number of minutes you’re on a device, the more unhappy you are,” she says.

That reminder applies to all of us, but her major concern is our youth. She warns that even seemingly mundane sites like Facebook and YouTube can be gateways into more serious apps and websites. She wants parents to be skeptical and she wants them to regularly monitor the sites our young people are visiting.

She has created a nasty fictional character that she calls “Ralph.” This person is lurking out there on the web. He is a sexual predator who wants to be our children’s friend. He tells them how cute they are. He compliments their hair. He enjoys the same music they do and he speaks their language. It’s easy for “Ralph” to find our kids and easy for our kids to find “Ralph.”

And yes. “Ralph” will travel. He could show up at your front door.

Only our children aren’t completely to blame.

“How do you get mad at a child for using the devices that we bought them?” she asks.

The ultimate solution is to take those devices away from them. (Or borrow her sledgehammer.)  But Weinberger reminds parents that the best way to curtail a child’s access is to cut down on our own usage. She also advises mothers and fathers to monitor and supervise and to have real consequences in place when our rules are broken.

Weinberger talks to thousands of children and youth each year as she travels from city to city talking about this growing issue. She says young people understand what’s happening and that many of them would welcome a solution.

“Your children want you to say no,” she says. “They want to use you as an excuse.” 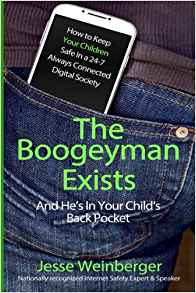 Nationally known speaker and internet safety expert Jesse Weinberger is the author of “The Boogeyman Exists: And He’s in Your Child’s Back Pocket.” The book is in its second edition and may be bought on her website. Click here to purchase.

Listen to the words of Jesse Weinberger

Last year I presented to over 70,000 students and gathered millions of lines of self-reported student data. Here’s what I’ve found consistently (regardless of socio economics, geography, or school type):

There is no question that children who have unfettered, unsupervised access to web-enabled devices are multiplying their risk of being a victim and/or becoming a perpetrator of cyberbullying, sexting, sexual predation, and human sex trafficking – not to mention the absurd amount of pornography which is being consumed by extremely young children.  The single thread which binds all of these risks together is access. Every single one of these risks requires access to the device in order to exist. Simply speaking:  minimizing your child’s access minimizes their risk.

Changing any single habit or behavior can be tough – changing several can seem almost impossible. However, if you think just in terms of time and location, it will be far easier to cultivate and enforce healthier digital behaviors.

No smartphones under 14 years old. In this case, the best place to begin is to not begin at all. A child under 14 years old has zero justification for owning a smartphone. (If there is a divorce situation – buy your child a flip phone.) Wherever you begin, your child will expect to expand on that starting point. If you bought an iPod Touch for your 8-year-old, the expectation to “upgrade” to a phone will come earlier rather than if the iPod Touch was gifted when the child turned 12 years old instead.

One-hour non-academic time per day. From that first day of school, the biggest difference in your child’s digital behavior comes from the reduced amount of time he has available to spend on devices. There are several studies suggesting that anything more than one hour of non-academic screen time per day increases your child’s digital risks. This solution also supports the idea of being mindful via proactive portion control versus reactively becoming a victim to the consequences.

Not on a school night.  A great solution, especially for students in 6th grade and younger –  no gaming or device use on school nights (Monday through Thursday). This is my favorite time-based solution mostly because it’s simple, super easy to enforce, travels easily with your child, and has fantastic outcomes.

Not before bed.  Regardless of the day of the week or the person (this means you too Dad)  no one in your home should be using their phone, tablet, or laptop less than one hour before bedtime. The blue light waves given off by a back-lit screen (versus a television) confuse your brain’s circadian rhythms into thinking it’s morning and it’s time to wake up. Additionally, this blue light can make a negative impact on the neural messages sent to your internal organs. If you look at your phone right before bed and you can’t sleep – that could be why.

Not after mom and dad have gone to bed. There comes a natural tipping point when children stay awake later than their parents. It’s very hard to keep an eye on what’s going on when, well, your eyes are closed. The easiest solution is to move the wifi/router into or near your bedroom and plug it into an outlet which has a timer. This way the power gets automatically shut off at X o’clock each night. The low tech solution? Yank the power cord out of the router as you head off to bed.

Not in the dead zone.  Create dead zones for technology in your home – these are specific locations where devices are forbidden. Here are a few suggestions: all cell phones (including mom’s and dad’s) can travel through the kitchen but can never stop at the dinner table … no devices should ever be sitting or charging on a nightstand … there should be zero posting, texting, or web surfing during a family outing — especially while eating, etc.

Create a charging station. At X o’clock every evening all cell phones should be placed in a predetermined charging location. This includes your child’s friend’s phones if they’re sleeping at your home. Be sure to make it clear to their parents that this rule is non-negotiable.

As parents, we’re expected to be infallible and omniscient – a tough combination. Mistakes and missed opportunities are inevitable. It happens to all of us. Going back to school in the fall is a natural time to re-engage. It might be hard, but don’t lose heart. You can do this.

Column: Should drag queens be reading children’s books to our kids?
COLUMN: My Time in the Slow Lane
Posting....