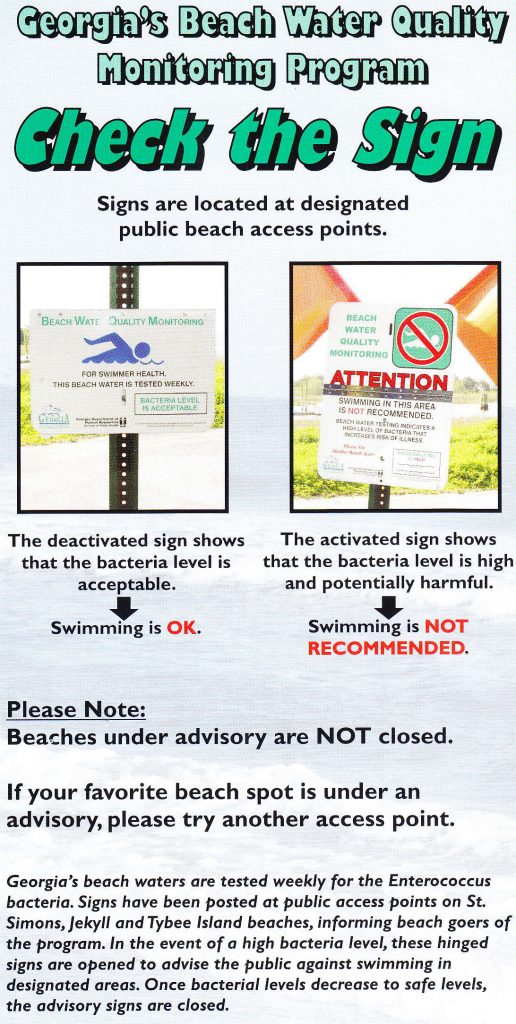 The Glynn County Health Department has lifted the swimming advisory for North Beach at Dexter Lane, which is from Tallu Fish Land to Brice Lane on Jekyll Island.

The advisory was issued on June 22, 2021 after routine water quality tests showed a high level of enterococci bacteria which increase the risk of gastrointestinal illness in swimmers.

Subsequent water samples show the bacteria level has dropped below the Environmental Protection Agency’s recommended limits. Therefore, the advisory has been lifted.

The Glynn County Health Department has issued a beach water advisory for North Beach at Dexter Lane, which is from Tallu Fish Lane to Brice Lane on Jekyll Island.

The Department of Natural Resources – Coastal Resources Division tests water samples on Glynn County beaches throughout the year. The tests screen for enterococcus (pronounced: en·ter·o·coc·cus) bacteria, which are found in humans and some wildlife. The testing program is not related to the capsized motor vehicle carrier in St. Simons Sound.

When a beach is under advisory, it means the level of bacteria found in the water is above the Environmental Protection Agency’s (EPA) recommended standards. This does NOT mean the beach is closed.

The beach water advisory alerts the public of a possible risk of illness associated with water contact in the advisory area. The Health Department recommends you do not swim or wade in the water in the area under advisory. Fish and other seafood caught from this area should be thoroughly washed with fresh water and thoroughly cooked before eating, as should fish or seafood caught from any waters.

The area will be re-tested this week, and the advisory will be lifted when the bacteria levels meet the EPA’s recommended standards.