Savannah now the top US port for ag exports

The Port of Savannah’s proximity to major producers, direct access via road and rail, broad global network and responsiveness to customer needs have recently made it the top port in the nation for the export of containerized agricultural goods. 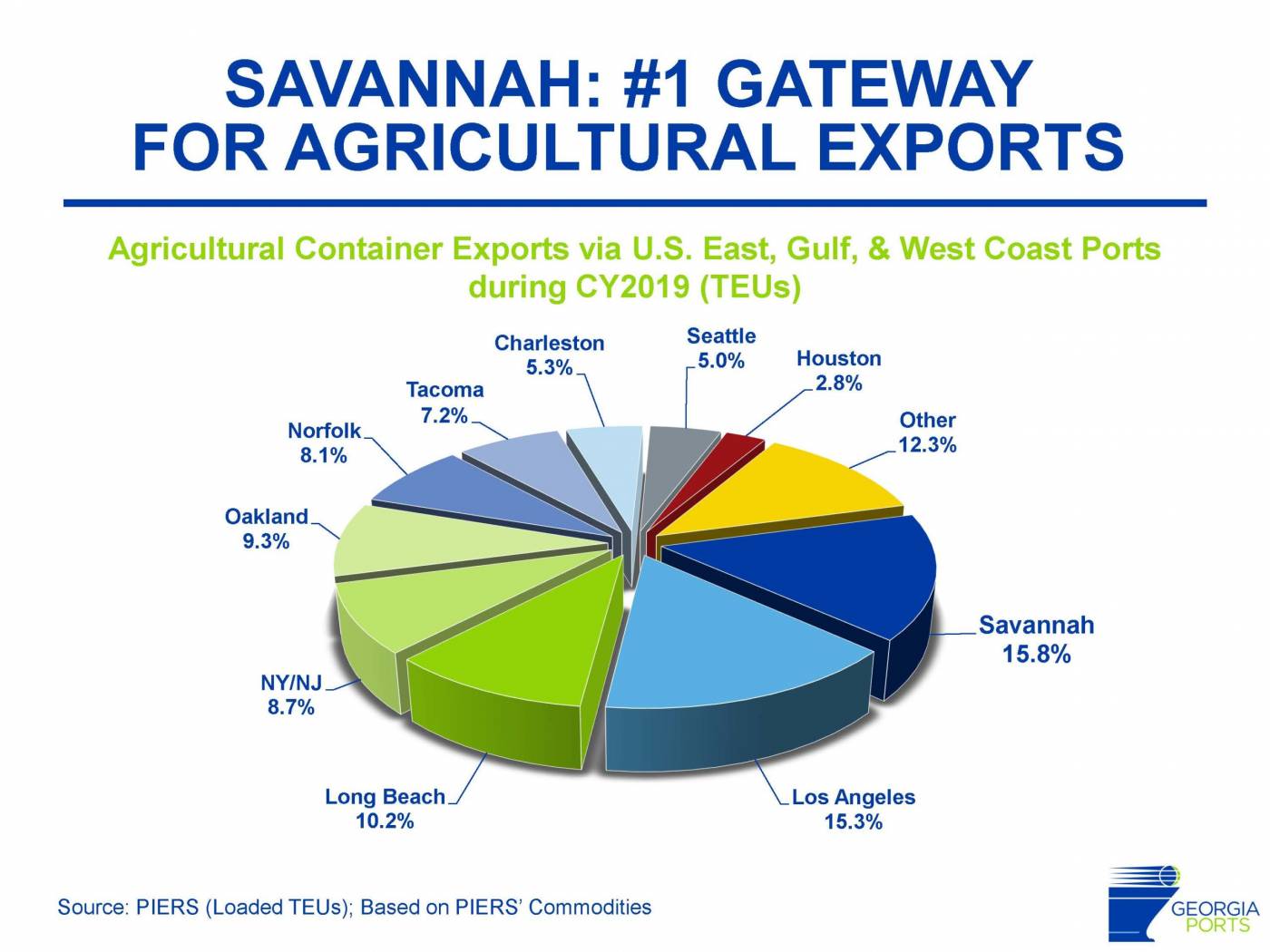 The Port of Savannah’s proximity to major producers, direct access via road and rail, broad global network and responsiveness to customer needs have recently made it the top port in the nation for the export of containerized agricultural goods.

“Agriculture is a major driver for Georgia’s economy, contributing $74 billion in annual economic benefit and nearly 400,000 jobs across the state,” said Georgia Gov. Brian Kemp. “As this country’s No. 1 port for the export of agricultural products, Savannah provides vital support for the state and nation, helping our farmers reach overseas buyers efficiently.”

In Calendar Year 2019, agriculture accounted for 60 percent of Savannah’s exports, or more than 843,000 twenty-foot equivalent container units. Forest products such as wood pulp, paper and logs made up the largest category of goods, followed by clay, cotton and poultry.

“The production of raw material and agricultural goods, along with their supply chains, have remained strong throughout the pandemic,” said Georgia Ports Authority Executive Director Griff Lynch. “The powerful commitment by the agricultural sector mirrors that of GPA’s employees, the International Longshoremen’s Association and the rest of our maritime logistics community.”

During the pandemic, GPA has focused on ensuring both chassis and empty containers are available to support the movement of export commodities. Through its association with the South Atlantic Chassis Pool II and the completion of a new on-terminal chassis yard, the Port of Savannah provides customers with access to the largest chassis pool in the Southeast. In addition, GPA’s team has focused on cargo owners and other contacts to ensure a reliable supply of containers.

On-terminal projects to expand export capacity have continued throughout the crisis, including the Mason Mega Rail, with the first nine of 18 new working tracks complete and two new rail-mounted gantry cranes slated to begin work in July.

GPA’s inland terminal, the Appalachian Regional Port, has seen increased volumes and export commodities coming from Northwest Georgia, Tennessee and Alabama. At the Port of Savannah, GPA has increased its on-time performance of vessel operations to achieve its best performance in three years.

“GPA’s laser focus on the seamless flow of export commodities and the impressive growth at the ARP have created new avenues for American farmers to serve international customers,” said GPA Board Chairman Will McKnight.

On Wednesday, June 24, Lynch addressed a webinar of more than 125 ag exporters, members of the Agriculture Transportation Coalition, which advocates on transportation policy as it impacts U.S. farmers. The largest organization of its kind, AgTC members include agriculture exporters and importers, freight forwarders, agriculture trade associations, and the state departments of agriculture.

Peter Friedmann, executive director of AgTC stated, “For our members, the cost-effective movement of goods is a key factor in the profitability of farm and processor operations; working with the leadership of the nation’s international gateways, such as Port of Savannah, serves mutual interests of the port and ag exporters in growing cargo volumes. We look forward to expanding these relationships, and appreciate Mr. Lynch’s most effective  dialogue with our members this week.”

Lynch was joined for the question and answer portion of the webinar by GPA Chief Operating Officer Ed McCarthy and Chief Commercial Officer Cliff Pyron.

“We were pleased to have such a productive discussion with the AgTC members,” Lynch said. “Savannah’s longtime service to commodity exporters and extensive on-terminal infrastructure for refrigerated goods makes GPA a strong partner for the agricultural community.”