Summerville and Trion Team up For Dominating Day on the Diamond 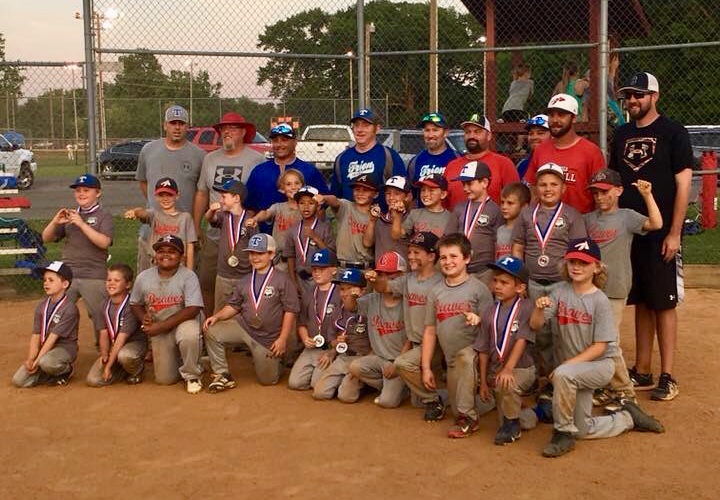 For those who’ve had kids pass through the recreation leagues of Chattooga County, one thing is certain, the county is known for producing great athletes. This undisputed fact was again illustrated on the diamond at the 2nd Annual “SBO Rec Jam” hosted by Jim Zander and Joe Janssen at the Calhoun Recreation Center. With ten of the top teams in the 8U youth baseball division competing in a single elimination bracket, Chattooga County sent two teams to battle it out among the heavy weights for baseball supremacy.

The Summerville Braves and Trion Bulldogs would be facing off against teams from throughout Northwest Georgia including, Gordon County Marlins, Gordon County Red Sox, Gordon County Cubs, Calhoun Braves, Calhoun Rays, Bartow A’s, Rome Diamond Dawgs, and the Cedartown Bulldogs. Each game was do or die, as the winner moved on and the loser… went home.

With the event taking place in Gordon County, the “home teams” were counting on a strong performance but, as the bracket played out, it became clear that Chattooga County brought two talent-laden teams that were intent on upsetting every opponent they faced. Tournament Director, Jim Zander remarked, “We had an excellent group of young athletes from Northwest Georgia play in our 2nd Annual SBO Rec Jam.” For the home crowds, the realization settled in after the semi-finals that Chattooga County would be the only county represented in the Final game as Trion won their contest and the Summerville Braves picked up a dominating, 14-2 win over the previously unbeaten Calhoun Braves.

“After watching all of the teams compete in our 7/8 year old division, I thought it was great to have two rival teams full of talented players from Chattooga County battle it out in the championship,” said Zander.

Summerville would finish their day undefeated (5-0) with a 15-5 win over Trion in the championship game, improving their season record to 20-0 and remaining undefeated.

Summerville’s Blaine Groce had the highest batting average with a staggering .933 average. “Jairdayn Winston, in my opinion, gets Player of the Tournament,” says Braves Coach, Will Allen. “He batted in the 4 spot and had 12 RBI’s, which included a 3-run homer over the fence.” Defense is what separates Summerville from other teams. Over the two days the Braves scored 76 runs and only allowed 26. “All of our kids played great defensively. It was hard for opponent’s to find a weak spot,” Allen said.

Trion Blue in the Finals

“Hard work and dedication shows results. Finishing 2nd makes these boys work even harder!! These kids maybe 7 & 8 years old, but they play ball like they have been playing together for ten years!!” Trion Coach Kelo Sagram said. “Very proud to be able to coach these kids and have the coaching staff like we have.”

After the championship game, both teams and coaches took time to celebrate the win and the dominating performance from the underdog county.

“I am very proud to be a part of such great talent. It says a lot about our county to go and end up playing each other. We all have a healthy competition with each, which makes it even more fun to play one another,” said Sagram.