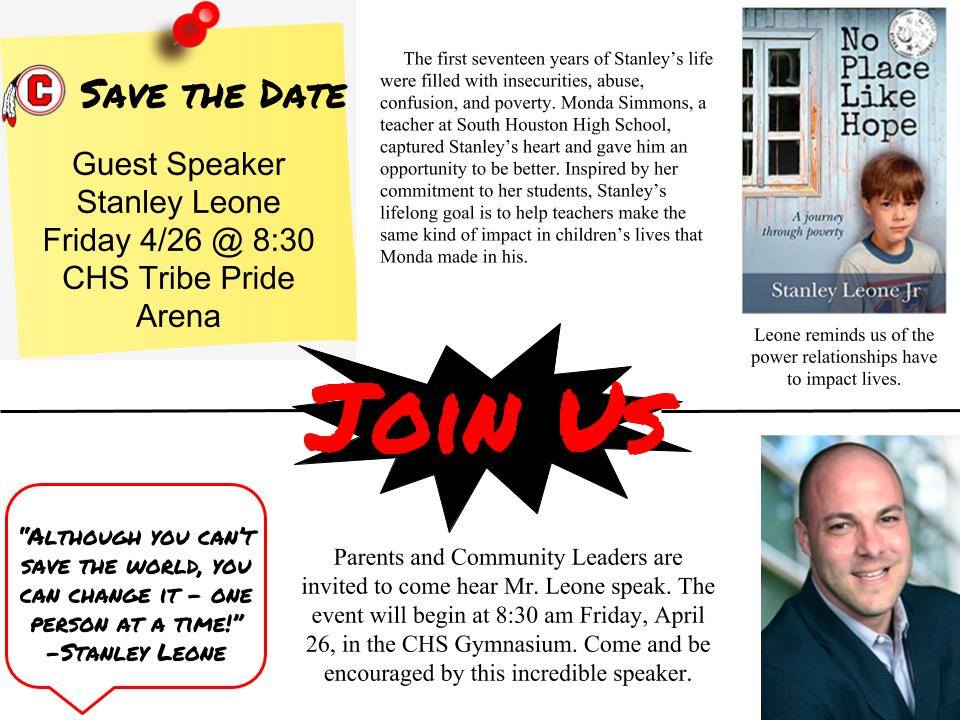 Sports teams hold pep rallies to excite the players, community, and student body in preparation of a big game and, at Chattooga High School, Principal Jeff Martin is making sure the academic year-end testing events receive the same level of attention with the annual Smash the Test rally.
Administrators at Chattooga High School are inviting all parents/guardians and community leaders to attend a testing “pep rally” featuring guest speaker, Stanley Leone.  “This is our state championship with testing coming up this is what our teachers work for every day, this is what our kids work for every day,” said Martin.
The event will be for grades 9-12, on Friday April 26th at 8:30 a.m. in the Tribe Pride Arena.

Martin first heard Stanley Leone speak at a RESA event and decided immediately he wanted the entire faculty and student body to hear his powerful message of how one teacher believing in a kid can in fact change the world.

“We are all born with a story, but we don’t all develop our message,” Stanley said. Stanley has spent the last 23 years sharing his message of how one consistent teacher enabled him to overcome his fate of being just another inner city kid. “I started speaking when I was 17-years old…and haven’t stopped.”

At age 13, Stanley Leone was a hardcore gun-wielding veteran of violence, drugs, and incarcerations in Houston, Texas. By high school, he was a fearless gang leader, drug dealer, and street thug charged with felony assault. Stanley said, “I remember the police came to my school, handcuffed me, and took me to jail. Beneath my bad-boy talk, I was hurting. I was insecure and scared.”

Sadly, for kids like Stanley the future was almost guaranteed to be filled with addiction, jail, and most likely an early death from gang-related violence.

Until, that is, he met a teacher who saw his potential and engaged Stanley in an amazingly transformational way. In his senior year, he met Monda Simmons and everything changed. Stanley shares, “She was a small lady. I tried to dog her. But she wasn’t having it. She looked up at me and said, ‘Beneath your thuggish ways, Son, I see a champion.’ When she said that, I started crying like a baby. She saw what I’d been hiding all those years.”

“She had high energy and was the most consistent person I had ever met.”

Stanley’s message to teachers and administrators is, “You do make a difference in children’s lives.” He credits Simmons with helping him turn his life of tragedy and violence into a message of inspiration and hope.

“I can honestly say, if it were not for Monda Simmons, I would be in jail or dead.” Stanley says he asked Mrs. Simmons to give him a list of things he needed to do in order to have a life like hers. “She gave me a list of a few simple things I needed to do, come to class early, sit in the front row, ask three questions during every class, and go to tutoring,” were all simple things on her to do list. Stanley also took to the gridiron his senior year as a DB/CB, “I wasn’t big, but I was fast.”

Reflecting on a time when he was young and lived in a car for three months, Stanley acknowledged, “my life is transformed but it all started with a teacher… a teacher who saw something in me.” Although, Mrs. Simmons told Stanley, “My job wasn’t to save you, my job was to give you an opportunity to save yourself.”

Stanley was the spokesperson for the US Navy’s ‘Accelerate Your Life’ campaign, has spoke before the Super Bowl, has delivered keynote speeches hundreds of times, has written a book, “There’s No Place like Hope,” and now will bring his powerful message to the students and faculty of Chattooga High School.

“Jeff is innovative and I appreciate what he does for his students,” Stanley said.