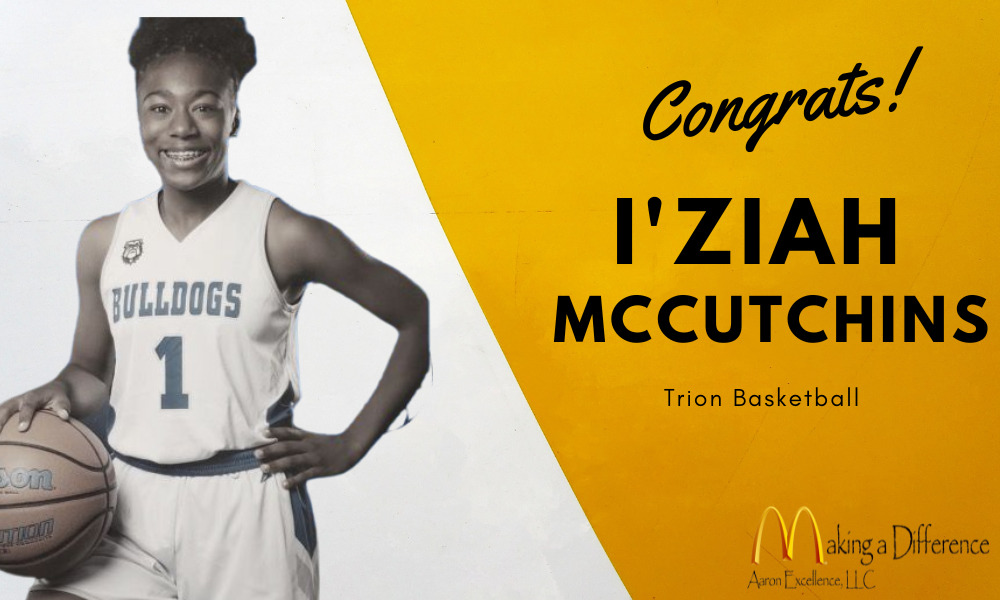 McCutchins helped the Lady Bulldogs clinch the Gordon Lee Christmas Tournament Championship. She averaged 21 points per game, and scored 27 points against rival Gordon Lee. She was 8-17 (47.1%) in three points and 47.9% from the floor. Defensively she had five rebounds, 4.3 deflections, 3.7 steals, 5.3 assists per game, and only 2.3 turnovers per game in the tournament.

“I feel like we played some of our best basketball yet in the Gordon Lee Christmas Tournament this year,” Trion Head Basketball Coach Garrett Brown said. “We averaged 59.3 points per game and held our opponents to 41 per game. Shooting percentage for the tournament was 39.8% and 34.4% from 3 point range. Ransley Lawrence averaged 8.3 points per game and 6 rebounds per game as well. Aubree Weaver averaged 8 points per game for the tournament as well. During the championship game (against Silverdale), we got down early in the contest 13-0 and Anna Grace Brown sparked us off the bench scoring three 3-pointers in the quarter to keep us in the game. It was 18-9 at the end of the first quarter and we out scored them the rest of the way to win. It was definitely a fun tournament for the girls.”

McCutchins is the point guard for the Lady Bulldogs. She is a 16-year old junior. She has been playing basketball since she was 6 years old. In addition to high school basketball she plays AAU basketball for Wood Elite 2024, “I have been playing AAU for about three years,  AAU has definitely helped me improve my game a lot,” McCutchins said. She also plays softball for Trion High School. She is a slap hitter and plays shortstop.

“I’Ziah is the real deal as a player and a teammate. As a player, her skills are as good as coach could ever want. She’s the total package as a point guard,” Coach Brown said. “She has excellent dribbling skill and her vision of the court is elite as well. She is averaging 16.4 points per game and is without a doubt our best scoring threat. Defensively, she may be the best defenders in North Georgia, and it’s something she really takes pride in.”

“She’s averaging 6 deflections and 6.7 steals per game this season so far, so I wouldn’t want her to be guarding me,’ Brown said.

“As a teammate, she elevates everyone else’s game on the court and is very unselfish. The girls know that she is the real deal and definitely know she’s got their back because of how much work she puts in. She wants us to succeed.”