Player of the Week: Garrett Mahan

This week’s AllOnGeorgia Player of the Week honors brought to you by Jim Aaron’s Summerville McDonalds go to Trion Football’s Garrett Mahan. 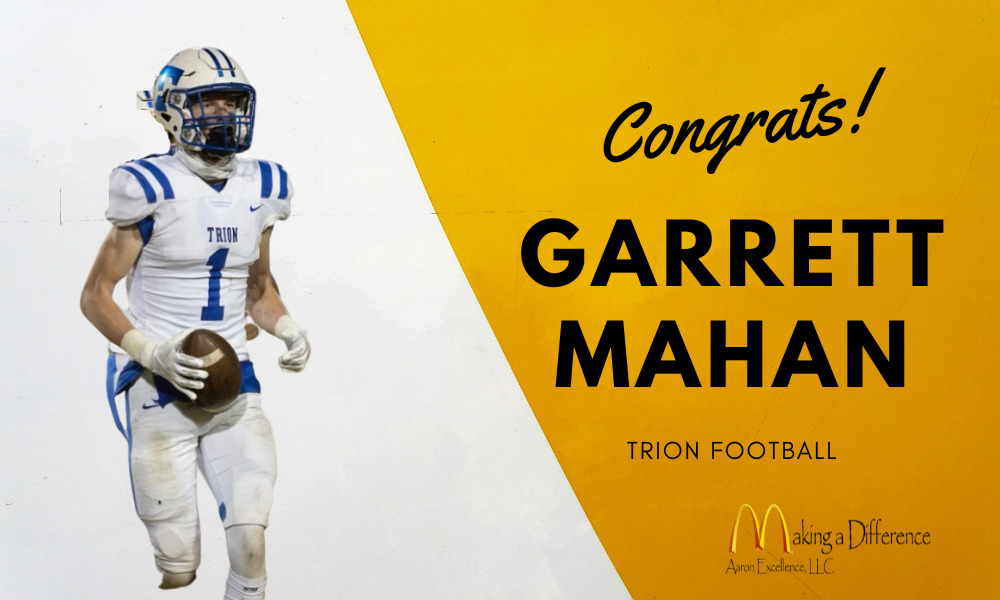 This week’s AllOnGeorgia Player of the Week honors brought to you by Jim Aaron’s Summerville McDonalds go to Trion Football’s Garrett Mahan.

“I am so proud of Garrett,” Trion Football Coach Sean Patrick said. “He had a great game last Thursday night against Armuchee, which included several catches, one touchdown, several tackles, and an interception. Garrett has worked so hard, and it has been fun watching him excel this season.” 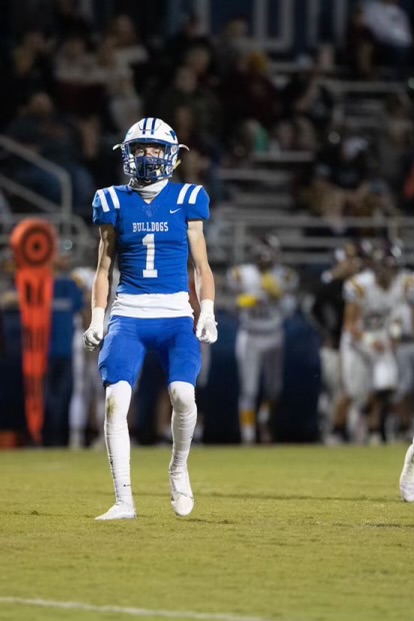 Here is a little bit more about our Player of the Week:

AOG: Tell us your name, age, grade, and position

AOG: How many years have you been playing football?

AOG: Do you play any other sports?

Mahan: This year I will be playing basketball for the first time.

AOG: Do you have a favorite football team?

Mahan: My favorite football team is the Georgia Bulldogs.

AOG: Who is your role model and why?

Mahan: My role model is my Dad because he’s always pushed me to be my best mentally and physically. No matter how hard things get, he’s never given up on work, family, and most importantly God.

AOG: Finish this sentence “In ten years I will be…..”

Mahan: In ten years I hope to be working as a carpenter.

AOG: Do you have any special talents or hobbies? What is something most people do not know about you?

Mahan: I love hunting and fishing, and playing the guitar, my favorite song to play is By Your Grace by Cody Johnson.

AOG: What is the most important thing you’ve learned from your coach?

Mahan: The most important thing my coach has taught me is how to play selfless and put my teammates before myself.

AOG: What’s your most memorable moment in football?

Mahan: My most memorable moment in football is when I scored my first touchdown. 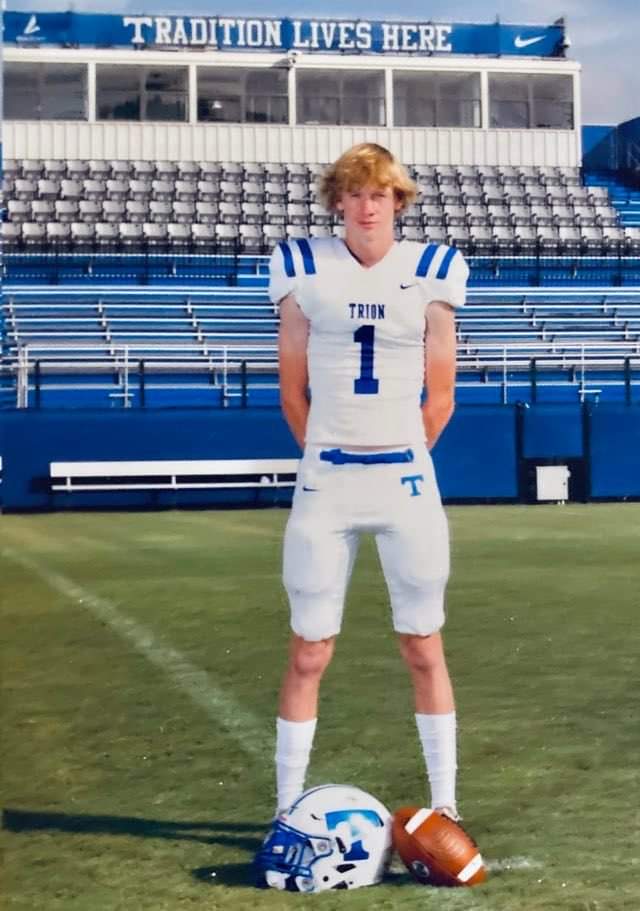 AOG: What are your goals, as a team and personal?

Mahan: Our team goal is to win a region championship, and a state championship. My personal goals are to score, and lead the region in interceptions and punting average.

AOG: How do you mentally prep for a game? (pre-game routine)

Mahan: My pregame routine is to listen to music and close my eyes and relax.

AOG: What is the best thing about your teammates?

Mahan: The best thing about my teammates is that no one is selfish.

Mahan: My favorite class is Carpentry with my favorite teacher Coach Stamey. 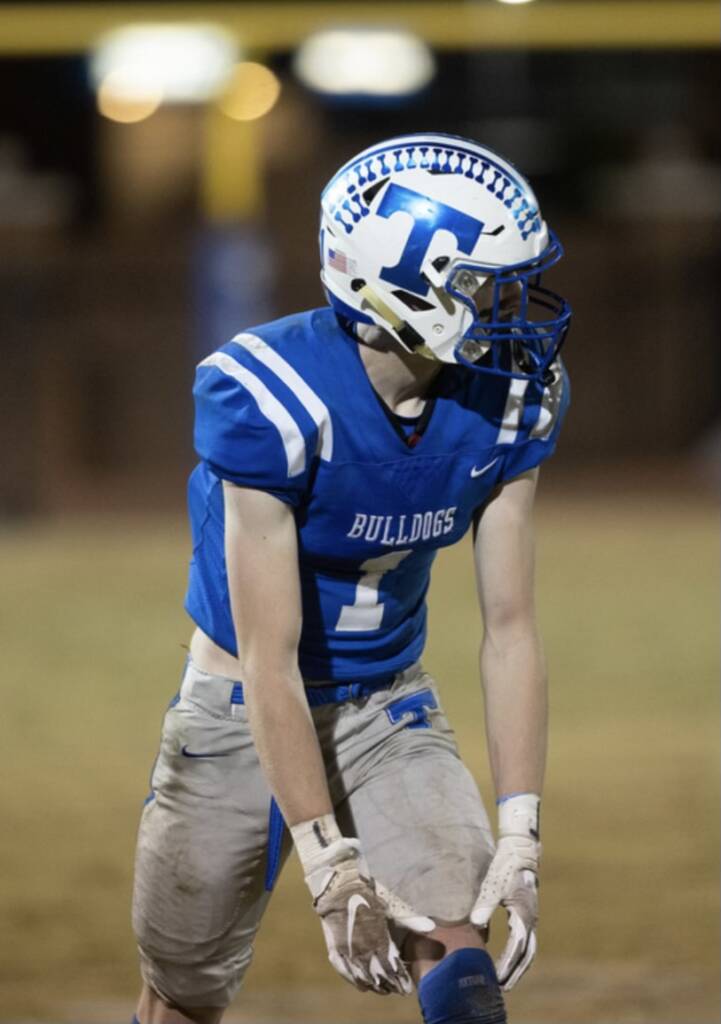 AOG: What is your GPA?

Mahan: My parents names are Jeff Mahan and Renee Mahan.

AOG: What is the best advice you’ve ever received?

Mahan: The best advice I have ever received has been to humble yourself and God will lift you up in due time.

AOG: What is your favorite food?

Mahan: My favorite food is any Mexican food.

AOG: If you were given a billboard that everyone could see, what would you put on it?

Mahan: If I had a billboard, I would put daily quotes for young and older Christian athletes.

Next up for Mahan and the Bulldogs will be the Region Championship game against the Darlington Tigers.

Coach Patrick said the team has had a good week of practice. “The kids are excited and know what is at stake,” Patrick said. “Anytime you’re competing for a championship it’s a big deal. As a program, we have not won a region title since 2003, so this game is a big for us. With that being said, we’ve treated this week of preparation like any other week. Again, we’re excited about this opportunity.”

Mahan had this to say about the upcoming game: “The Darlington game is huge. It is the first region championship I have played in and I want the seniors to always have the memory of winning a region championship. It’s also big because it could lock up two home playoff games. It has been a great week of practice and preparing, and it’s safe to say we’re ready.”