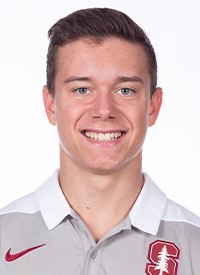 Stanford freshman Brody Malone brought home his first collegiate event title with a score of 14.550, a career-best for him and the Cardinal’s highest individual score this season in the vault event a the Stanford Open Saturday night in the home-opener from Burnham Pavilion. Stanford won the event with a score of 406.300, Cal followed in second at 395.750, with NorCal United in third (284.400).

Malone is a 2018 graduate of Trion High School.  Malone was a member of a two-time Georgia state championship team. He competed for Cartersville Twisters Gymnastics club team (2014-18) and was a member of the two-time Georgia state championship team (2017-18). In 2017 Malone was a titlist at the P&G National Championships (three-time international high bar silver medalist) and as a member of the National team his competition includes: Japan Junior International Cup, Calgary Invitational (Canada), Ricky Deci Invitational (Houston, Texas).

Up next for Stanford Gymnastics: Having already topped Cal twice in as many weeks to start the year, Stanford will once again travel to Berkeley, Calif. next week to face the Golden Bears on Sunday at 6 p.m.