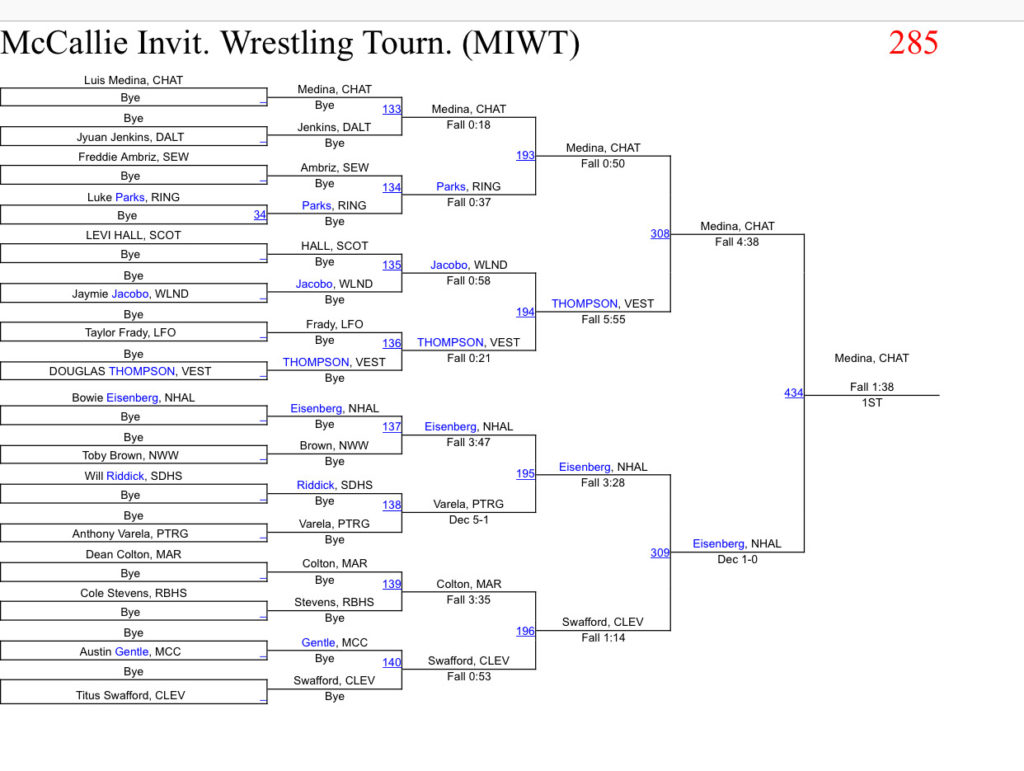 The Chattooga Indians headed into the annual McCallie Invitational wrestling tournament with an impressive three Top Seeded wrestlers. Defending two-time State Champ Griffin Jarrett (113) made it into the finals in the tournament many experts have long considered to be the toughest in the Tri-State area. Jarrett picked up a pin along the way and earned 22 team points before falling to Signal Mountain’s Daniel Uhorchuk.
At 220 lbs, junior Alex Mears picked up two Falls and a Tech Fall en route to his Finals match where he came up just short to Cleveland High School’s Wilson Benefield. Mears scored 25.5 team points while taking 2nd Place.
Chattooga Heavy Weight Luis Medina is getting into prime wrestling form after two rounds of playoff games in football and entered McCallie with his first Top Seed. Medina didn’t disappoint Indian fans as he put on a display of domination at McCallie. Medina pinned all opponents in the 285 lbs weight class, including a 1st period Fall in the Championship bout where he defeated North Hall’s Bowie Eisenberg to win his first McCallie Championship.

Medina picked up a staggering 34 team points as he led the Indians to a respectable 8th Place overall finish out of 26 of the best wrestling teams from Georgia and Tennessee. Chattooga was the only Class AA school finishing in the Top 20. Medina is the first wrestler to deliver a McCallie win for Coach Brian Beasley.
Sophomore Ty Veatch (195 lbs) surprised many fans with his 4th Place finish. Veatch went 4-2 at the tournament with two Falls and, after suffering a pin at the hands of Cleveland High School’s Isaiah Perez, Veatch battled back in the consolation rounds to face Perez again in the Conso-Finals. This time Veatch took Perez the distance before falling 2-7 for the 4th Place finish. Veatch scored 21 team points and could be a serious threat at the AA State Tournament.
Other Indians scoring team points included Jason Malone (145) and Jakoby Cottrell (182).
“We go to McCallie each year for the level of competition. The field is loaded with state champs. It’s good to be battle tested before February,” Coach Beasley said.