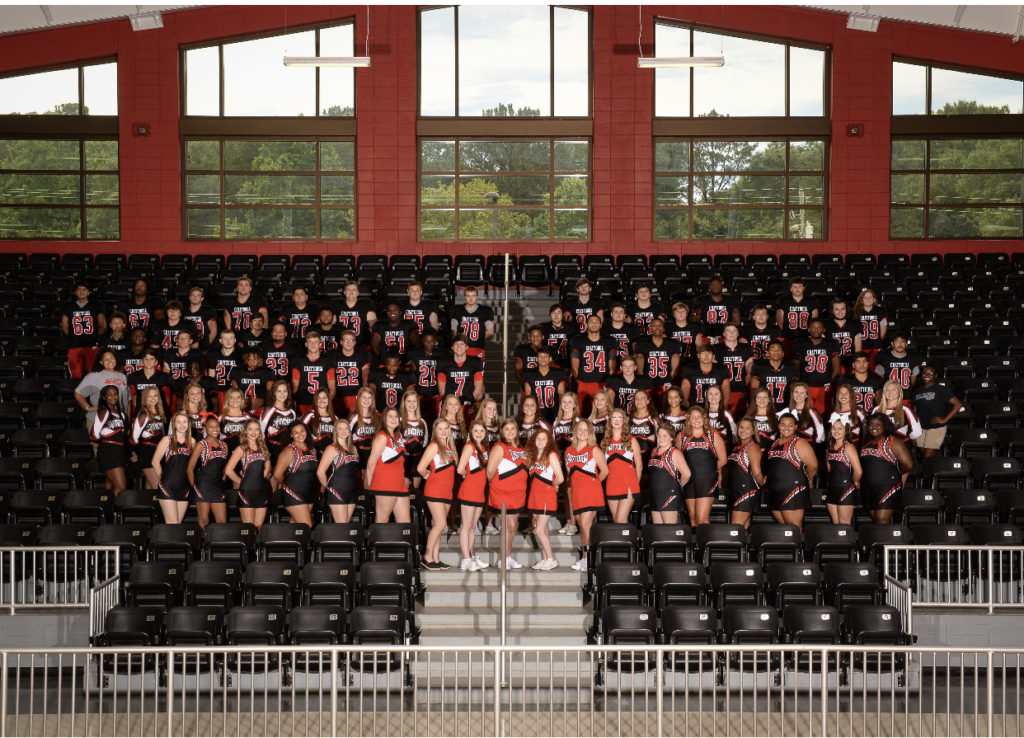 With the first quarter of the 2019 season under their belts, the Chattooga Indians (1-2) hosted the Coosa Eagles (0-3) on Buddy Windle Field at the Little Big Horn. Head Coach Charles Hammon had three tough opening games for his squad and felt they played 9 of the 12 quarters very well. Mistakes and injuries put the Indians in a tough position, as well as a serious lack of depth with returning starters, and made the first three games a search for identity.

Friday’s game against the struggling Eagles couldn’t have been better orchestrated. Chattooga’s first year starting quarterback, junior Cash Allen lofted three TD passes, including two to senior receiver Jamarious Mosteller. Mosteller added a rushing TD for a total of three scores, while sophomore tailback LaShaun Lester picked up two more rushing Touchdowns and took a screen pass 28 yards for a receiving TD to give him three scores as well. The final score was 41-7. 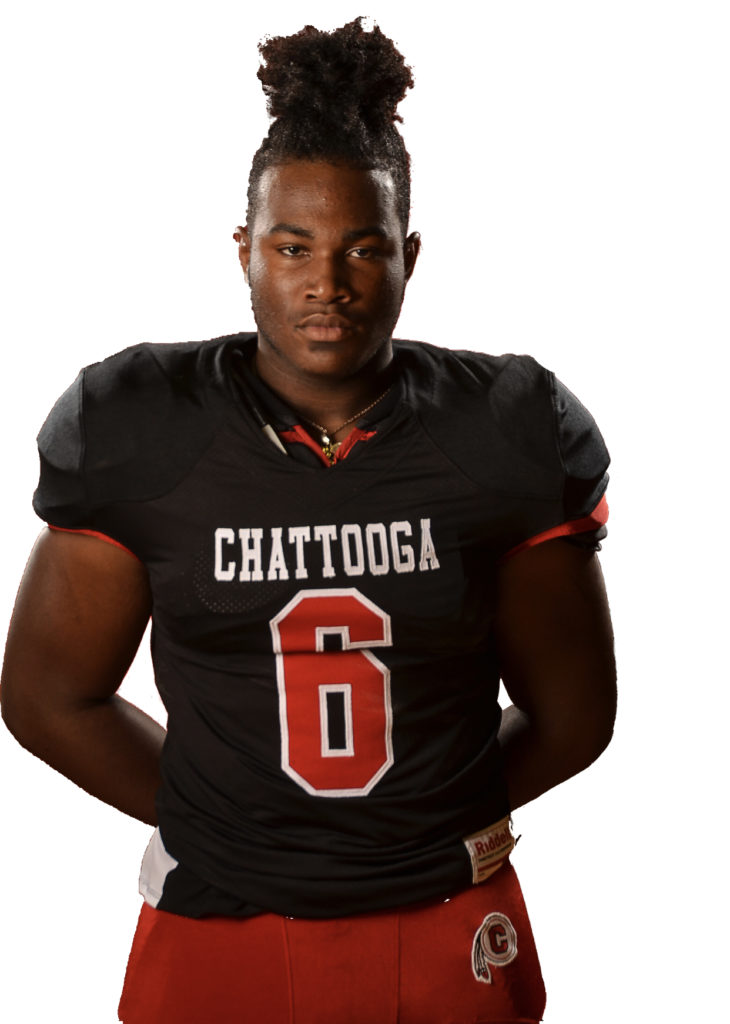 And while the trifecta from this trio kept the Indians offense rolling, it was a dynamic duo of sophomores on defense that kept the Eagles offensive efforts stalling and coming up short. Cole Cavin #7 picked off Coosa’s Brevan Knight twice in the opening half, with each pick setting up scores for the Indians. Cavin leads the team in interceptions with three in the first four games and is currently tied for 4th in the state in INTs. The 6’5” 195 lb sophomore safety effectively shut down the passing lane between the hash marks and opened up an onslaught of turnovers for Coosa including five total interceptions on the night.
Not to be outdone, Rowan Burdick #22 got in on the action with a touchdown saving interception in the second quarter to keep Coosa out of the endzone and added another in the third quarter when he picked off a 40 yard pass from Knight and returned it over 60 yards. A penalty left Burdick with 44 yards on the return and set up another Indian score. The sophomore cornerback added 5 tackles including a special teams tackle on a kickoff that pinned that Eagles at their own 12 yard line.

Burdick and Cavin combined for 7 tackles and four interceptions.

Junior, Ty Veatch added another interception as the Indian defense was nearly perfect on the night.

Chattooga opened up the game kicking off to the Eagles and, facing 3rd and 10, Knight completed a short pass to the flats where Burdick’s open field tackle left Coosa facing a punt situation with 4th and 3. A bad punt set the Indians up with great field position to start their opening drive nearly at midfield. LaShaun Lester’s second carry of the night went straight up the middle for a 47-yard touchdown and Luis Medina’s PAT made it 7-0 for the Indians.

On the Eagle’s ensuing possession, Cole Cavin picked off a pass over the middle and returned it to the Coosa 20 yard line. A penalty again backed the return up to the Coosa 35 where Cash Allen delivered a perfect strike to Mosteller on Chattooga’s first play of the drive. With only three offensive plays, the Indian offense was up 14-0.

Brevan Knight tried to get something moving on the Eagle’s next drive but, after two runs netted just four yards, Knight again went back to air attempting just his second pass of the 1st quarter and again Cole Cavin was there to intercept the pass at the Indian 30 yard line. Lester’s first play was a 45 run across midfield, followed by a 17 yard pass from Allen to Mosteller. The promising drive worked all the way down to the Eagle 10 yard line before a bobbled snap led to a turnover for the Indians. A troubling trend that continued throughout the night for Chattooga.

Knight commenced the most successful drive for the Eagles all night with a 73 yard drive which consumed the remainder of the 1st quarter and culminated in a 3rd and 6 play from the Indian 17 yard line as Knight lobbed a pass into the front corner of the endzone where Rowan Burdick made a leaping interception to steal 6 from the Eagles. Unfortunately for the Indians, a fumble by Lester gave Coosa the ball back after just two plays at the Indian 20 yard line. The Indian defense couldn’t prevent the Knight to Curry option play for a 9-yard score putting the Eagles on the board with a score of 14-7.

For the Eagles, this would be the closest they came to endzone for the rest of the night as the Indian defense closed ranks and kept Coosa behind the chains for the entire 2nd half.

The first half ended only after a screen pass from Allen to Lester went 42 yards for a 20-7 Indian lead following a missed PAT.

2nd Half- More of the Same
The Indians started the 2nd half with the ball and a long drive capped with an 8-yard TD scamper by Lester and a successful two-point conversion in the form of a pass again from Allen to Mosteller pushing their to 28-7.
Late in the 3rd, the Indians were forced to punt but a booming 45-yard punt from Cash Allen left the Eagles trying to work from their own 15 and were held a 3-and-out. Allen led the Indians right back down the field and dump a short shovel pass to Mosteller who took it 26 yards to the endzone for 35-7 lead.
Ty Veatch stole the next Knight pass with his first pick of the season only to see a Cash Allen fumble turn the ball right back over to the Eagles on Chattooga’s first play after the turnover.
The quarter ended with multiple personal foul penalties advancing the Eagles out near midfield but the 4th quarter started poorly for Coosa as Rowan Burdick picked off a deep pass from Knight and returned it all the way back into Eagle territory.
The Indians rotated some bodies on their ensuing drive to get a look at Mosteller in the shotgun and he did not disappoint, wrapping up the drive with a 19-yard keeper for the final score of the night. 41-7 following another missed PAT.
Chattooga was able to play a lot of JV players for the remainder of the game and had good production from Jamies Esman #18, as a scrambling QB, and Deon Kelly who quietly put up 60 yards rushing on just 8 carries.
Behind the Numbers
Stat leaders included:
Rushing–
Lashaun Lester- 19 carries for 163 yards and 2 TDs
Passing–
Cash Allen- 4 of 7 for 114 yards and 3 TDs.
Receiving–
Jamarious Mosteller- 3 catches for 73 yards and 2 TD’s.
Defense–
Jakoby Cottrell- 7 tackles, 1 TFL
Cole Cavin- 2 tackles, 2 int
Rowan Burdick- 5 tackles, 2 int
The Indians rolled up 364 yards of offense with 250 on the ground and 114 through the air.
Lester’s 8.6 yards per carry included the longest rush of the night on his 47 yard score on the second play of the game for the Indians. His 615 yards rushing on the season has him at #11 in the state and his 7 TD’s are tied for 30th in the State.
Mosteller now has 11 catches for 236 yards and 4 TD’s on the season.
Jakoby Cottrell’s 40 tackles has him in the Top 50 in the state.
Cole Cavin currently sits tied for 4th in the state with 3 total interceptions.
Cash Allen is over the .500 mark going 22 of 43 passing with 351 yards, 5 TDs and just 2 ints.
This Friday the Indians will travel to Gordon Central to take on the Warriors, AllOnGeorgia will be streaming the game.