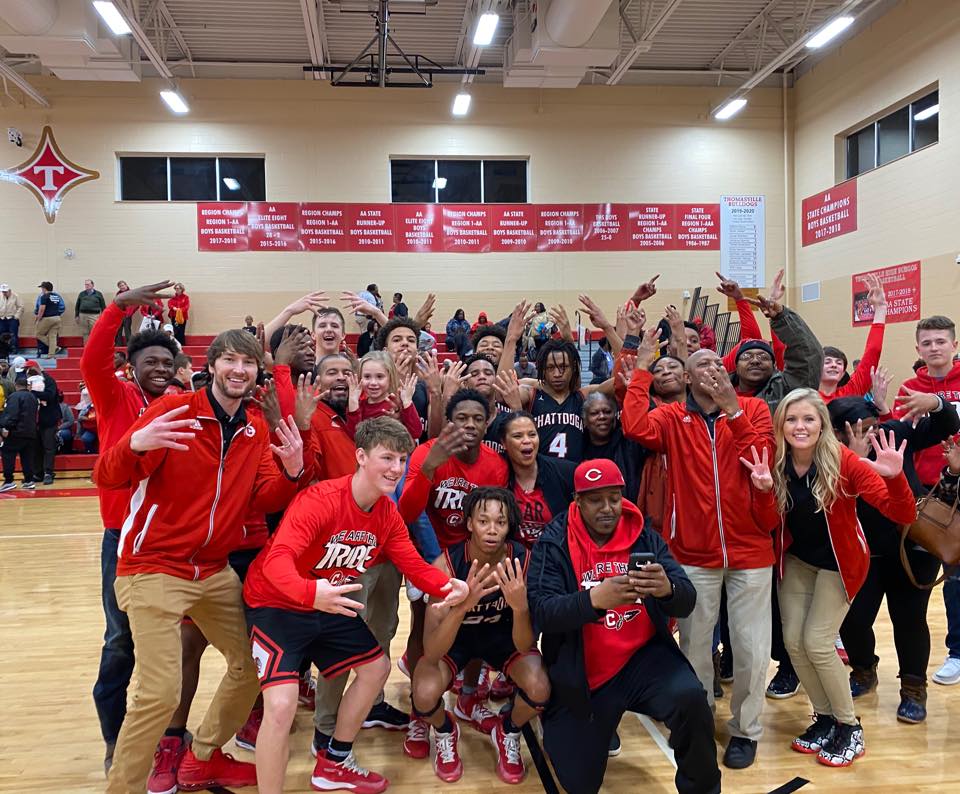 The Indians Basketball defeated Thomasville 66-60 in the Sweet 16 round of the GHSA tournament to advance.

AllOnGeorgia caught up with Indian Head Coach to talk about the Sweet 16 game and the upcoming Elite Eight game.

“The environment at Thomasville was definitely hostile, but it honestly wasn’t as hostile as we anticipated as we were kind of expecting the worst based on this game being somewhat of a revenge game for them. We learned quickly that our boys would not be able to hear us call plays from the sideline in the first half as we were on offense on the opposite end from the bench on a longer 94-foot court. The boys were somewhat frustrated by this for the first couple possessions, but it really wasn’t a big factor in our lack of production offensively in the first half. I thought our shot selection could have been a little better in the first half. Thomasville’s best player hit a few 30-foot three pointers, and they had a couple of other guys knock down some big threes for them in the first half. We let the energy in the gym get to us a little bit as we tried to answer their made shots. We settled for some tough shots when we could have found better shots, and we missed some shots we should have made. None of our problems were due to a lack of effort. In fact, we had several huge effort plays in the first half that really kept us in the game and ultimately allowed us the opportunity to win the game. Multiple times in the first half, Thomasville looked like they had a breakaway layup in the bag and we had different guys step up and absolutely bust it down the court to keep Thomasville from scoring easy baskets. We ended up scoring a layup as time expired to put us down by 9 at halftime.”

Coach Groce says going into the locker room at halftime he wasn’t thinking that effort was a problem at all in the first half, “maybe nerves had been a factor, I kept calm at halftime and tried to build confidence through focusing on the positives. Based on what I saw defensively from Thomasville in the first half, I thought their biggest weakness within their defense was in “helping the helper” on drives. I felt like we had multiple opportunities to get Cash Allen the ball under the goal on drives. We knew we had to stay aggressive with our guards looking to make plays off of drives. I told the boys that I 100% thought we had Thomasville right where we wanted them. I praised them for their efforts in making hustle plays to keep us in the game. We talked about adjustments we needed to make on defense to keep Thomasville’s best player from hurting us as much. I told the boys we knew exactly what we needed to do as a team to come out and make a run. I told them we were going to be getting the easier shots if they’d look to attack these weaknesses in Thomasville’s defense. I told them that it’s sometimes more difficult to be the team with the small lead because the pressure was on Thomasville now to try to hold their lead while we came out in attack mode.”

An attack mode it was, in the 3rd quarter Chattooga allowed Thomasville to only score 4 points, while the Indians put up 15 in the quarter to take the lead.

“There’s not many better feelings in the world than looking out on a basketball court at a group of friends that have played together their whole lives as they collectively decide that they are determined to do whatever it takes to achieve a common goal together. That’s what we saw in the third quarter. We witnessed a family, led by three seniors, come together, believe in each other, and when their backs were against the wall, they fought as hard as they could to keep their season alive. They simply locked in on both ends of the court,” Groce said.

Heading into the fourth quarter Chattooga was up 38-36.

“In the last few minutes, they sped us up and I thought we had some good looks at the basket on some layups that I was okay with our guys taking. We missed some shots we just shouldn’t have missed. Everyone thinks it’s as simple as holding the ball. I’ve been in this situation before. I think you stay in attack mode.

The 3-point shot heard all the way in Summerville. Many of the Tribe could not make the five hour trek to Thomasville to cheer on the Indians, but fans were able to watch the NFHS stream of the game. With under two minutes to go Damien Smith, “Head” made a 3-point shot extending Chattooga’s lead to 57-63. “Head’s three-pointer was tough. However, he is 57.3% on 3-pointers for 2020 alone, so it’s a shot we will take and live with. It proved to be the dagger. It was a huge shot and we couldn’t be prouder of him,” Groce said.

End of the game: Chattooga 66 Thomasville 60

“After the game, we just got turned up in the locker room. We just told them to soak it all in because they’d never forget this game and this moment. We told them we prayed to the Lord to allow them to play to the best of their ability, and that we personally had to thank Him for being with all of us. We told them we love them and are so proud of them. But we mainly told them that we aren’t satisfied and we have to stay hungry.”

“We know we have our hands full once again with Banks County. I watched them in person last season in the first round of the playoffs as we scouted the game to prepare for the winner. We saw the coach’s son, who’s now a senior this year, score 55 points against Callaway. He’s 6’6” and can score from anywhere. They also have a guard that made over 100 three-pointers last season. They’re a very good offensive team. I’m excited about our chances, though, and I’ll never count my boys out. We aren’t done. We are still hungry.”

On Wednesday Chattooga Basketball will be looking to make history as the first team to advance to the Final Four.