Jeff Martin: the Heartbeat of the Tribe 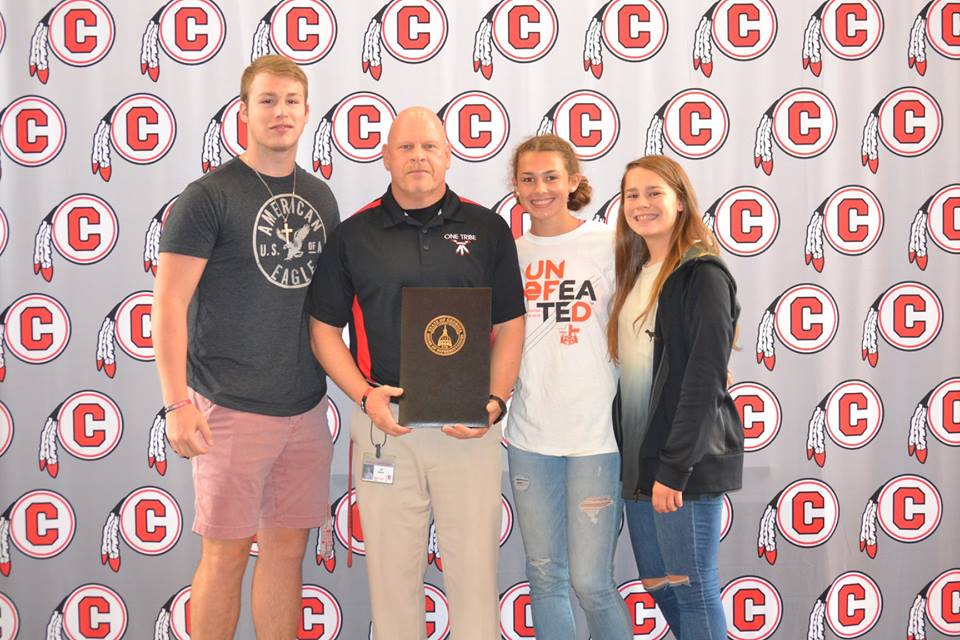 TIMES, THEY ARE A CHANGING

In Chattooga County, things haven’t always been great, by most people’s standards. There have been times when things were good, and periods of time when they weren’t so good. While a debate may linger among the old timers as to when those periods were, or how long they lasted, these days there seems to be a strong consensus about one thing… the current principal of Chattooga High School has devoted his life to bringing about a massive change in the culture in his hallways.

According to Jeff Martin, there is no better way to impact a town, than by bringing hope and passion to the youth who live there. He has made it his mission to change the perception of Chattooga High School students, by first changing their perception of themselves. And for Jeff Martin, that means leading by example and granting his students with the gift of vision – a vision of success for themselves and their school.

To say Jeff Martin is dedicated to bringing his mission to life is a vast understatement. In the nine years of his tenure at the helm of CHS, Martin has missed only two days of work.  Those two days… were when his Daddy passed away. This past Friday, the staff and faculty of Chattooga High had a little surprise in store for Mr. Martin and they needn’t worry about him being present on the big day. With the entire student body gathered in the sparkling new gym, State Representative Eddie Lumsden was on hand to read a resolution authorized by State Senator Jeff Mullis. The Resolution Presentation Ceremony may have caught Mr. Martin off guard, but everyone in attendance knew that the recognition was well-deserved and long overdue.

The Resolution recognized and commended Martin for his outstanding service to the citizens of Chattooga County and for his significant contributions to the lives of so many students throughout the years.

Among the hills and valleys of Chattooga County, there may not be another person who has impacted as many lives as Jeff Martin. While most principals deal with a wide assortment of issues that would keep a Fortune 500 CEO busy, principals from rural areas battle with poverty and a host of social issues that are unique to their culture. Many students entering his doors would likely not have graduated had Mr. Martin not been there to believe in them and reassure them that they could do it. Those difficult journeys have often been the most rewarding… to the students themselves as well as Martin. The passion still burns deep in his voice when Martin says the best part of his job is, “seeing kids that come into high school, and they don’t think they are going to make it four years… and then they walk up on graduation night with tears in their eyes.”

There are many differences in the way Mr. Martin leads his tribe, but the most palpable difference is Jeff’s heart. He is always eager to tell his students that he loves them. Not in a round about manner, but with straight forward pride and respect. His actions leave no doubt about the weight of his words. “They need to hear it, they might not hear anyone say I love you,” Martin said. The students of Chattooga High School all know, without a doubt, that he means it.   His current and former students call him different names; Coach, Mr. Martin, Jeff, but all of them will eventually call him their friend. Jeff Martin, the principal, doesn’t care if a student is rich or poor, black or white, a girl or boy, smart or challenged, an athlete or a band student, popular or a loner, a good test-taker or one that dings on the score report, he simply loves them. “I am not perfect, but I try to be as Christ-like as I can be in my physical body,” Martin said.

For Martin, his students are all a work in progress with unlimited potential. For most of them, the roadblocks that exist in their academic path mostly come from their environment. “Kids are a blank slate… they have it in them. It’s grown ups that take it out of them,” Martin explains. And, for the principal with a heart, the worst part of his job “…is when a kid just gives up.” No matter the reason, in the eyes of Mr. Martin, his biggest fear is a student, “… who has no hope. The loss of hope in a 14 or 15 year-old kid rips my heart out.” When he says these words, there is little doubt that his pain is real.

Martin himself is a product of Chattooga, graduating from Chattooga High School in 1988, Martin describes the education profession choosing him after a year of selling furniture for local merchant, and current Trion Mayor, Larry Stansell. “You can look at it two ways, I was either really good at it or I was really bad at it, because I sold a stereo receiver as a VCR… the guy bought it and then brought it back and asked ‘where does the tape go?'” After that experience, Jeff decided a career change may be in order so he turned his focus from making money, to following his heart. For the past 24 years, that heart has brought his hometown the kind of educator that every principal searches for… someone who cares.

Over the quarter century of his career in education, Mr. Martin has done a little bit of everything. Beginning his career as a paraprofessional, Martin worked in the classroom, on the football field, basketball court, and baseball diamond. He understands the routines, the struggles and challenges that teachers and coaches go through. And most importantly, he knows what their victories feel like. Reminding his teachers of the reasons they chose to become a part of the education process and impact the lives of children is a major part of his core mission and, out of all the classes he taught over his career, Martin says Psychology was his favorite.

Those teachers lucky enough to work with a leader like Martin respect and admire his passion and devotion. According to 2017 Teacher Of the Year, Shane Tucker, “Jeff Martin is an educator who truly cares about the students (and the families) of Chattooga County. To me he has been a mentor, a role model, and a lifelong friend. His dedication to Chattooga High School is unparalleled. He is a huge part of the turnaround the school has seen in the past 8-10 years. As a principal, he is respected by the faculty, staff, students and anyone else he comes in contact with. It has been my privilege to work with him as co-teacher, serve on the same coaching staff, and to now work under him as an educational leader.”

When asked about the figures that shaped his leadership style, Martin didn’t hesitate. David Jones, Melvin Mosley and Jimmy Dean… “I was very fortunate to be around those guys every day. They knew, not only education, they knew how to treat people. If you could take all three of those, and have that kind of character and class, that would be my role model. I liked the way they carried themselves.”

The instruction of these three men left Martin with a lasting impression, if you treat people right and you do the right thing, it will always work out.

Stephen Smith, a long-time friend of Martin’s, has known Jeff for 42 years. “I can’t begin to express the sense of pride I feel to see what Jeff has done for this community. I never dreamed he would become the Principal of Chattooga High. But, it is glaringly obvious it is where he belongs. His heart desires nothing but the best for the students…and it is genuine….having nothing to do with scores, rates, or political outcomes. I believe nothing makes him happier than him seeing one of his students excel and succeed,” Smith said.

Martin doesn’t put much thought into his own legacy. He remains humble despite overwhelming successes the school and students have already achieved. On top of a new building, athletic facilities and spike in school pride, Martin has led a surge in graduation rates that placed Chattooga High School tops in the county, with a record-breaking 94% graduation rate. Martin claims no credit for himself, quickly pointing to his staff and the students themselves for these victories. Regarding his own mark on the school and community, Martin would only say, “…when people walk by my casket I want them to say, ‘that guy right there really cared about me, about this community.'” The students here at Chattooga couldn’t agree more.

Before walking out of his office, Martin leaned back and smiled his signature Jeff Martin smile. His voice cracked slightly when he spoke, “I started to think… I would like to tell my Dad about today, but I know he already knows.”