Chattooga High School Alumna Meagan Perry was selected to deliver a speech during the University of Georgia’s recent graduation ceremony. 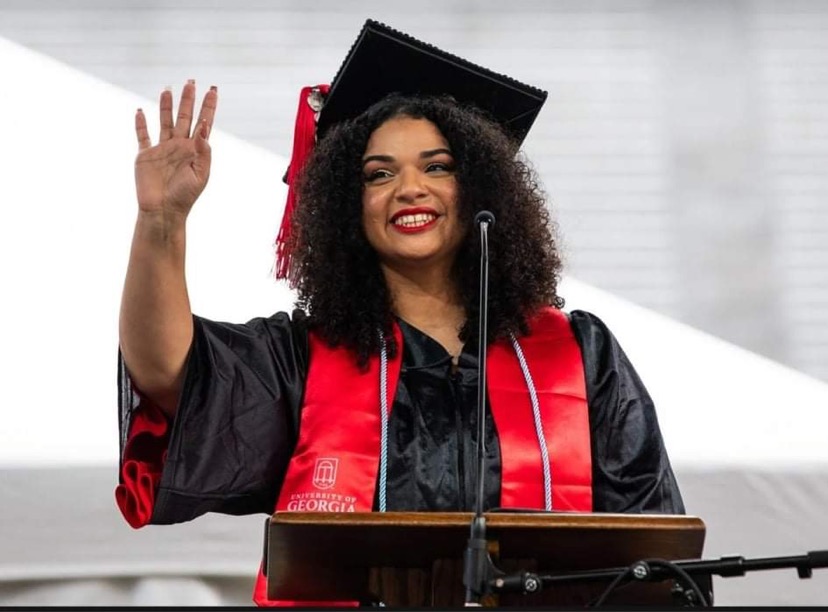 Chattooga High School Alumna Meagan Perry was selected to deliver a speech during the University of Georgia’s recent graduation ceremony.

Speaker selection consisted of  an application process followed by an interview where Perry was asked to deliver her speech.

“I’m not sure how many applied initially but I was one out of six that got an interview. After that I practiced with Dr. Meg Amstutz, Associate Provost for Academic Programs and Chief of Staff, to perfect the speech. It was a very exciting experience but I don’t think I realized the weight of the honor I had until I started practicing with Dr. Amstutz. She was telling me my family would get special seats and that I would not only walk out with President Morehead but have lunch with him afterwards as well. That’s when I kind of realized it was a big deal and what it would mean for not just me but my family and supporters back home too,” Perry said.

Back in Summerville, teachers at Chattooga High School live streamed the graduation ceremony and Perry’s speech.

Success and hard work are nothing new for Perry.

As the class president of Chattooga High School and chapter president of her school’s FFA organization, Perry graduated in the top 10% of her class. From competing in regular Future Farmers of America and Georgia 4H competitions to being named one of only 300 Gates scholarship winners in 2018, Perry’s Bulldog spirit has always shown through.

After being accepted into the University of Georgia, Perry’s  ambition and dedication to academic success immediately qualified her for the Dean’s list. She was soon awarded the American FFA degree, the highest degree achievable in the National FFA Organization.

An active member on the UGA campus, Perry has been an actuve member and event coordinator for UGA CHAARG, a health empowerment organization. She sharpened her student leadership skills as a Grady ambassador and as summer staff at the Georgia FFA-FCCLA Center, as well as the moderator for our 2021 40 Under 40 Panel.

Perry’s capstone project is a year-long public relations initiative for the Athens Athletic Hall of Fame. She has enjoyed being connected to Athens, a city she has grown to love, but she is also a global scholar who has studied abroad in Madrid, Paris, and Rio, even acting as a social media coordinator for a local hostel.

”UGA was a great experience for me! Athens is the perfect size between small town and big city and UGA has so many amazing opportunities and connections for students. The faculty and staff are so caring, especially those within Grady College. I went in with a good idea of who I was and who I wanted to be and I feel like I am much much closer to the woman I wanted to be now,” Perry said.

“I participated in UGA’s Double Dawgs program, a 4+1 program that allows students to take graduate level classes during undergraduate years, and I have recently been accepted to UGA’s graduate program full time starting in the Spring. I have also accepted a remote full-time Spring internship with Berlin Rosen, a PR agency based out of NYC. Beyond these endeavors I still have some career exploring to do but I’m excited to do it with the support of my friends and family as well as UGA and Chattooga behind me!”