The Summerville Police Department is aware of a social media post that is being shared and has caused some alarm and has released the following information.  “While we will not be discussing this social media post or its contents, we do want to inform the public that on the evening of December 5th that a sexual assault against a female in her 20’s was reported to have occurred in a heavily wooded area adjacent to the Summerville Housing Authority apartments located at Oak Street and McGinnis Circle.  Additional evidence and details concerning the incident are still being gathered in this on-going investigation.  Currently no description of a suspect is available.

Although there is nothing known at this time to suggest that this is anything beyond an isolated incident, the Summerville Police Department suggests, as always, to remain vigilant and aware of your surroundings.  In addition to maintaining vigilance and situational awareness, especially during the holiday season, anyone who observes suspicious activity is encouraged to contact 911.

During this investigation if any information is developed that may help protect the public, it will be disseminated through the local media outlets.” 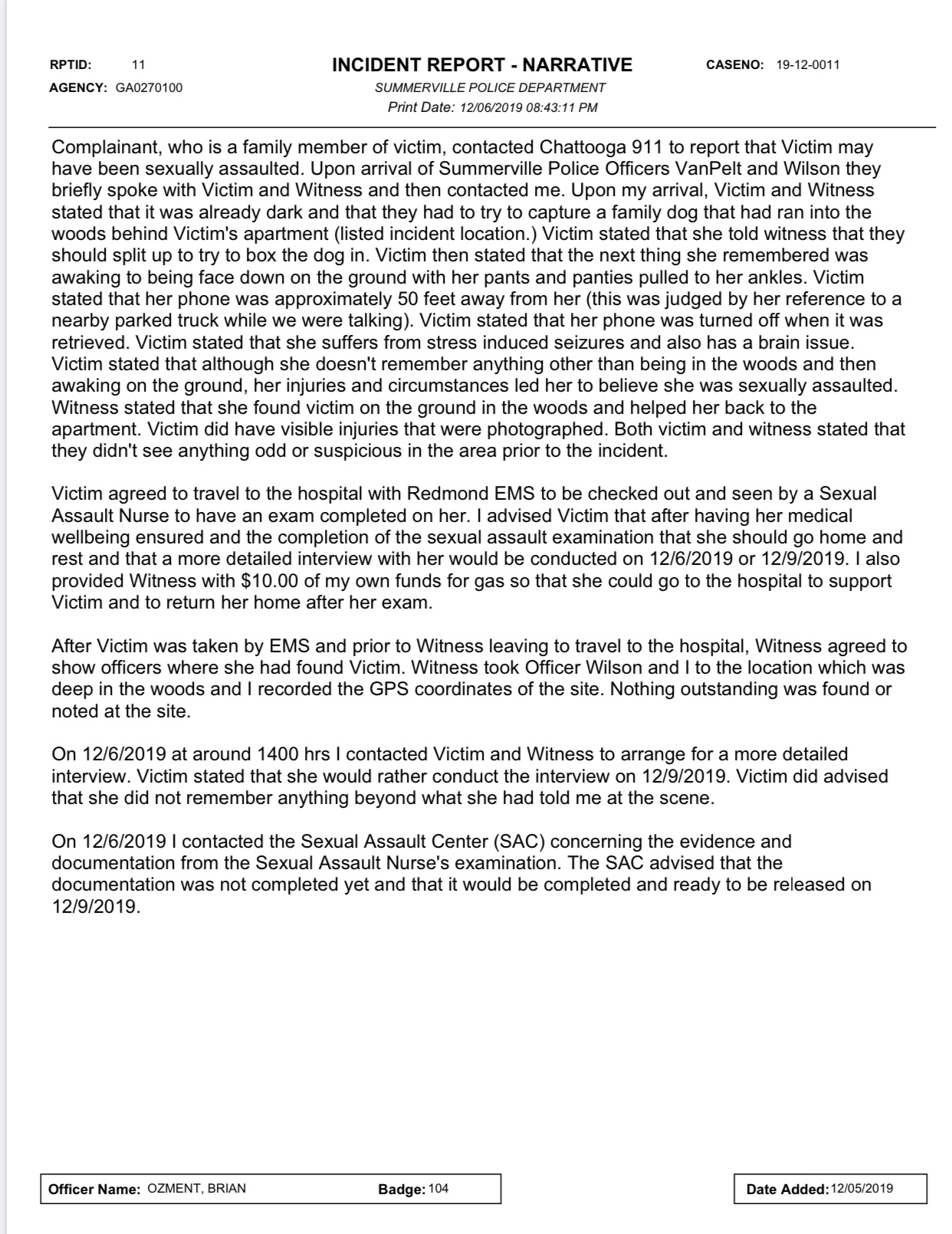 From the incident report:

Complainant, who is a family member of victim, contacted Chattooga 911 to report that Victim may have been sexually assaulted. Upon arrival of Summerville Police Officers VanPelt and Wilson they briefly spoke with Victim and Witness and then contacted me. Upon my arrival, Victim and Witness stated that it was already dark and that they had to try to capture a family dog that had ran into the woods behind Victim’s apartment (listed incident location.) Victim stated that she told witness that they should split up to try to box the dog in. Victim then stated that the next thing she remembered was awaking to being face down on the ground with her pants and panties pulled to her ankles. Victim stated that her phone was approximately 50 feet away from her (this was judged by her reference to a nearby parked truck while we were talking). Victim stated that her phone was turned off when it was retrieved. Victim stated that she suffers from stress induced seizures and also has a brain issue. Victim stated that although she doesn’t remember anything other than being in the woods and then awaking on the ground, her injuries and circumstances led her to believe she was sexually assaulted. Witness stated that she found victim on the ground in the woods and helped her back to the apartment. Victim did have visible injuries that were photographed. Both victim and witness stated that they didn’t see anything odd or suspicious in the area prior to the incident.
Victim agreed to travel to the hospital with Redmond EMS to be checked out and seen by a Sexual Assault Nurse to have an exam completed on her. I advised Victim that after having her medical wellbeing ensured and the completion of the sexual assault examination that she should go home and rest and that a more detailed interview with her would be conducted on 12/6/2019 or 12/9/2019. I also provided Witness with $10.00 of my own funds for gas so that she could go to the hospital to support Victim and to return her home after her exam.
After Victim was taken by EMS and prior to Witness leaving to travel to the hospital, Witness agreed to show officers where she had found Victim. Witness took Officer Wilson and I to the location which was deep in the woods and I recorded the GPS coordinates of the site. Nothing outstanding was found or noted at the site.
On 12/6/2019 at around 1400 hrs I contacted Victim and Witness to arrange for a more detailed interview. Victim stated that she would rather conduct the interview on 12/9/2019. Victim did advised that she did not remember anything beyond what she had told me at the scene.
On 12/6/2019 I contacted the Sexual Assault Center (SAC) concerning the evidence and documentation from the Sexual Assault Nurse’s examination. The SAC advised that the documentation was not completed yet and that it would be completed and ready to be released on 12/9/2019.