Rome will serve as a homecoming site for several members of the U.S. Air Force Thunderbirds this this month. 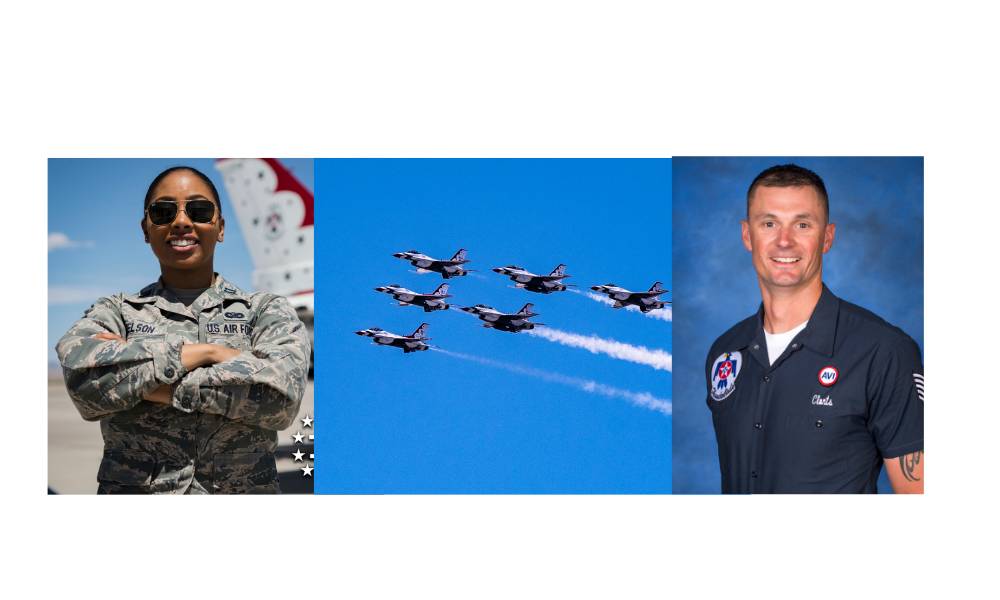 Rome will serve as a homecoming site for several members of the U.S. Air Force Thunderbirds this this month. The Wings Over North Georgia Drive-In Air Show will take place Oct. 24-25 at the Russell Regional Airport.

The event offers Atlanta- and Chattanooga-area residents a rare opportunity to see America’s “Ambassadors in Blue.” Most air shows were forced to cancel during the 2020 season due to the COVID-19 pandemic. After careful coordination with county and state agencies, the decision was made to host the two-day, “tailgate-style” air show in Rome using a drive-in format. This approach offers aviation enthusiasts the chance to see an amazing lineup of performers while maintaining proper social distancing.

For a select group of the Thunderbirds team, the air show in Rome will be in familiar surroundings as they perform for family and friends not far from their hometowns.

Capt. Remoshay Nelson, Thunderbird 12, is from Douglasville, GA and leads the team’s marketing, publicity, and community relations program. Following graduation from Douglas County High School, Nelson received a Bachelor of Arts degree from Howard University and was commissioned as a second lieutenant in the Air Force. Since her commission, Nelson has held numerous public affairs positions across the globe, the most recent appointment as the Thunderbird’s first female African American officer. She recently participated in the “America Strong” flyovers of nine cities, including the Atlanta area, honoring healthcare and frontline workers.

The parents and family of Master Sgt. Thomas “Nathan” Clonts won’t have far to travel to see their son during the 2020 air show. Clonts is a native of Rome, GA and also serves as the Maintenance Production Superintendent for the Thunderbirds. He enlisted in the Air Force after graduating from Armuchee High School in 2001. The return to northwest Georgia during the fall season’s display of brilliant orange, red, and yellow leaves is a significant change from his current surroundings at Nellis Air Force Base, NV.

Tech. Sgt. Antwaun Westerfield is the APG Flight Chief for the Thunderbird’s Aircraft, Powerplant and general aviation section. Atlanta is his hometown. Westerfield enlisted in the U.S. Air Force following graduation from Morrow High School 18 years ago. While serving, he received a Bachelor of Science degree from Columbia University. Westerfield is well-versed in the aircraft avionic systems for F-16s and has spent a majority of his military career working on the elite fighting aircraft.

Staff Sgt. Jimmy Navar hails from Jonesboro, GA and serves as a Fuels System Technician for the team. He graduated from Jonesboro High School in 2014 and enlisted in the U.S. Air Force in 2015. He works inside and outside of fuel tanks to remove, repair, inspect, install, and modify aircraft fuel systems. Navar was stationed at Davis-Monthan Air Base in Arizona prior to joining the team.

Opening ceremonies and flying demonstrations will kick-off each day at about 12:30 p.m. Parking tickets for the Drive-In Air Show are ADVANCE PURCHASE only and will not be sold on show days. Those interested in attending the event should purchase early before tickets are sold out.

Each vehicle will be assigned a 10-by-20-foot space with an adjacent 10-by-20-foot private viewing area for tailgating. Guests are allowed to bring their own chairs, tables, non-alcoholic beverages, and food. Beverages and food also will be available for sale on site. Portable restrooms and wash stations will be placed throughout the venue and will be sanitized hourly. A mask is required when air show attendees leave their parking areas for rest room and concession visits, a mask is required. For a full list of permitted and restricted items and rules, please visit Wings Over North Georgia for more details.