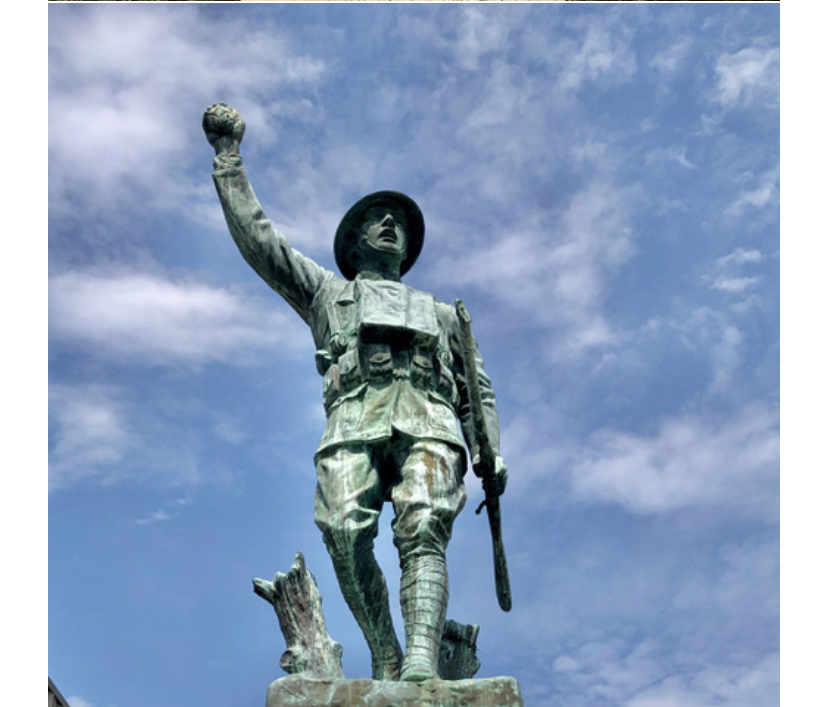 Saturday, May 29th, at 2 pm near the Veterans Memorial in Dowdy Park in Summerville, Georgia, the Spirit of the American Doughboy Statue will be rededicated in memory of those who lost their lives and served during World War I.

The rededication is being done through collaboration between local Veteran organizations, community volunteers, and the City of Summerville.Descendants of World War I Veterans, along with World War II Veterans are encouraged to attend as special guests. The ceremony will feature state and local officials including the Georgia Adjutant General and the Chaplain of the Georgia National Guard, musical entertainment by Trion and Chattooga Bands beginning at 1 pm, a bagpiper and a flyover of the Tiger Flight from Rome Georgia.

Following the Memorial Day Remembrance Program and Rededication of  “The Spirit of the America Doughboy” hotdogs and drinks will be served to those in attendance while supplies last and there will be a special patriotic musical performance by Chip Rowland. 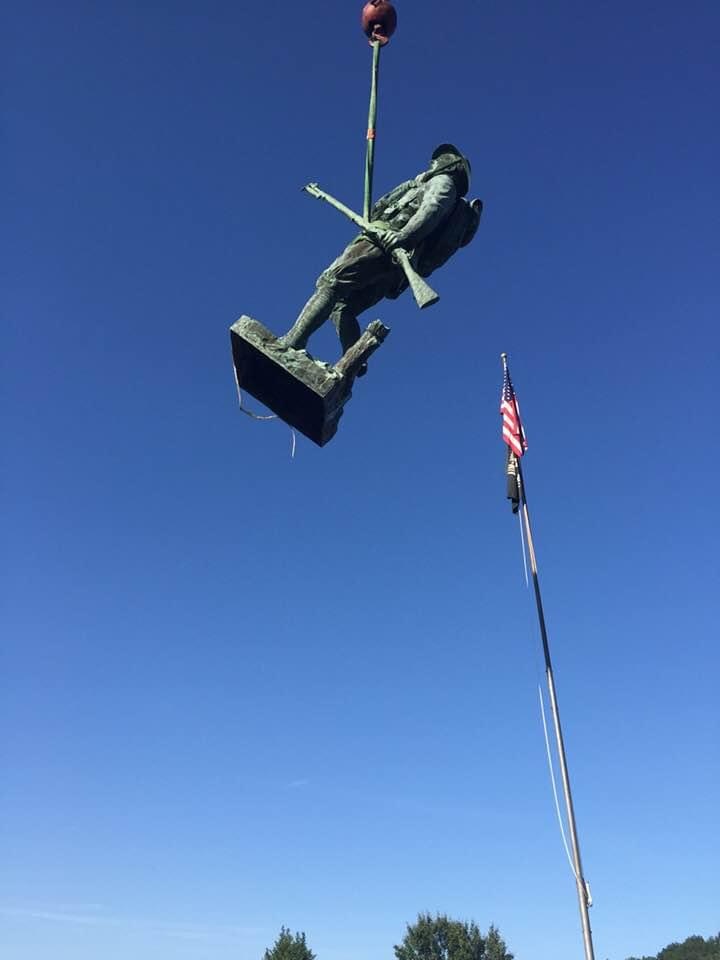 This will be the third location for the statue since its first dedication in April 1934 on the Trion Plaza. The initial unveiling was attended by Senator Richard B. Russell. The ceremony also marked the opening of the Trion Hospital and Leila Riegel Hall, a dormitory for women who worked at the glove mill. According to news accounts, five thousand people were in attendance for the festivities. 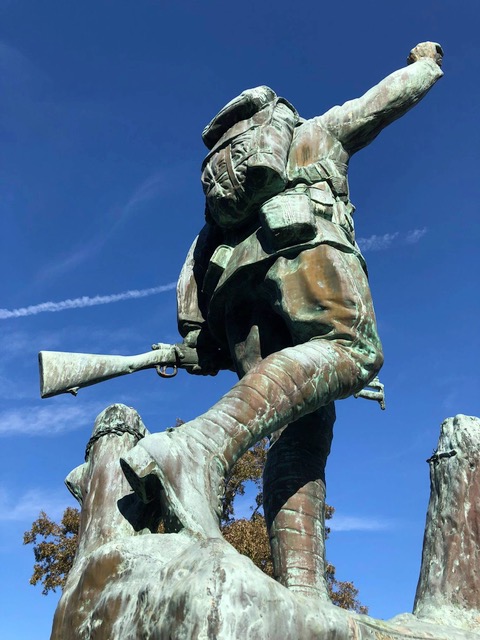 In 1988, the statue was moved to the front of the Chattooga County Memorial Home, the meeting place for the local VFW and American Legion. Recently, the veterans graciously offered to relocate the statue to the Veterans Memorial at Dowdy Park, where it will have a more prominent presence to be enjoyed by many more.The life size statue sits on a large pedestal on which there are four bronze plaques containing the names of over 400 local men who served in World War I.

The History Of The Spirit of the American Doughboy

The Spirit of the American Doughboy is the first mass produced memorial in the United States. Some have said due to the large number still displayed that it is the second most viewed image of a piece of public art, with the Statue of Liberty being the most viewed. The Smithsonian American Public Art Database and the E.Q. Viquesney Doughboy Database list at least 134 known locations. It is thought about 150 were produced in the 1920’s and 30’s.  The last one was placed in 1943. Regionally, there are four in Georgia:  Summerville, Nashville, Americus, and Griffin. There is also a stone version in Madison and a zinc version in Waycross, Georgia. There is one original cast bronze in Johnson City, Tennessee and three in Alabama:  Bessemer, Birmingham, and Anniston. The overwhelming majorities of the statues were made with sheet bronze (90% copper and 10% zinc) and were formed by machine die-stamping more than 75 separate pieces. They were then welded together over an internal metal frame. The statue is hollow and only weighs about 200 pounds. Many memorials are hand carved stone and one of a kind. This statue was able to be mass produced which reduced cost greatly and allowed many smaller towns to procure the memorial. They were manufactured in Chicago.

When the Great War, as it was called at the time, ended in 1919, the country was also recovering from the Spanish Flu epidemic.  The war effort abroad and on the home front had encouraged a surge of patriotism throughout the land. Woodrow Wilson’s Secretary of War, Newton Baker, encouraged communities across the nation to erect a memorial and monument to honor the doughboys. Ernest Viquesney, sculptor, born in Spencer, Indiana, was then working in Americus, Georgia for a memorial company making marble headstones for soldiers buried in Andersonville National Cemetery. Viquesney was interested in the memorial idea and began making preliminary sketches for a doughboy even before the war ended. Having veterans pose in uniform with gear and studying photographs enabled him to produce an accurate depiction of the soldier.  He finalized the design and it was copyrighted in 1920. His design was additionally supported when Viquesney received a letter in April 1921 that his doughboy was judged in a national American Legion competition of World War memorial sculptures to be  a “100 percent perfect” representation of the equipment and gear which the Doughboys wore. The statues sold for one thousand dollars. The first Doughboy was dedicated in June 1921 on the campus of Furman University in Greenville, South Carolina. It was actually the second statue produced. The first statue made was not dedicated until 1923 in Nashville, Georgia.  Nashville wanted to wait until they had raised all the money for the statue and an impressive tall pedestal. Meanwhile, it was on display in the lobby of the RylanderTheatre and the Windsor Hotel in Americus, Georgia.

The E.M. Viquesney Doughboy Database describes the statue as such: “While he wanted to depict an American soldier in battle, he didn’t want to depict excessive might or power by portraying a soldier charging or running forward. Instead, he wanted to depict the “spirit” of the American Doughboy’s determination to preserve freedom for their county and mankind so he portrayed a Doughboy striding firmly forward in the erect posture through “no man’s land”. One of the most readily recognizable features of the statue is the upwardly extended right arm with a grenade in the upraised hand. (Although he never said so, it is suspected that the pose was inspired by the Statue of Liberty. The sculptor, a canny salesman, probably counted on the fact that this would unconsciously strike a cord with the public, and thus help boost his creations’s popularity.)  The other is the two stumps at the right front and left rear. His left arm extends downward and his left hand holds a bayoneted 1903 Springfield rifle pointed forward at about thigh height. He wears a flat steel helmet, trousers bloused above the knee and puttees (wrapped leggings) below the knees, all of the type worn by the Doughboys in World War 1. He wears a rectangular bedroll backpack with a bayonet scabbard on the side, a square gas mask pouch on his chest, a cartridge belt, canteen, mess kit and first aid kit. Since he is striding, rather than running or charging, his leading left leg is straight. His right leg is bent and while the right heel is raised, the right toe touches the base. Barbed wire was originally strung loosely around his feet and the stumps but has usually now been removed for safety reasons.”

The term “doughboy” traditionally has been thought to have originated from two possible scenarios. First, the Continental Army soldiers had white piping on their uniforms. Legend has it that they rubbed white clay on it to keep it white, but when it rained the uniforms turned into doughy blobs. The second possibility dates back to the Mexican War of 1846-48 when the infantrymen made long treks over dusty terrain giving them the appearance of being covered with flour. Tradition goes on to say, they were covered in adobe soil and as a result called “adobes” which eventually morphed into “doughboys.” 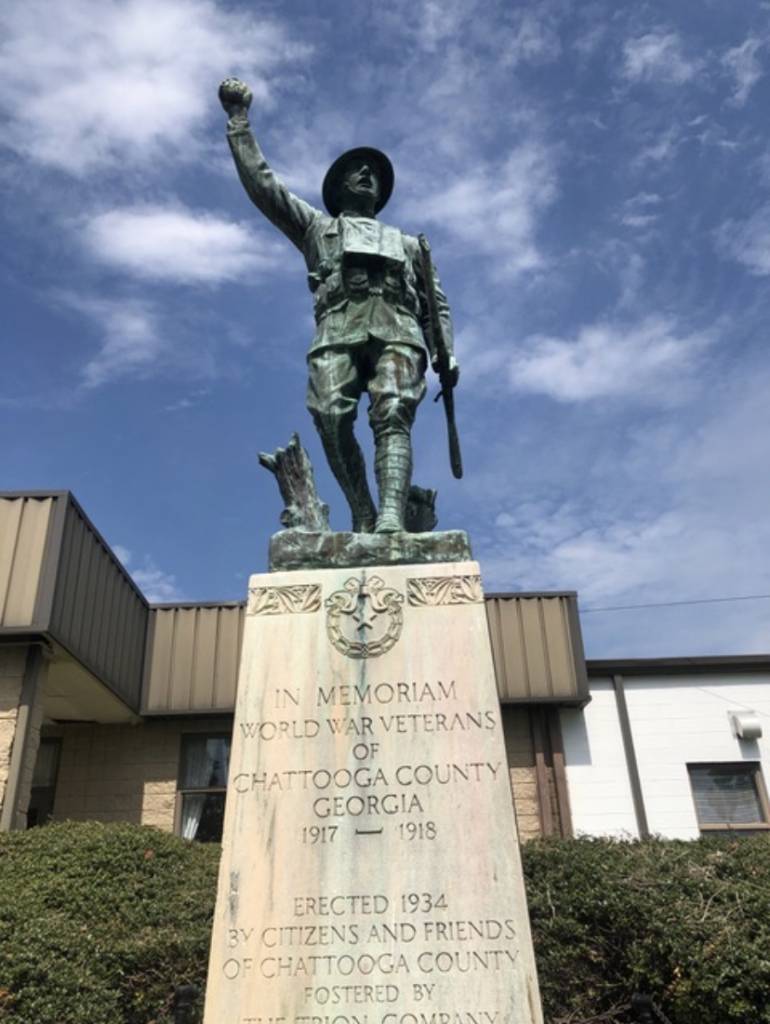