A black bear was spotted in Chattooga County on Taliaferro Springs Road.

Christy Hall says she saw the bear Monday evening on her way home from work. 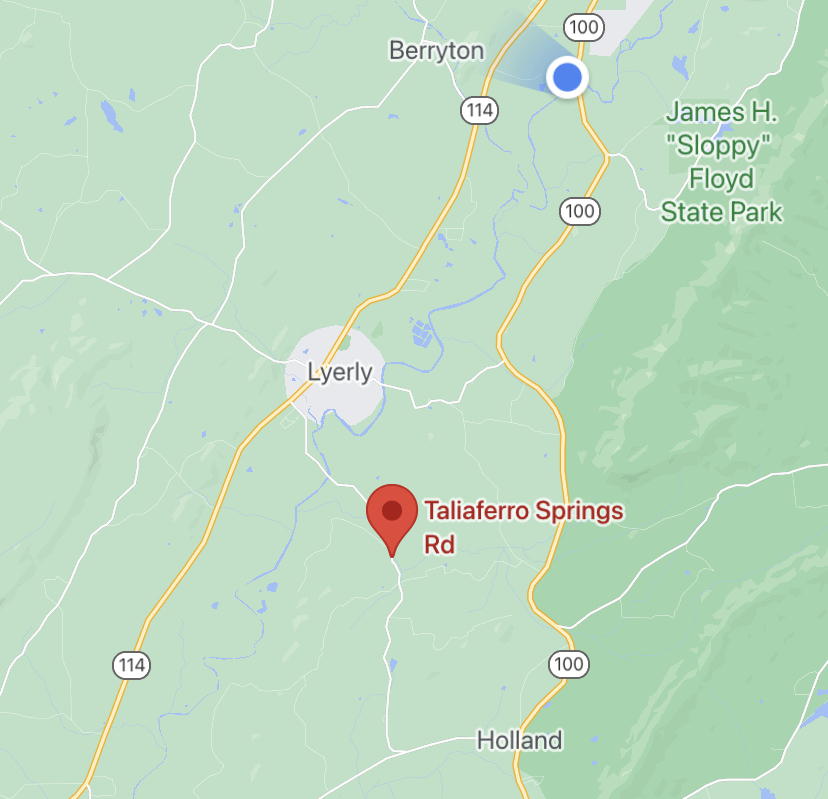 Prior to the 1800’s, black bears (Ursus americanus) were common throughout Georgia. Habitat loss, unrestricted hunting, and human intolerance caused a serious population decline. Thanks to sound wildlife management practices, bears have recovered to their present healthy population of about 5,100 statewide.

Black bears occur in three distinct regions in Georgia, but may range over the entire state at times in search of food or a territory of their own. Bear populations exist in the north Georgia mountains, along the Ocmulgee River drainage in central Georgia, and in/around the Okefenokee Swamp in southeast Georgia. Natural range expansion also has been documented in recent years.

Bears typically live in forested areas, favoring mature hardwood-pine forests that offer lots of natural food and younger forests providing security and a variety of fruits. Bears in Georgia use hollow trees, excavated holes in the ground, brush piles, rock crevices or other places that offer protection as winter dens.

Wild bears usually live about 8 to 15 years. Adults may be up to 6 feet in length and about 3 feet high at the shoulder. Adult males can weigh over 500 pounds and may breed at 1.5 years of age. Females can weigh up to 300 pounds, but don’t have cubs until they are 3.5-4.5 years old. Bears have poor eyesight, but an excellent sense of smell. They are good tree climbers, swim well and can run as fast as 30 miles per hour. The breeding season is in July and cubs are born in the den in late January or February. Bear cubs weigh about 8 ounces when born and are entirely dependent on the mother. Cubs stay with their mother throughout the first year, den with her during the following winter and stay with her until she finally drives them away the following spring. Due to this extended care for their young, females only produce a litter every other year.

Bears are omnivorous, meaning they eat a variety of foods depending on what is available locally at a given time of year. Their natural diet consists mostly of berries, fruits, acorns, grasses, and animal matter, including insects or mammals—even deer. Bears are naturally attracted to food smells like cooking and garbage. Pet food, bird seed,
suet, compost piles, gardens, beehives and cornfields also attract bears. Non-natural foods are often easier to get, and over time, the more a bear is “rewarded” for coming around, it will begin to lose its natural fear of humans.

Most nuisance issues can be resolved through simple actions, like removing bird feeders and outdoor pet food, or storing garbage in an area unavailable to bears, such as in a garage or enclosed building. Removing attractants is critical in resolving conflicts between people and bears. It may take several days for the bear to learn that it will no longer find a free meal. Usually, the bear will move on when the food source is gone.

Trapping and relocating bears is usually not the best solution for residents or bears, because other bears may continue to cause problems if attractants are not removed. Relocated bears often try to find their way back home, making them more likely to be hit by cars or die from other causes. Moving a bear is a last resort and only warranted if a bear persists in being a nuisance after the removal of all attractants, or when major property damage has occurred or is considered likely. Bears exhibiting behaviors that threaten public safety must be euthanized.
When attractants cannot be removed, the installation of an electric fence may alleviate bear problems (e.g. bee-yards, gardens, chicken pens). When camping or hiking, food should be stored in a vehicle. If backpacking, hoist food packs high into the air and far away from the trunks of trees.

There are no recorded bear attacks on humans in Georgia, and no fatalities. There have only been two documented fatal black bear attacks in the Southeastern United States.

Learn the Bearwise Basics and more
at www.BearWise.org.

Black bears are the only bears found in Georgia and are a high priority in the state’s conservation strategy. … They may be legally hunted in the fall in certain areas, but killing bears any other time or in an area that is not approved is considered poaching and is illegal.