The story is one many in rural Chattooga County tend to want to forget or at least not talk about, but not Stacie Scoggins Marshall. The title of the article says it all, “Her Family Owned Slaves. How Can She Make Amends? Stacie Marshall, who inherited a Georgia farm, is trying on a small scale to address a generations-old wrong that still bedevils the nation. 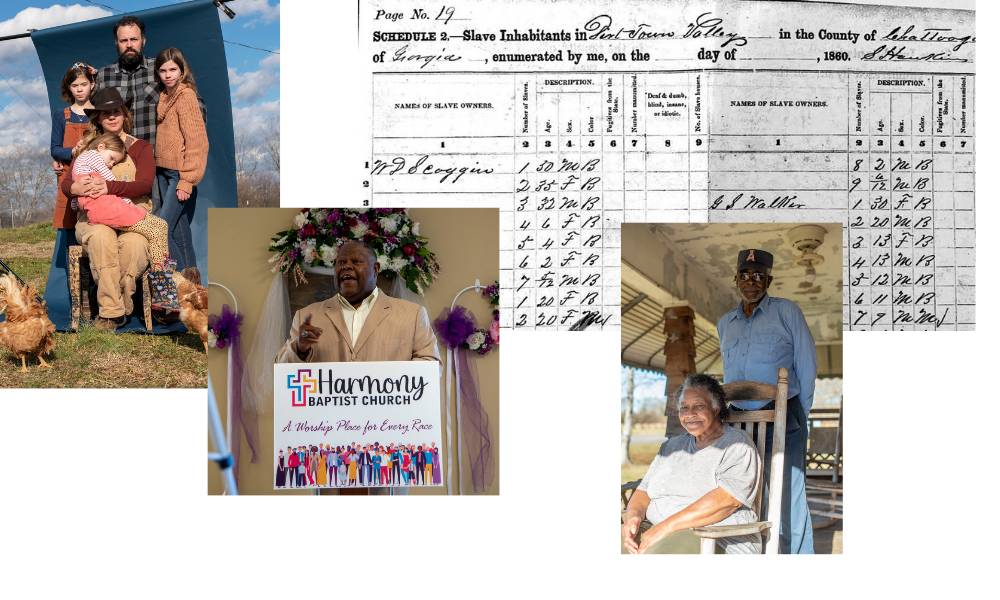 Monday, the day after Independence Day, a story will be featured on the front page of The New York Times with the location showing as Dirt Town Valley, Ga. Yes, our Dirttown, which I always spell as one word, unless I am being fancy and call it by its Cherokee name, Kartah.

The story is one many in rural Chattooga County tend to want to forget or at least not talk about, but not Stacie Scoggins Marshall.

The title of the article says it all, “Her Family Owned Slaves. How Can She Make Amends?

Stacie Marshall, who inherited a Georgia farm, is trying on a small scale to address a generations-old wrong that still bedevils the nation.

The Scoggins family has owned 300 acres of farmland in Chattooga County for over 200 years. It is easy to do the math, calculate the years, the size of the farm and understand the unsaid, the unavoidable truth, the family, her family at one time owned slaves.  Seven slaves to be exact, and now Ms. Marshall, 41, wants to make the sins of the past, right.

But, how will one woman in Chattooga County Georgia right this wrong? Her family land history has one more turn in it, the family’s first tract of land was acquired in an 1833 lottery that gave Creek and Cherokee land to white people.

Stolen land–that had black slaves–and your family benefited from it–how do you make that right?

“This has been one of the hardest most honest stories I have ever told. I am thankful for my community and spiritual elders Melvin and Betty Mosley and Gene and Nancy Kirby,” Marshall said.

Marshall knew where she could go for help, Mr. Melvin Mosley, a preacher, an educator, and a black leader in Chattooga County. To know Melvin Mosley is to know every word that comes from his lips are prophetic. As a black kid, he attended the segregated schools, he gets it. He has lived “it” all his life. The “it”, that as a white woman I can’t begin to describe, so I won’t.

From the article: “On a summer day in 2019, Ms. Marshall sat in their yard (the Mosley’s) and told them she wanted to start sharing the whole, hard story of Dirt Valley, and make some kind of amends. She asked if she was on the right path.”

“Let’s say that’s the water under the bridge,” he said. “You didn’t do anything wrong.” All she needed to do was to pour as much love on their valley as she could.

“In all of our families, Black or white, there are some generational things that are up to us to break,” he told her. “And when we break it, it is broken forever.”

The article ends with a visit of Ms. Marshall’s to another black family, her neighbors across the street, the Kirbys’. The visit with the Kirbys’ is particularly hard to read, not because of slavery, but the injustice this family received over the death of their son in 1967, not 1867.

From the article: And there was the death, at age 4, of the Kirbys’ son Gordon Eugene. A photo, with a lock of his hair, hangs in their den. On Sept. 10, 1967, a white teenage driver sped down the road not far from the Scoggins farm and struck him. Mr. Kirby saw it happen. “I was across the road holding my other baby in my arms,” he said.

Standing on the Kirbys’ porch, Ms. Marshall said her goodbyes and headed back across the road. The path to reconciliation still wasn’t clear.

“These are people that I love dearly,” she said. “How do I put a number on what they have lived through?”

The article pulls a scab off of a national wound that has never healed, here in our neck of the woods, we have just avoided talking about it, until now.

The article does a fair job to make “us”, Chattooga County residents, not appear as country backwoods bumpkins, but does interject politics whenever the author can and needlessly at times. It doesn’t matter that Ms. Marshall had a CrossFit class with Marjorie Taylor Greene. Honestly, it doesn’t matter how Ms. Marshall votes, but that too was included.

For this isn’t a republican/democrat issue, as we all know Lincoln was a moderate Republican, it isn’t a black/white issue. It is another sad part of the history of the greatest nation on Earth, a part we are still searching for answers to, answers owed to Native Americans and Black Americans.

Chattooga County’s history begins with a time when the area where the Scoggins’ family farm is located was known as Kartah, the Cherokee name for Dirttown,  followed by the shameful removal of the Indians from the six Cherokee villages in the Chattooga County area, then the white settlers arrived, claimed the Indians’ land and more shame came with their arrival, slaves.

We as a county have a history, it isn’t all beautiful, but it is the story of us, and Stacie Scoggins Marshall is ready to face the history, come what may.