While many things have changed in ProRodeo since Ryan Jarrett’s first trip to the Wrangler National Finals Rodeo, one thing has remained consistent; Jarrett. He returns to the NFR for the 12th time in his career, and he’s still chasing another world championship. He accomplished that during his inaugural run at the NFR in 2005, when he shocked everyone on his way to the all-around world title. Originally from Summerville, Georgia, Jarrett lives in the small southern Oklahoma town of Comanche with his wife, Shy-Anne, and their toddler, Jurnee. 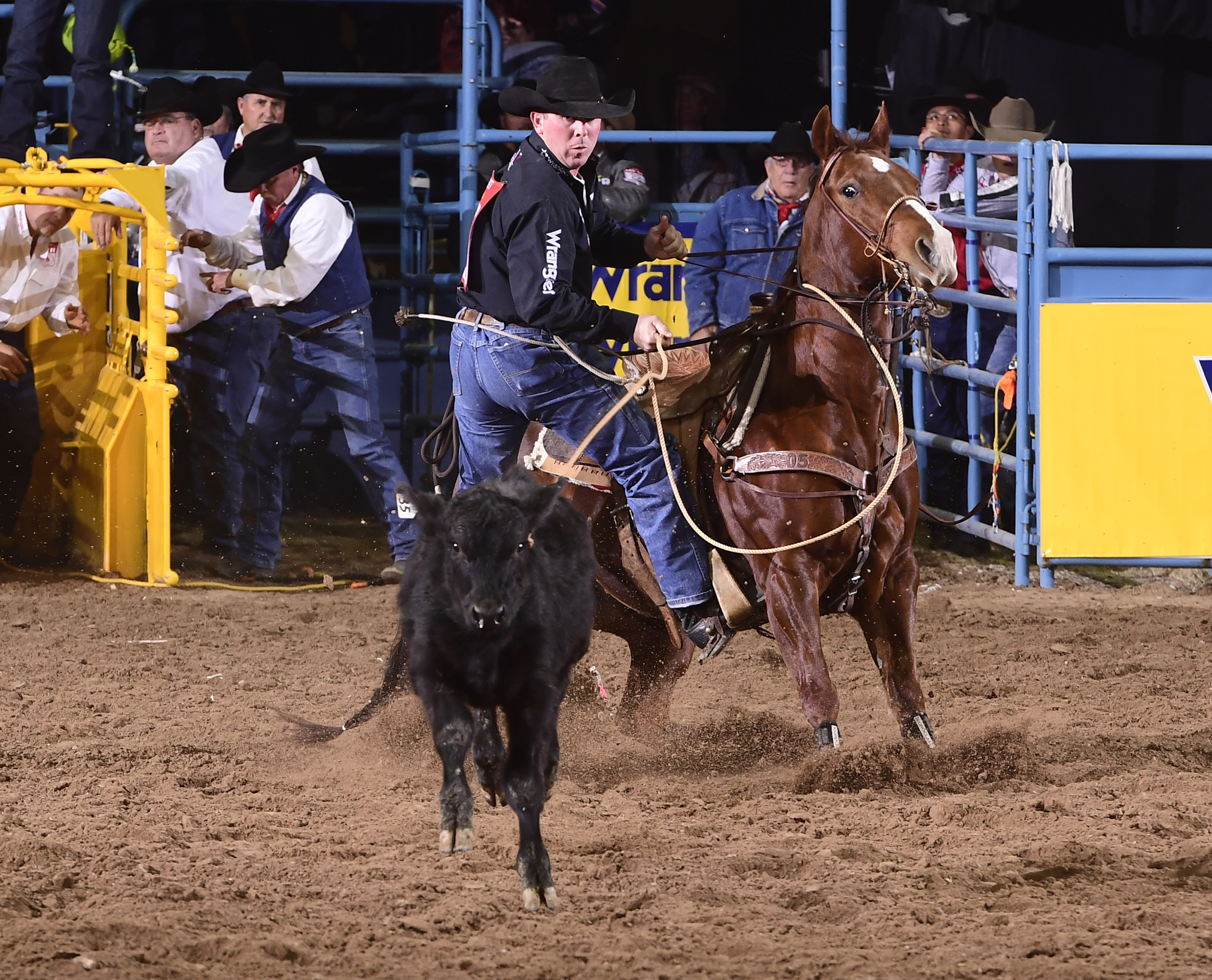 COMANCHE, Okla. – The first time Ryan Jarrett qualified for the Wrangler National Finals Rodeo in 2005, he was just 21 years old and looked like he could go days without shaving.

Much has changed in the 16 years since, but Jarrett continues to be among the greatest cowboys to have ever played the game. He returns for his 12th trip to the NFR, set for Dec. 3-12 at Globe Life Field in Arlington, Texas.

During that initial championship, the Georgia-born cowboy qualified in both tie-down roping and steer wrestling, then left Las Vegas as the third-youngest all-around world champion in the Professional Rodeo Cowboys Association’s history – only legends Ty Murray and Jim Shoulders were younger.

Since then, Jarrett has dabbled in multiple events, but he’s maintained a focus on tie-down roping. He’s only missed out on playing on rodeo’s grandest stage just four times in his storied career, including the 2019 season when he finished the regular season 22nd in the world standings – only the top 15 on the money list in each event qualify for the NFR.

“It damn sure feels good to know I’ve still got it and can still finish the year in the top 15,” said Jarrett, 36, originally from Summerville, Ga., but now living in Comanche with his wife, Shy-Anne, and daughter, Jurnee. “I’m really excited that it’s going to be in Texas. It’ll be a different atmosphere not being in Las Vegas this year, but it’s nice that it’ll be close to home.”

It’s just a 140-mile venture from his home to his playground for 10 December nights, compared to nearly 1,000 miles for his previous NFRs. Alas, because of the COVID-19 global pandemic, Las Vegas was not an option to host ProRodeo’s grand finale in 2020. When Texas offered up the home of the Rangers and the 2020 World Series, the cowboys made the one-year move to ensure the championship took place in a wild and unpredictable year.

“It’s been quite the experience,” said Jarrett, who credits his sponsors – Wrangler, Cactus Ropes, WW Livestock, PHT Products and Outlaw Equine – with helping get up and down the road, especially during a tumultuous season. “We did pretty good getting entered so we didn’t have many all-night drives, but we sure put on some miles.

“We had a lot of guidelines that you had to follow, and you’d get aggravated with it, but you still want to have the event. I felt like everybody did their part to make sure we had rodeos to go to this year.”

That was key. In a normal year, the Professional Rodeo Cowboys Association has around 700 events across North America. In 2020, more than half of them were canceled, including many of the largest rodeos. That meant fewer opportunities and more miles between the rodeos that did take place.

“When you got there, I’d say there were 150 guys at dang near every rodeo you went to,” he said. “That makes it even tougher, because everything has to go just right for you to win anything.”

In rodeo, there are no guaranteed incomes. Contestants must pay an entry fee in order to compete, and they only receive a salary at each rodeo if they do better than most do the field. In tie-down roping, the faster the run, the bigger the paycheck, and there were fewer of them to go by.

Jarrett enters this year’s NFR 11th in the world standings after having earned $52,080. While leader Shad Mayfield has a big advantage – Mayfield sits No. 1 with $156,668 – the rest of the field is clumped together. Jarrett is just $15,000 behind the No. 2 man, four-time world champion Tuf Cooper. That ground could be made up on opening night.

“Looking back at the season, there were a lot of rodeos that were one-headers,” Jarrett said, referring to one-round rodeos instead of events that featured multiple rounds; by not dividing the money up with more rounds and the aggregate payout, it offers bigger dollars to its top finishers. “I shortened the start, and I finished with a wrap and a hooey quite a bit.”

In essence, he took more chances. In timed events, cattle receive a head start based on a barrier system; if Jarrett didn’t allow the calf its appropriate start, then he’d break the barrier. Every broken barrier included a 10-second penalty, meaning he would finish out of the money. Jarrett made sure to be on the barrier each run, risking the potential penalty.

He also made one wrap around the calf’s legs instead of two before putting together the final half-hitch to secure the tie. The risk was potentially allowing the calf to break the tie before six seconds elapsed, which would have resulted in a no-time.

That was definitely bounty in his risk-reward moves. With COVID breathing down his neck all season long, it was well worth it. When he wasn’t on the road, he allowed himself to enjoy his time at home, which is quite uncommon for ProRodeo cowboys that make their livings traveling North America one rodeo at a time.

“When everything shut down, I was contemplating going out to California for that West Coast run, and it all got canceled,” he said “It didn’t bother me whatsoever. Thankfully I’ve got a little business that I can have a little income when I’m not rodeoing.

“Her” is Jurnee, who is 21 months old and the apple of her daddy’s eye. She already has a pony to ride and by following in the footsteps of her cowboy daddy, cowgirl mommy and family of true hands around livestock, she’ll likely be involved in the family business as she matures.

This will be her first NFR experience, and though she won’t remember any of it except through videos and images, it’s part of a life in which she is being raised.

Over the last 16 years, Ryan Jarrett has seen a great deal. He went from being a young lad with a wide grin and a well-deserved gold buckle to now serving as a veteran cowboy who can figure out a way to win in the toughest of conditions. He’ll utilize every experience possible as he runs 10 calves inside a baseball stadium in north Texas.

“I know I just need to rope smart, because they pay in the average,” Jarrett said, referring to the top times in the 10-run aggregate. “If you don’t have the best throw, just make sure you get him around the neck. I’m not against throwing my rope when I need to, but I don’t need to just do it to try to be fast.

“When you rope smart, you give yourself a better chance to win.”

Charles Marks: The Last of the Mohicans
Group Says Downtown Summerville Christmas Decorating was a Labor of Love
Posting....