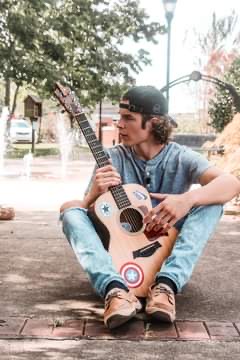 “The feeling of having my first single out, is unbelievably surreal. For the first time since I’ve been doing music, I actually feel like I’m one step closer to reaching my dream of being a professional musician,” Curtis said.

Curtis said he made the single in his bedroom, “with the help of a guitar, a microphone, and a MacBook, I was able to record and process it. Did what I could with the resources I had.”

Curtis has been able to upload Nice Guys to platforms like Apple Music and Spotify through the company Distrokid. They help millions of artists around the world, share their music to 20+ different platforms. The company offers in limited uploads for as low as 19.99 a year.

Listen to the song here:

When asked about what inspired the song Curtis had this to say: “ideas for the song? Oh boy…. All through out high school and for as long as I can remember, I was what you would call a nice guy. Girls would tell me things like: “You’re not bad enough” or “You’re too nice” seems they were into guys who treated them poorly. I guess I never fit the part. I would always here the saying “nice guys finish last” and it would honestly break my heart. I finally sat down a couple months ago and wrote Nice Guys, because I know I’m not the only one. There’s other fellas who can relate, I know there is. When it comes to the lyrics and the music, it really depends. Sometimes the lyrics will come first, then the music, but in most cases the music comes first. Just like with Nice Guys, I made up the riff up first then added the lyrics on top of it. Both the lyrics and the music are just as equally challenging to write, it just depends if I’m inspired in the moment or not.”

Curtis started music at the young age of ten when he taught himself how to play the drums at church. He was in a Christian band with his brothers called “The Young Disciples”. From the drums he went on to learn to play the guitar, piano and ukulele.

He is a 2019 graduate of Chattooga High School and he says his heart is in music, “I’d love to be on the radio or stage one day inspiring millions.”

He is currently attending GNTC majoring in business.