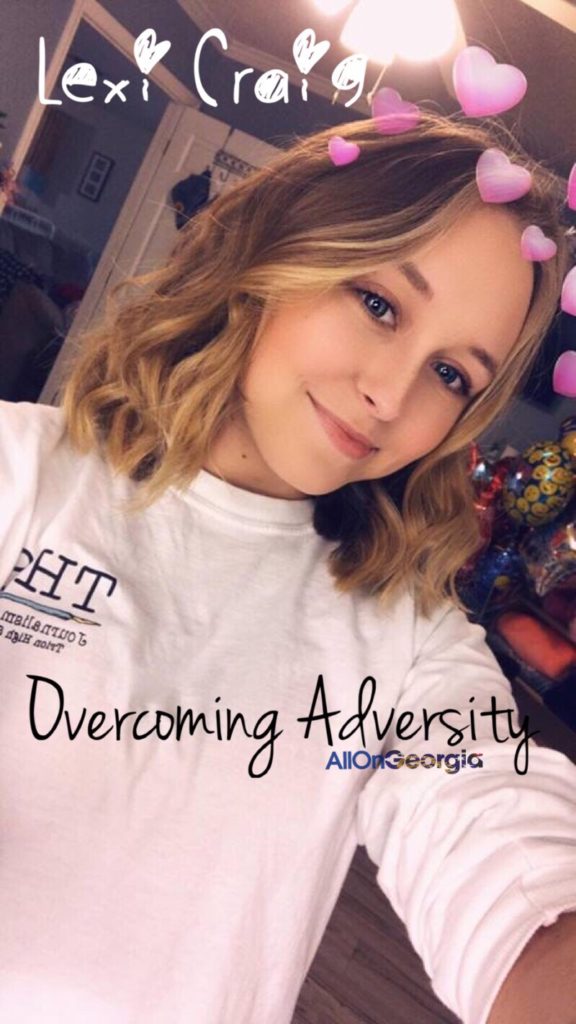 The human brain is considered to be one of the most complex organisms on earth. Its full capacity is still beyond our reach. But all too often, it’s random errors can cause devastating effects. One of those random errors is a collection of small blood vessels that become enlarged and malformed in structure. A malformation like this can disrupt the blood flow in the brain. Unfortunately, this disruption can cause headaches, seizures, hemorrhaging or worse and, while the malformations can occur later in life, most people who have the condition are born with it.

Not Your Normal Headache

Lexi Craig was one of those rare children born with the unfortunate malformation of vessels and veins known as Cerebral Cavernous Malformation. She has lived a normal life, unaware of her condition for 17 years.  On February 12th, 2018, Lexi started throwing up and experiencing numbness in her left arm. She was rushed to the hospital and, after a detailed brain scan, doctors discovered a large mass on her brain.

Initially, ER doctors wanted to treat Lexi for a migraine. “When we arrived at the hospital, she couldn’t walk. Her speech was slurred, and her vision was blurry,” said Lexi’s mother, Melissa Chamlee. “The entire left side of her body was weak, numb, and she had sensory problems. I knew it was more than just a migraine.”

Melissa was adamant with doctors that something serious was wrong. “I pretty much refused, letting them know that was not all that was happening to my child and that they weren’t going to get us out of there without some imaging done to prove to me nothing was going on internally,” Melissa recalled.

After a shift change, a second ER doctor heard Melissa’s plea and ordered an MRI. “He told us that we might be there several more hours waiting on it, and I told him I didn’t care how long we had to wait because we weren’t leaving without answers.” After the MRI, the doctor pulled Melissa into a different room down the hall to deliver the news. “He told me how glad he was that I had pushed for the MRI and advocated for my daughter when I knew something was wrong,” said Melissa.

The good news was that Melissa had pushed for answers and the doctors had finally listened. The bad news was what the scans had revealed about her daughter’s brain. “The first diagnosis we received was basically a death sentence. It looked as though she had a high-grade glioblastoma,” said Chamlee. The condition is a rapidly-growing cancerous brain tumor that can be fatal. Hospital staff kicked into high gear and began prepping Lexi for further testing. “Everything started moving quickly at that point and we had family arriving to be with us and a neurosurgery and oncology consult. Then they sent her for an angiogram to rule out another possibility.”

For the next six hours, time stood still for Melissa and her family. Lexi’s entire future hung in limbo and brain cancer was the diagnosis. It was only when Lexi was admitted to the PICU that the diagnosis changed to a cavernous malformation. The head radiologist and the neurosurgeon sat down and looked at the MRI very closely together and determined that the images were more consistent with a malformation than cancer. While doctors appeared somewhat relieved, implying that this was a much better diagnosis, the family was still on edge. Lexi’s mom was unsure of what to believe and feared the worst. “They were telling me they were 90% sure it was a Cav-Mal but would only be 100% sure once they took it out,” said Melissa. And the ‘take it out’ part wasn’t a procedure that sounded like something to look forward to.

Lexi was in the hospital for the next seven days. Her family was in shock and her mother’s world seemed to hang in the balance. “I never left,” said Melissa. “I never even went outside for fresh air. I couldn’t make myself go any further than down the hall or the cafeteria for a few minutes.” On February 15th, Lexi turned 17 years old in a hospital room surrounded by family and friends.

Lexi’s condition wasn’t discovered until she was nearly 17 but she actually started suffering from headaches when she was just 10-years old. “We thought it was because I have a history of migraines, so we treated her for migraines,” says her mom. “Doctors never mentioned doing any tests because migraines can be hereditary. Thinking back over the last 7 years of her life I can definitely remember times when Lexi was miserable with a migraine,” Melissa said.

Once Lexi was stable enough, the family traveled into Atlanta for a second opinion. The specialist they met with agreed with the Cav-Mal diagnosis and confirmed the details that the first neurosurgeon had told the family. “He said he would be happy to take her on as a patient and perform her surgery but, if we liked a surgeon closer to home, then he recommended we stay close to home just in case she had any complication… it made a lot of sense. I couldn’t imagine trying to get to Atlanta if something went wrong after we were home,” Melissa said.

Since February 12th, Lexi and her family have been a crash course to discover more about her condition and the potential effects for her.

A CCM consists of a tangle of capillaries (the small blood vessels that carry oxygen-rich blood deep into the brain) in which the vessel walls are thinner and less elastic than normal, and more prone to leaking. That leakage can create small “caverns” of blood within the brain. It can be diagnosed at any age, but it is most likely to be detected in young adults. A Cav-Mal may remain stable for decades and never cause any symptoms at all. But it may begin to leak (hemorrhage) intermittently over the course of months or years.

In some instances, a CCM may cause substantial bleeding in a single episode, with significant hemorrhage leading to severe neurological deficits or even death. If the cav-mal is located in the surface layer of the brain (the cerebral cortex), it may also cause seizures. The prognosis for a cav-mal is different for each individual, based on the size and location of the malformation and on its tendency to hemorrhage or not. Cavernous malformations are thought to be genetic in origin, so they cannot be prevented. They do appear to run in families, although many people diagnosed with a cavernous malformation do not have any family history of the disease.

There is no known history of CCM in Lexi’s family.

For Lexi, an end to the vicious cycle may be near. She will travel to Chattanooga and undergo brain surgery on April 25th. While every surgery comes with risks involved, this surgery has some extremely scary risks. Her CCM is located in the gross motor area of her brain and has already affected the left side of her body. She is pushing through the pain with physical and occupational therapy each week to regain all the strength and movement that is possible before her surgery so that she can go into surgery as strong as possible.
Brain surgery risks include problems with speech, memory, muscle weakness, balance, vision, coordination, and other functions. These problems may last a short while or they may not go away but doctors are hopeful that none of the complications will be permanent. As with any brain surgery, blood clots or excessive bleeding in the brain, seizures, stroke, coma, infection in the brain, wound, or skull and brain swelling are risks associated. The surgery will last 4-6 hours; longer if there are any complications.

The family is moving forward with cautious optimism. “She has been so strong through all of it & she has amazed me every step of the way,” says Melissa. Lexi is a free spirited, fun-loving, 17-year-old. According to her mom, Lexi enjoys hanging out with her friends and family, she likes to hike and swim, and she is an amazing big sister ever to all of her little sisters & brothers. She is an animal lover and a follower of Jesus. She is a daughter, granddaughter, sister, friend, Christian, niece, and so much more.

Lexi is currently at home preparing for surgery and isn’t expected to be returning to school following the procedure. During this time, Melissa, a teacher for Trion City Schools, will be staying at home to make sure Lexi is properly cared for and is not scheduled to return until after Lexi has recovered from the surgery. Lexi is just one of five children and the community has several fundraising events to assist the family with medical related costs. A GoFundMe account has been set up for Lexi.

To further aid in fund raising efforts, local artist, John Aycock, will be auctioning off some of his art work on April 12th. Aycock assembled a tribute video for Lexi and painted her portrait. The bidding will be done completely through Facebook where Aycock will be posting a new photo album titled “Phoenix Exhibition”. There will be four pieces available for bidding. To place a bid, simply leave a comment under the image with the amount you wish to bid similar to a silent auction. “Being that this is a fundraiser for Lexi and her family, there will be a $50 minimum to start the bid,” says Aycock. “Anything beyond that is fair game. Bid $5 or $500 as you compete. The highest bidder takes it home.”

“I just thought that maybe I could do something to help them. I can paint and make videos… so that’s what I did. The hope was just to get as much attention towards them as possible,” Aycock said.

There is also a golf tournament planned for Lexi.

Lexi’s recovery will be approximately six weeks, but it’ll take six months or more before she’s really feeling like herself again in the event there are no complications. While her recovery will be tracked in weeks and months, Lexi’s journey to healing will be measured in the memories yet to be made.