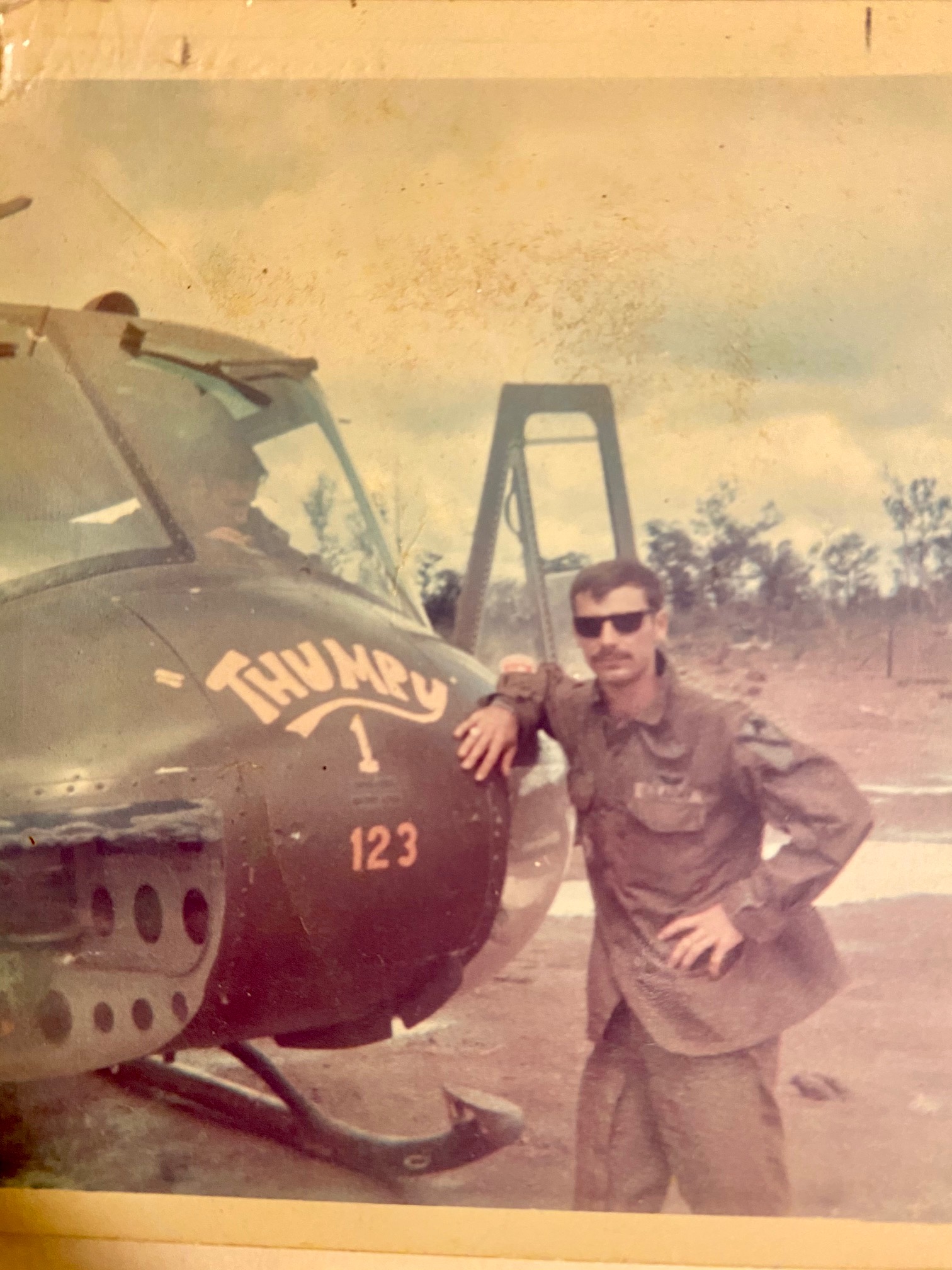 There will be a  Quilt of Valor ceremony to honor Lyerly resident Robby White, on May 30th. It will be held at the Lyerly Community Center at 2 PM.

Robby White is one of the most highly decorated Vietnam veterans from Chattooga County. He was the recipient of several top service awards for heroic actions “above and beyond the call of duty” in Vietnam.

White was awarded two Distinguished Flying Cross, the Air Medal, and the Bronze Star Medal for meritorious service as a Specialist Four (he finished as a Sp 5) in the United States Army Company C, 229th Aviation Battalion Assault Helicopter Airmobile. 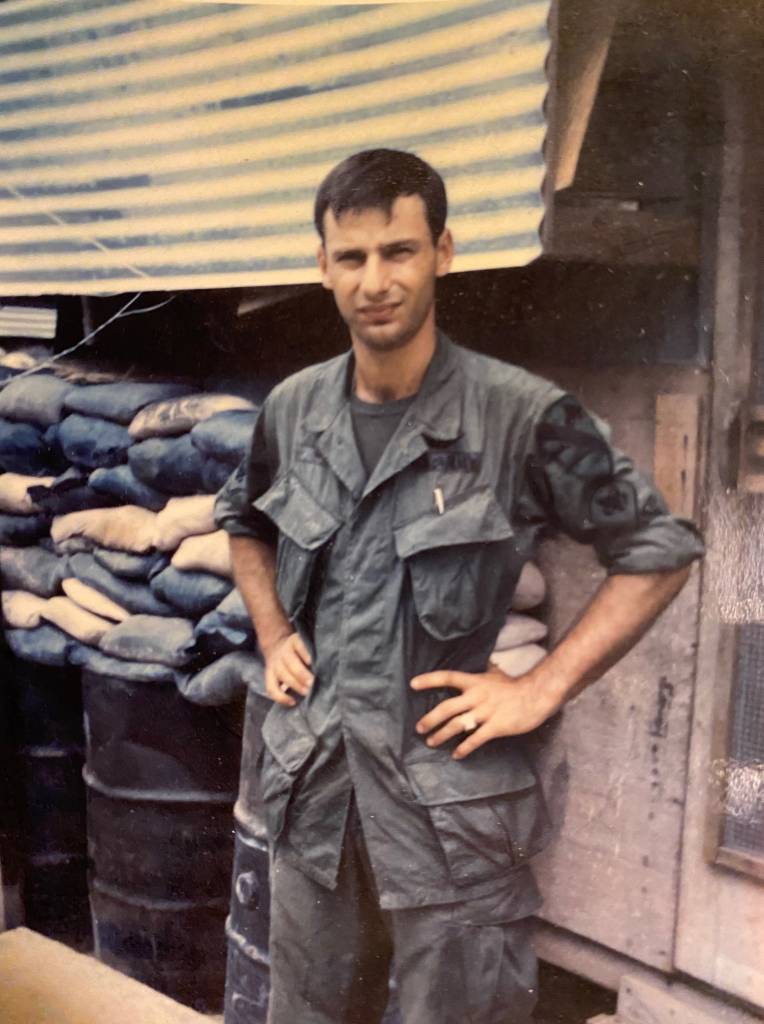 Robby grew up in Lyerly, the son of a barber and school teacher. “Growing up Lyerly was the perfect place to grow up, your dad, Roger, Ronnie Stephens, Butch Gardener, Mike Caldwell, we ran the town. Everybody knew everybody, we’d hear the train whistle and all take off on our bikes to the depot to watch the train.” Robbie White had an all-American childhood, capped off with graduation from Chattooga High School in 1967 as the Class President.

Between semesters in college he worked selling Bibles, the big fancy Bibles with gold lettering, “your grandmother probably bought one from me.”

“I got my draft notice that said 1-A, I called them and said I was in school at Reinhardt, they said they knew that, the minute classes were over I was going in the Army. I made some pretty good grades over there, too…” Robby says pondering the life that was never lived as a college graduate.

On February 4, 1969 Robert L. White was officially drafted into what he referred the Yankee Army.

He received basic training at Fort Benning. “White, what do you want to do in this man’s Army?” asked a ranking officer there.

He had taken many tests to see what jobs would best suit him, the first job suggested was radio repairman, “I said, no I don’t want anything to do with radio, that’s the first person they shoot, the guy with the radio.” 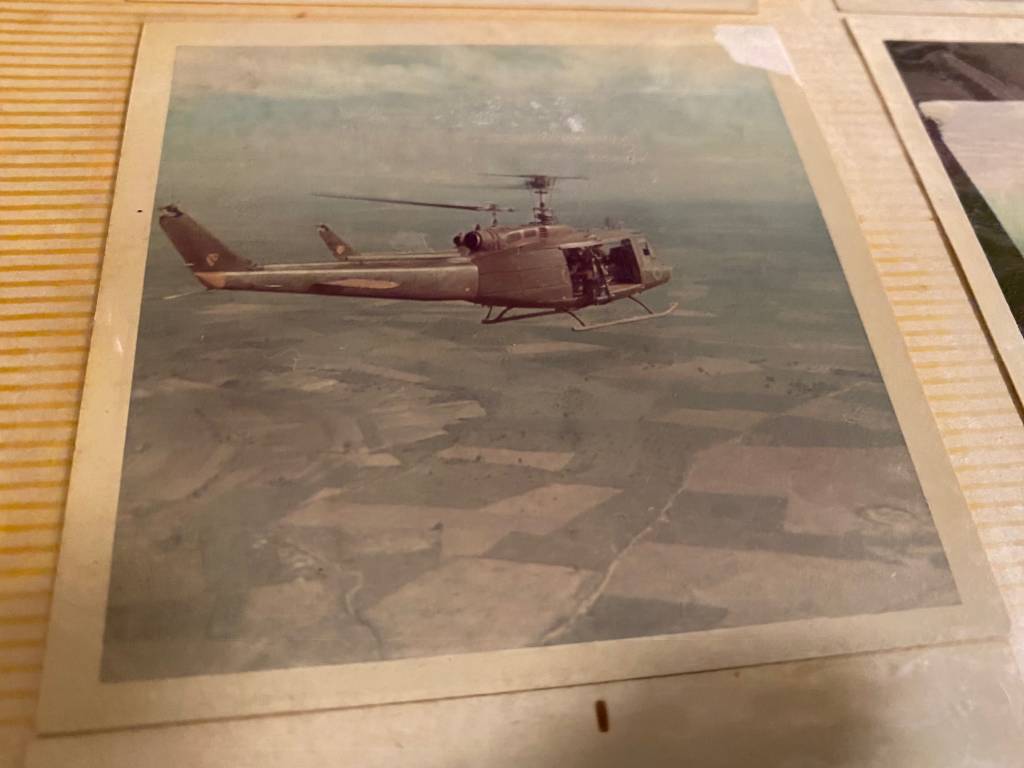 White selected aircraft maintenance over radio and was sent to AIT (Advanced Individual Training (AIT) is where you will learn the skills to perform your Army job) in Fort Eustis, Virginia and from there he got orders to go straight to Vietnam.

White arrived in Vietnam on July 31, 1969. He was a crew chief for Assault Helicopters, “my job was maintenance and protect the left side of  the helicopter with a M-16.” 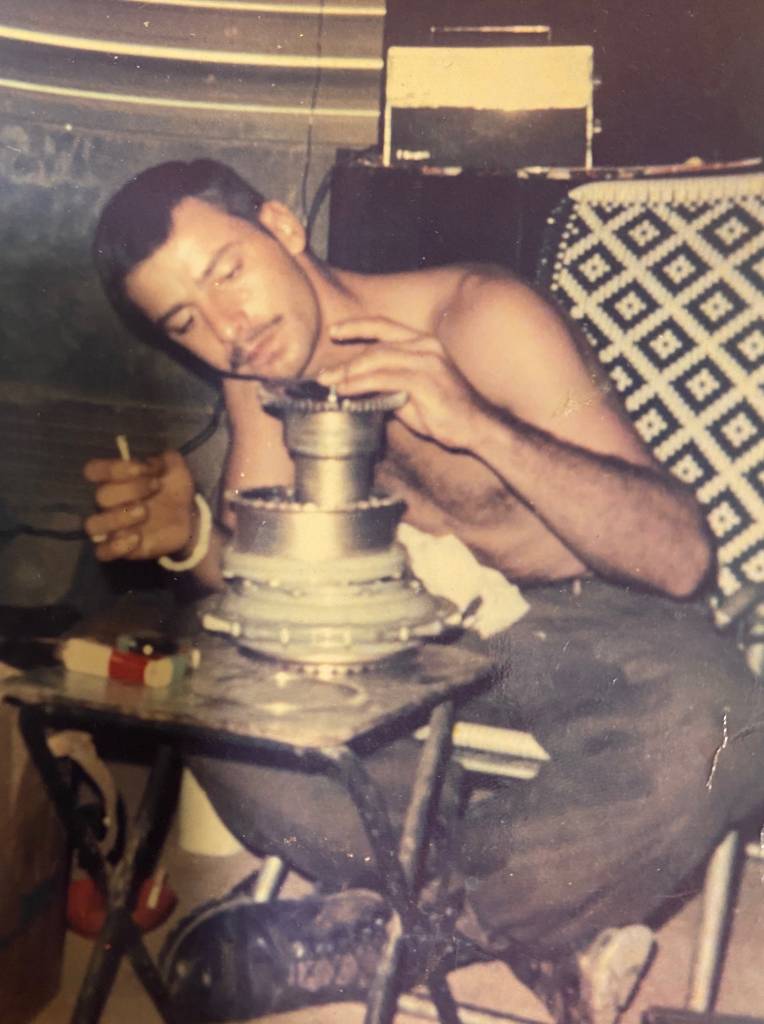 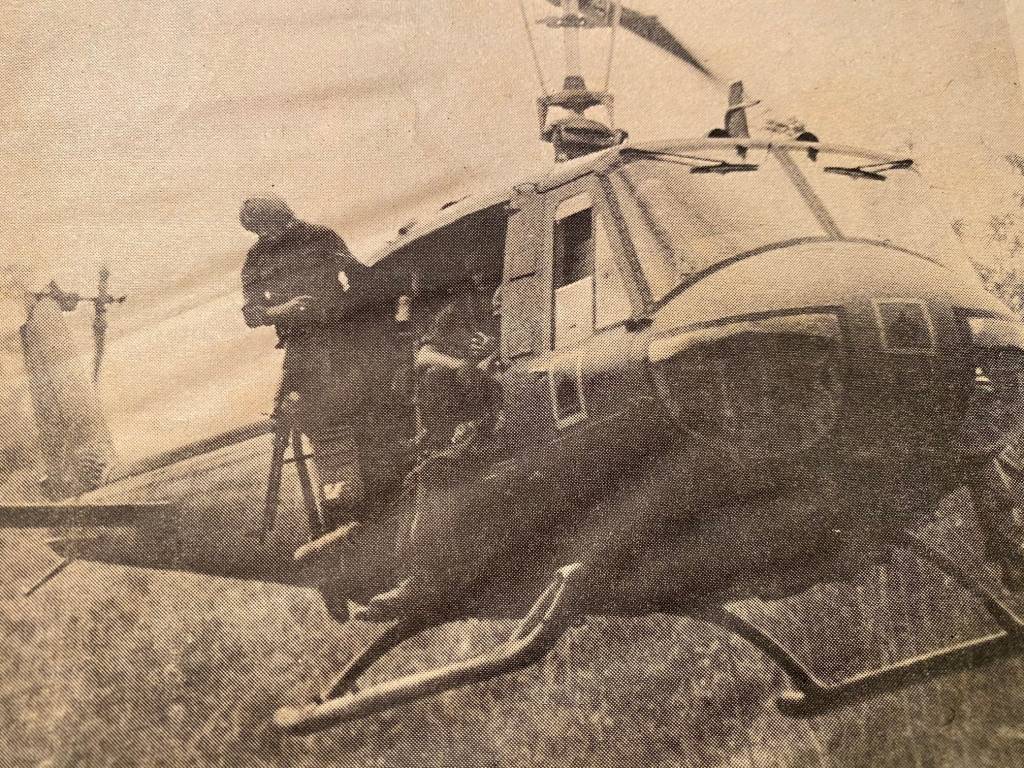 “I would put my foot on the skid and hang my toe underneath the post and shoot in front of us,” White explains.

When he arrived to Southeast Asia, he recalls being told from his superior in the Army, “bird came in today it’s 917– it will be your bird, it cost $250,000 and you and up to 11 other people will be flying on it, if it falls out of the sky, it’s your fault…”. “That scared me to death.” Robby knew his job was to keep the helicopter from falling out of the sky. He said that as long as the rotor kept turning the pilot could alter the pitch and land, even if it was a hard landing. 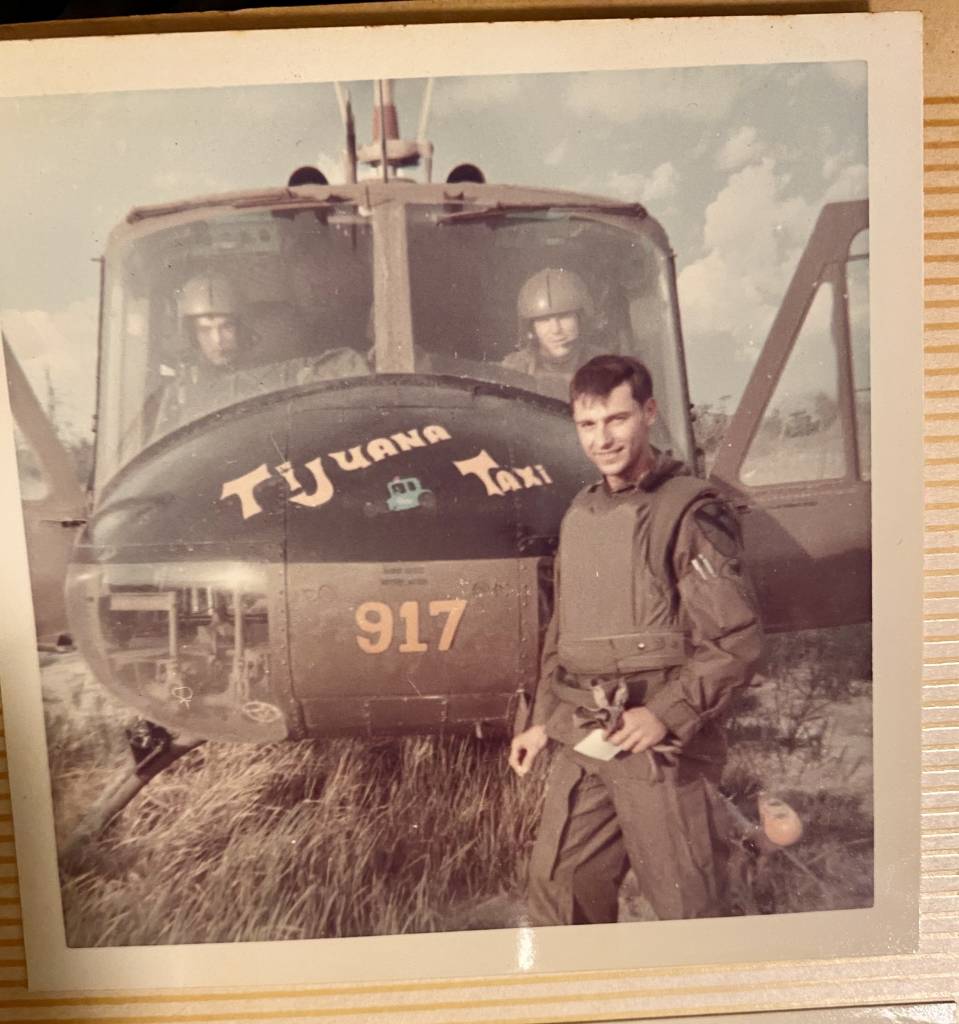 An average flight day in Southeast Asia was 10 hours a day with 6-8 hours of maintenance. The maintenance was as important as the flying. When he first arrived in Southeast Asia he said he thought he was there to fight communism, “after about two weeks I realized I had to do whatever necessary to stay alive and keep as many people around me alive.”

White’s base camp was 100 miles north/northwest of Saigon, with most of the action taking place up “in the fishhook area on the border of Cambodia.” 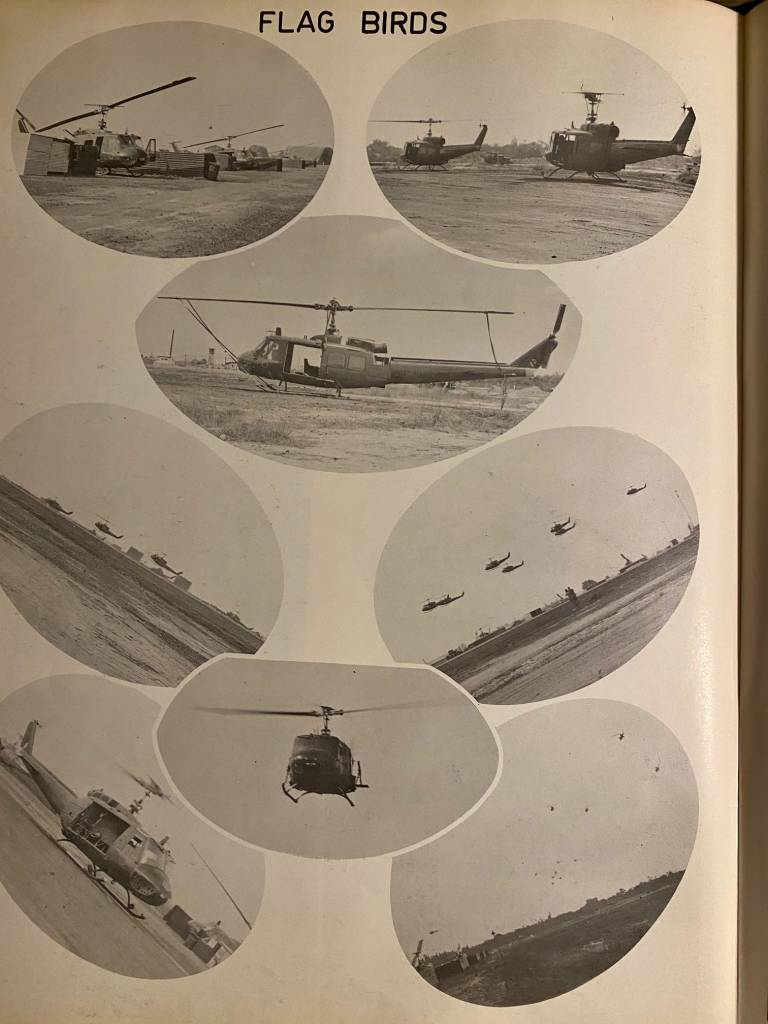 “Anything you can do with the helicopter we did it besides we did not spray any of that agent orange.”

As a crew chief White flew over 1,300 hours of combat missions in Vietnam and Cambodia and about 50 hours of stick time. “My bird set the battalion record for hours flew in one month, we broke that record the next month… I flew a lot.” 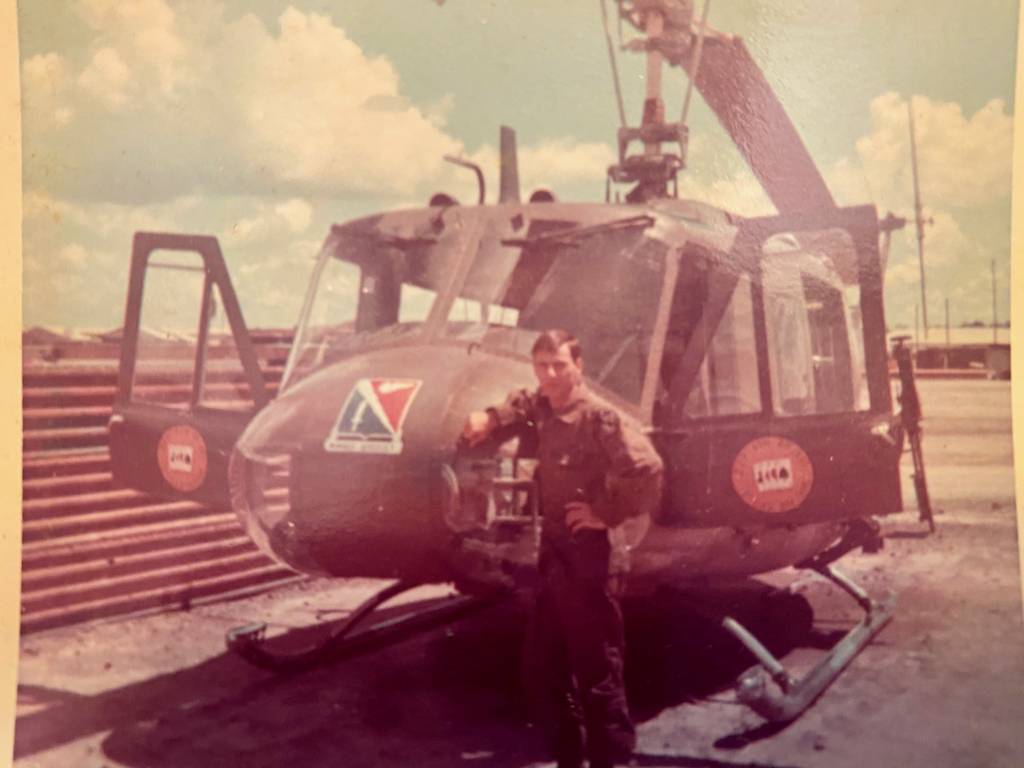 On Nov. 22, 1969, Sp. 4 White distinguished himself by exceptionally valorous action while serving as a crew chief. Knowing that a friendly unit was in heavy combat, and disregarding his own safety, he volunteered to fly the mission to extract troops. As the aircraft approached the beleaguered unit, it came under fire and sustained several hits, but Sp/4 White exposed himself to engage and destroy the hostiles. His outstanding flying ability and devotion to duty were in keeping with the highest tradition of the military service. 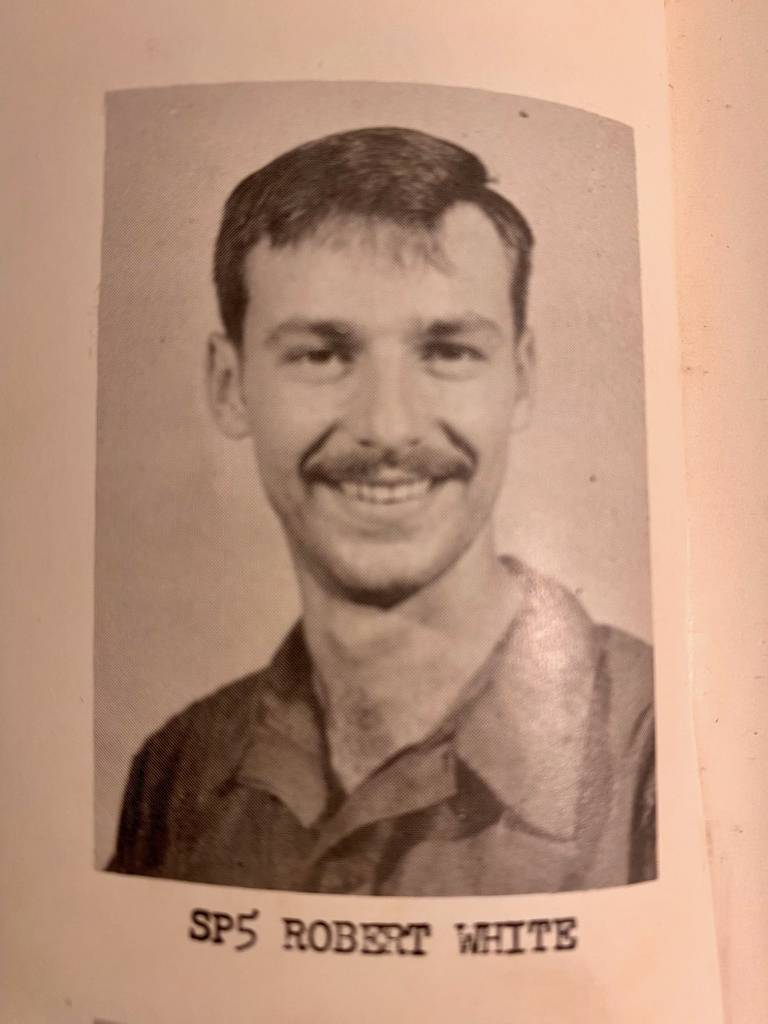 “These are bullet holes right here… we had this mission November 22, 1969– we had these alert teams, they got ambushed and a couple of them got hurt they sent two birds out there to get them… it was dark at night. We were hovering out there, I raised up to see if I could see them, the minute I sat down a guy opened up straight out in front of me 30 yards, it was like he turned a flashlight on… anyway felt like it took me forever to get on those triggers. Those are the first three rounds he shot, right under my feet,” White explains as he is going through a green photo album, with gold lettering “Memory of South Viet-Nam”. 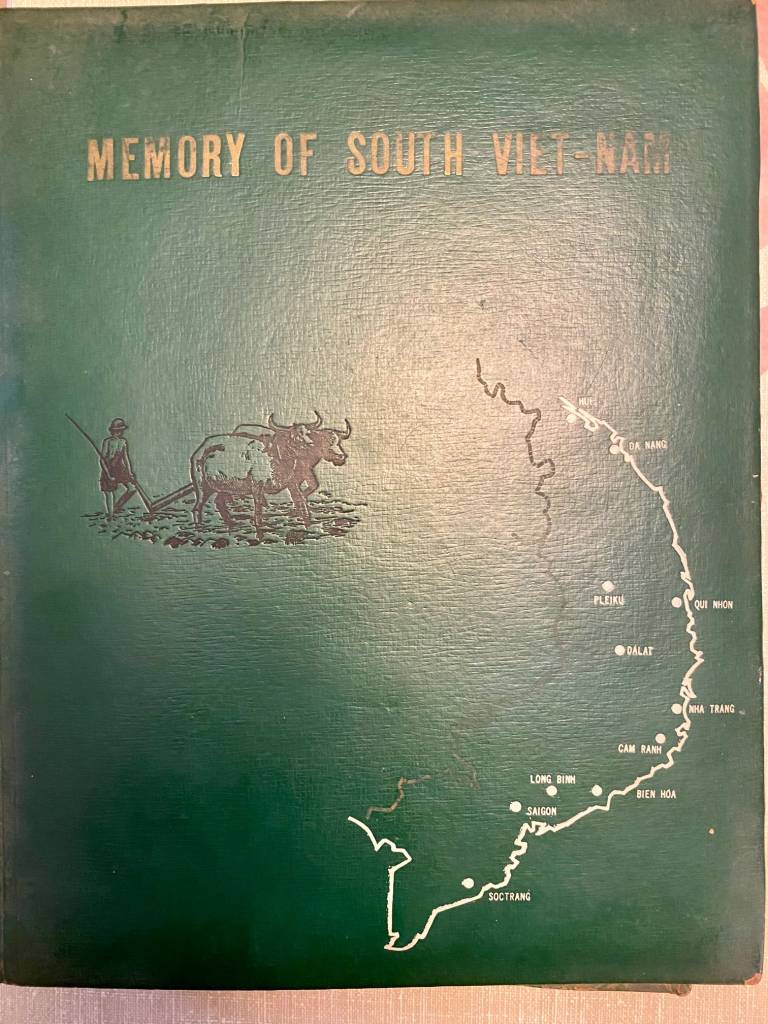 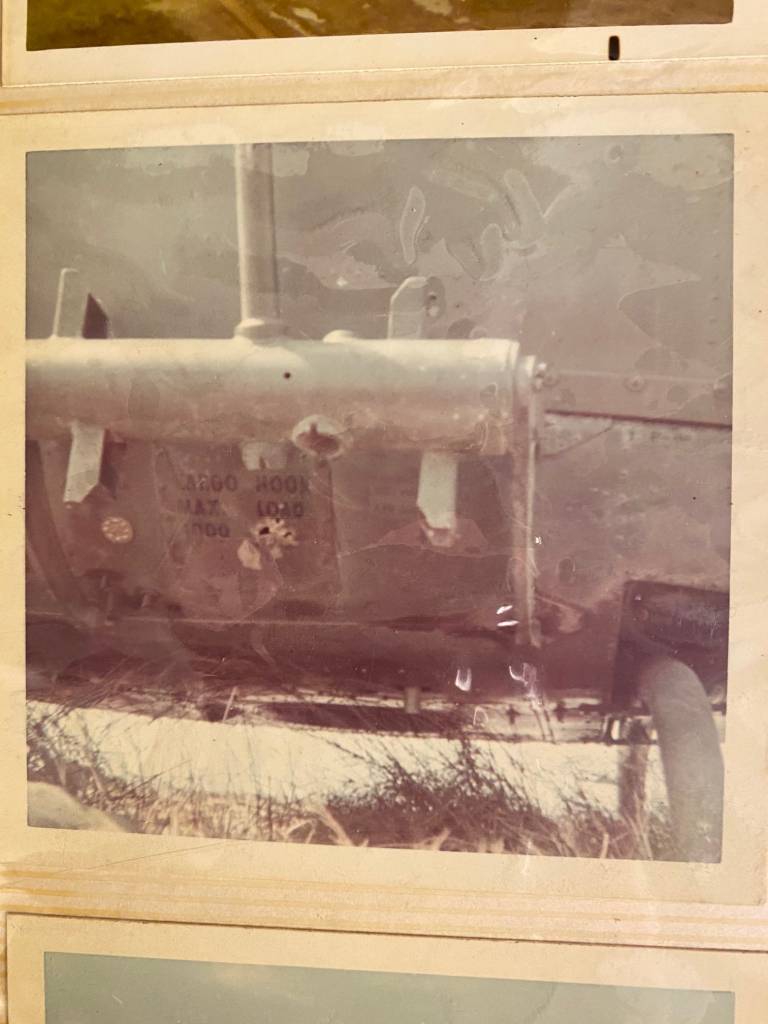 A second award of the Distinguished Flying Cross was made to Sp/4 White “for heroism while participating in aerial flight, evidenced by voluntary actions above and beyond the call of duty in the Republic of Vietnam. On April 21, 1970 White’s helicopter began to approach the landing zone, and suddenly was under heavy fire. White immediately began placing a heavy barrage of suppressive fire on the hostile positions as the aircraft hovered the landing zone. “We went in and we didn’t ever land, because of stumps, and stuff in the jungle, we hovered.” 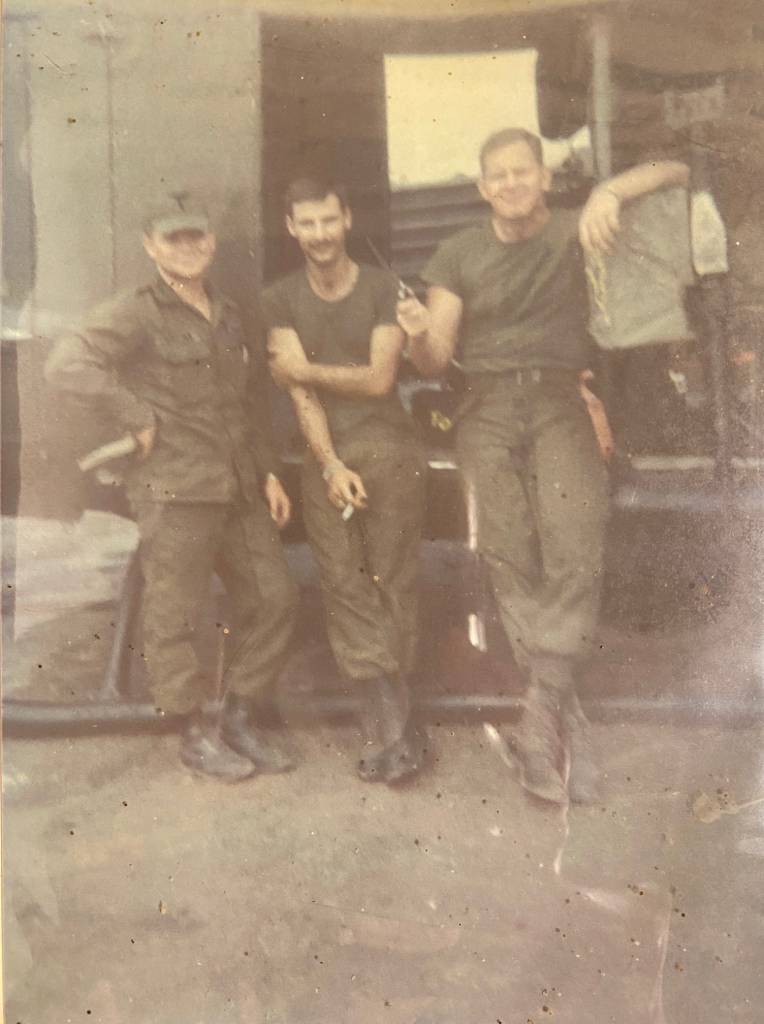 Fifty one years later, he remembers the date very vividly: “I was the last bird in a flight of six,” White said. “Three minutes out, they started shooting at us, I could hear them but I couldn’t see them.  I knew where they were, I started working that wood line back and forth, back and forth… and then when the troops got off I started giving them some fire out in front of them. That’s when they started shooting from back over here. We took 56 rounds in that aircraft, 18 were right back there where I sit.” 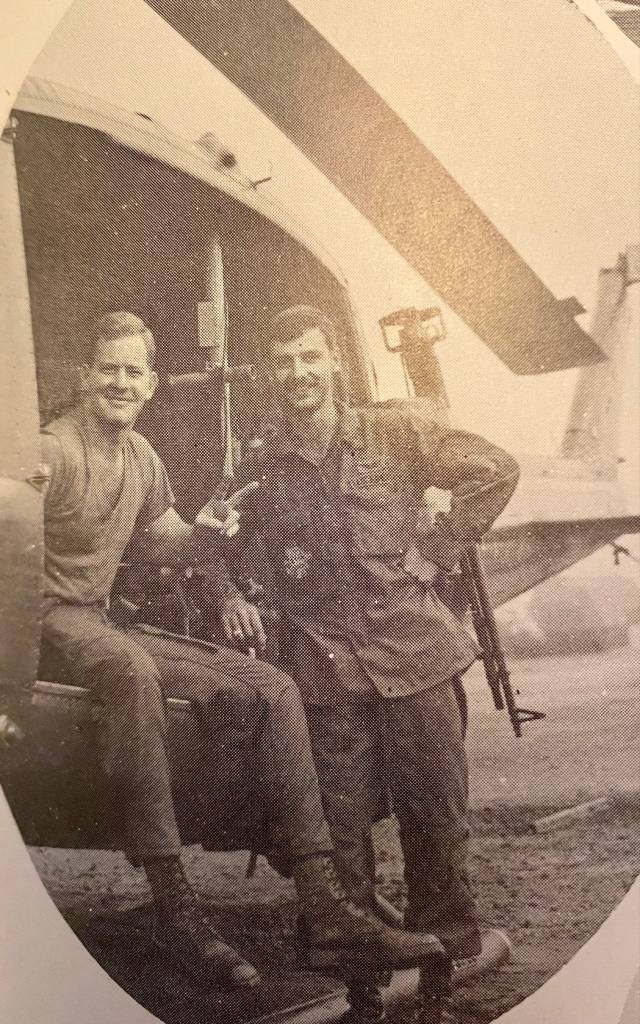 “You see these movies and a helicopter gets shot and it goes “ting”, that ain’t the way it sounds. If you have ever been in a tin building and someone outside is throwing rocks at that building that’s the way those rounds sounded when they hit the helicopter.”

“I was praying the whole time that gun would keep shooting.”

White was presented the Air Medal V for “his personal bravery and devotion to duty while serving as crew chief engineer with Company C, 229th Aviation Battalion during a logistics mission on August 25, 1969.

In June of 1970 the only offensive assault White was involved in happened in Cambodia, the 1st Cav captured weapons and ammunition from Cambodia only to be told after advancing 21 miles into the country they must stop. In total the soldiers captured seven million rounds that were never fired at the Allied and ARVN forces in the Republic of Vietnam. “We hauled cases and cases of guns, big rockets, out of there,” he said. 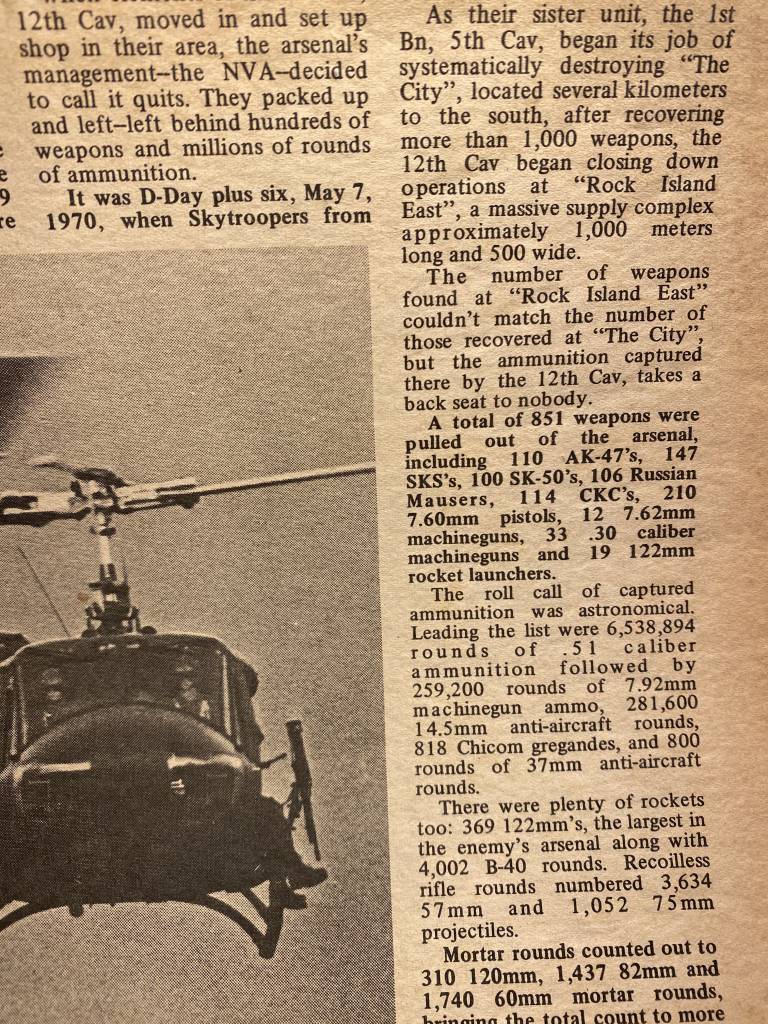 For service between July 1969 and July 1970 White was awarded the Bronze Star.

The hero from Lyerly said he feels honored to be recognized with a Quilt of Valor, even after five decades. 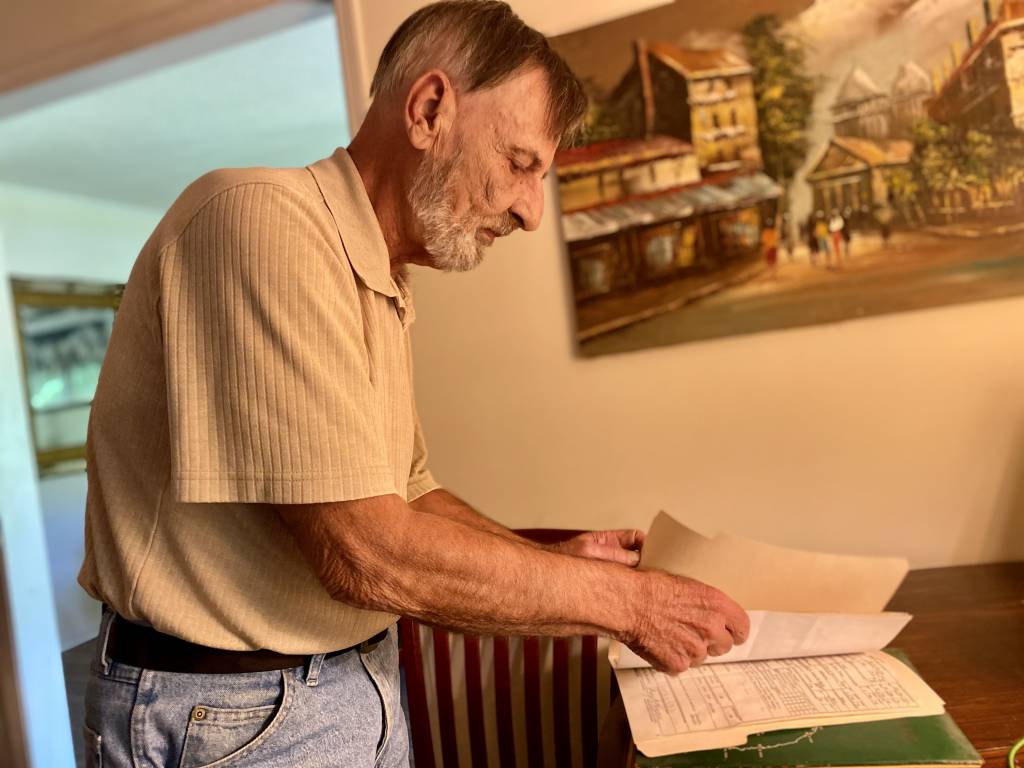 “What I did was dangerous enough, but them guys who were down there in that jungle, you’d better take your hat off to them. If I made it through the day I had a cot and a mosquito net to sleep under and them guys were sleeping out on the ground in bugs for months.”

“When I got back I kissed the concrete and I don’t remember anyone spitting on me.” 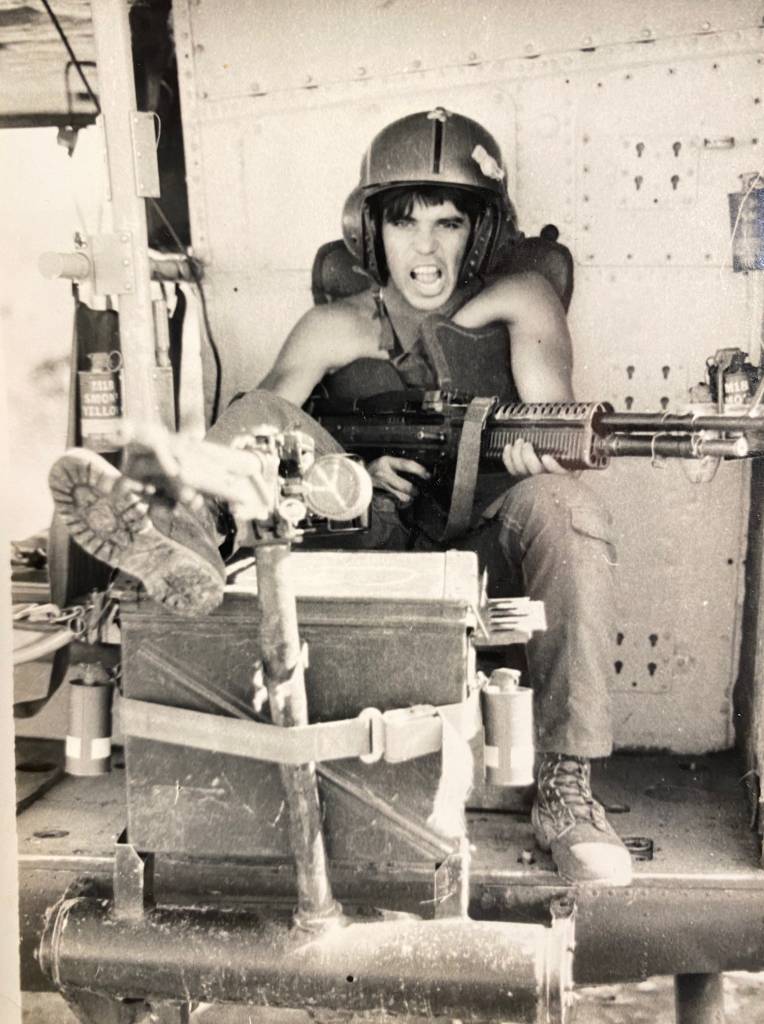