Anne Cavin Moxley of Griffin, Georgia, passed away on December 23, 2019. 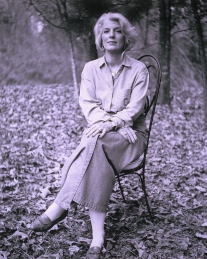 Anne Cavin Moxley of Griffin, Georgia, passed away on December 23, 2019. Anne was born in Fort Payne, Alabama, on May 2, 1949. She always said she was thankful to be born in the 1940s because she was surrounded by family members of the Greatest Generation. She heard her parents and family members reminisce about the war years as they listened to their favorite songs from that decade.

Her roots were deep in Alabama soil. She was the daughter of the late William Alvin Cavin and Kathleen Smith Cavin. Her maternal grandparents were Houston Henry Smith and Tressie Truss Smith. Her grandmother was a descendant of the founder of Trussville, Alabama.

The ancestral home of her paternal grandparents, Fletcher William Cavin and Annie Leslie Cavin of Cherokee County, Alabama, was briefly the home of Sequoyah, the famous Indian chief who invented the Cherokee alphabet. The Cavin farm marks the beginning of the Trail of Tears in Alabama.

Anne’s family moved to Summerville, Georgia, in the 1950s. She began first grade at barely five years old and was the youngest in her grade throughout her school days.

At Chattooga High School, Anne excelled in creative writing and was encouraged to submit her essay on “My Responsibility to America” to a state contest. She won the state contest and represented Georgia at a national conference in Washington, D.C. which selected fifty girls and fifty boys nationwide. As a senior, Anne was the assistant editor of the school newspaper, The Indian Lane, co-captain of the Varsity cheerleaders, voted “Miss Citizenship” and chosen “Most Likely to Succeed” as a senior superlative. She published poetry in “Between These Lines,” which was submitted by students from across the state.

Graduating at the age of seventeen, she began her college career that summer attending Young Harris College. While there, she was a member of Phi Delta and Chez Nous. At Young Harris, she met her first husband, John Clinton Walters, III of Hampton, Georgia. They were married for twelve years and had two daughters, Allison and Elizabeth (Betsey). After they divorced, she returned to college and immersed herself in her studies. She graduated from Tift College in Forsyth with a B.S. in Elementary Education. She continued her education and received her master’s degree in Early Childhood Education from Mercer University.

In 1990, she was introduced to Henry Moxley through mutual friends. They were engaged six months later and married in the Cayman Islands. She gained two additional daughters, Bryan and Brooke Moxley, whom she adored.

Anne taught school in Griffin for twenty-eight years with some of the finest educators in Spalding County. She was a beloved teacher and many of her students remained in contact after they reached adulthood.

Anne had an incandescent smile and comedic wit with lightning timing. She always had a hilarious remark that left her friends laughing. She was known for her classic southern pimento cheese and always had an elegant style, charm, and wit.
In retirement, her love of writing could be found in her thank you notes and correspondence which were precious and saved by friends and family to read and re-read. Her handwriting was a beautiful, flawless script and every envelope was easily identified as hers.

She loved to write and create, making handmade cards, quote books, bookmarks, and scrapbooks for family and friends.

Anne was an avid reader all her life. She was a member of two book clubs and she had stacks of books all over her house. She was always happy with reading two or three books at the same time.

Her gifted writing and personality made a difficult journey warm, funny, and inspirational. It was the perfect reflection of her spirit and her strength that made here a true and loyal friend. She was fiercely devoted to her children and grandchildren.

A Memorial Service will be held on Saturday, January 4th, 2020 at 3:00 p.m. at the First Baptist Church in Griffin.

Immediately following the service, the family will receive friends at Morgan Hall.

In lieu of flowers, please consider a memorial gift to Stepping Stones Educational Therapy or to the Eugene P. Odum School of Ecology at the University of Georgia.

Donations to the Odum School of Ecology can be made online at https://www.ecology.uga.edu/give/ or by check payable to the UGA Foundation. Please include the Ecology Fund / EcoReach in the memo line.