Part 2: Chattooga Commissioner Elsberry Asks for the Prompt Return of $47,835.00 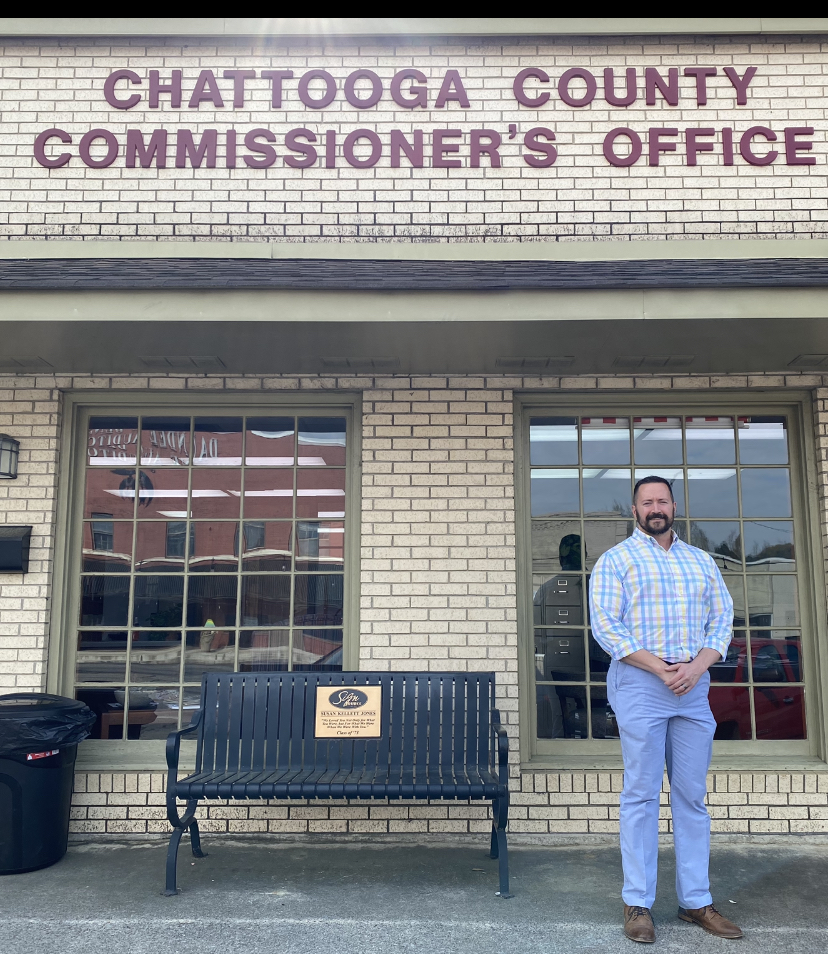 Chattooga County Sole Commissioner Blake Elsberry answered a few questions regarding his request for the return of $47,835.00 from local businessman Milford Morgan and B.J. Construction.

When asked if anyone helped him prepare the letter to Mr. Morgan or if he acted alone, Commissioner Elsberry said, “that was under advisement from legal, from County legal.”

When asked if it was position that TryCon still owes the $47,000, Commissioner Elsberry said he was just trying to resolve the audit issue.

Elsberry did clarify that it was Chrysan Thomas, CPA who brought the matter to his attention while she was preparing the state audit.

The county also has a forensic audit being conducted by Stephen Smith.

When asked if he had located where the work was done, Elsberry said, “we are still working on that whole situation.”

AllOnGeorgia reached out to Senator Jeff Mullis, Spencer Hogg of the NWGA JDA and Lyerly Mayor Jim Ferguson regarding the Lyerly Sewer Project.

Mayor Ferguson responded to the media inquiry saying: “I did attend a meeting at which we discussed extending the sewer line to support the planned expansion of Try-con.  At that meeting the Town of Lyerly agreed to attach the planned expansion to our sewer system. The Town of Lyerly’s involvement in the project was limited to hooking up the completed extension of the sewer line to our system once it was completed. I do not recall Try-Con requesting that we perform the sewer extension.  The Town of Lyerly was not involved in any detailed project planning or financial negotiations.”

Spencer Hogg of the NWGA JDA responded to the media inquiry saying:

“The Northwest Georgia Joint Development Authority’s role in the Try-Con expansion project was the same role we take in every project: to partner with industry, local officials and State officials to expand jobs, investment and prosperity in Northwest Georgia. For reference I am including an overview of our involvement in the project, including aspects that would positively impact the overall economic viability and attractiveness of Lyerly, Georgia.

* We have spoken to Genesee &Wyoming’s leadership out of their regional office in Jacksonville, Florida about the rail-spur project in Lyerly.

* Sen. Mullis requested the funding for the rail spur for Lyerly and maintenance of the rail line in the State of Georgia’s budget as a bond project (and it has passed).

* The rail spur project is to benefit the public, Smith Iron Works, and Try-Con.

* We met with the Company and the previous Commissioner while the totality of the project was discussed.

* We met with the GDOT Commissioner about the potential Highway 114 widening project in front of Smith Iron Works, Try-Con and Mohawk’s Lyerly location.

* The GDOT Intermodal Dept. should be aware of the rail project due to approved budgeting and GDOT sells the bonds.

*The sewage expansion was handled by the local government, although the Northwest Georgia Joint Development Authority was aware of that being an aspect of the larger expansion plans and general economic benefit to the Town/County at large.

* We attended meetings and had discussions concerning the Try-Con project with partners such as Georgia Power, Chattooga County and the Georgia Department of Economic Development.

* We are confident that the project will be completed once the industry returns to pre-Covid levels of production.”

Chattooga County Sole Commissioner Blake Elsberry said “at the end of the (state) audit there is a comment for a possible violation for the Gratuities Clause from the state of Georgia. It is based on an invoice that was found for 47,000 dollars and some change for a sewer project.”

“There is a possibility some of the work may have been done on private property,” according to Elsberry. The work was completed at Try-Con in Lyerly and the funds came out of the county SPLOST account.

What is SPLOST used for?

A special-purpose local-option sales tax (SPLOST) is an optional 1% sales tax levied by any county for the purpose of funding the building of parks, schools, roads, and other public facilities. Elsberry did say SPLOST money could be used for sewers on public property. 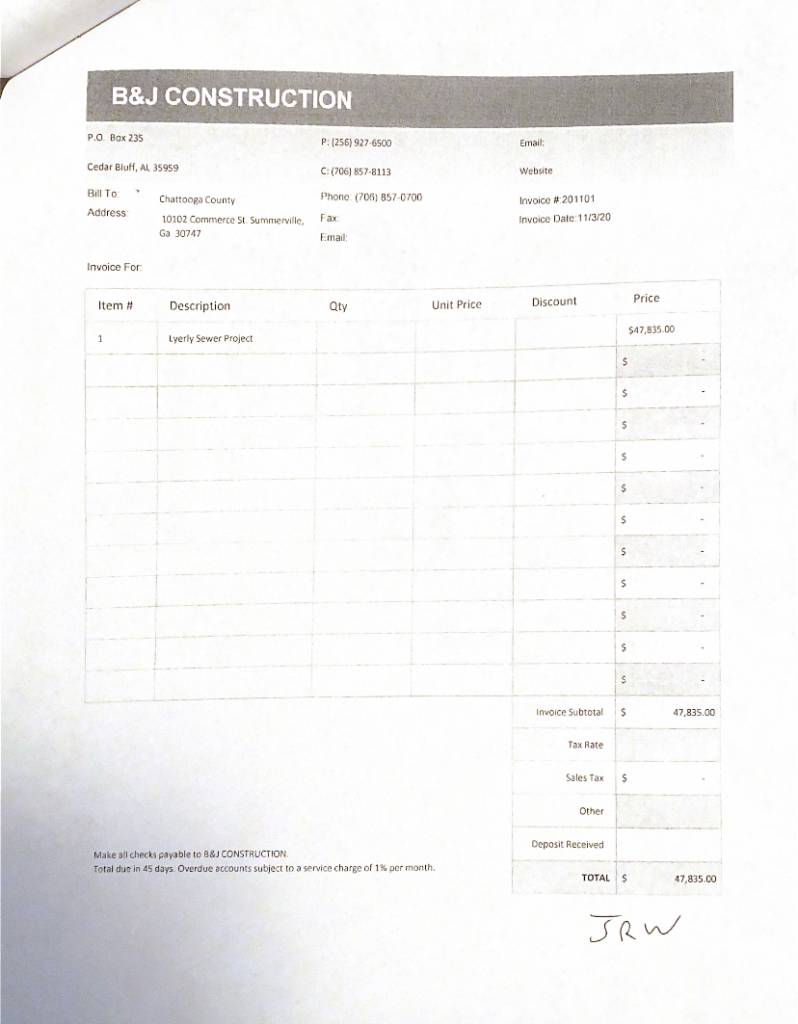 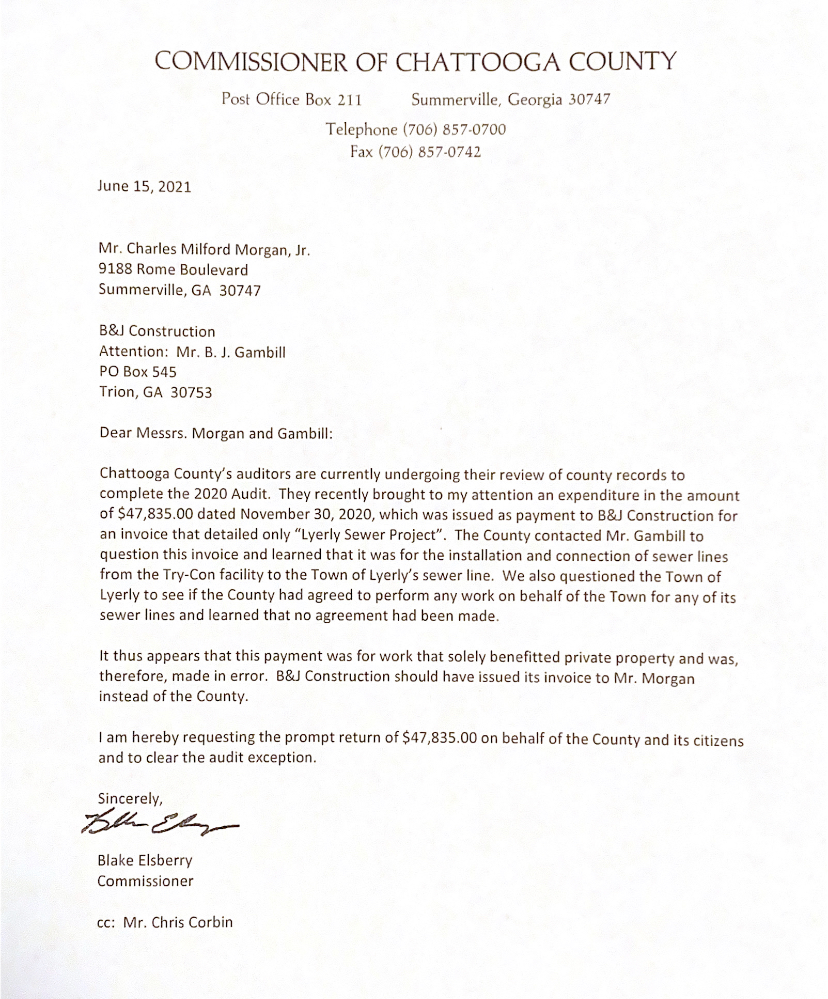 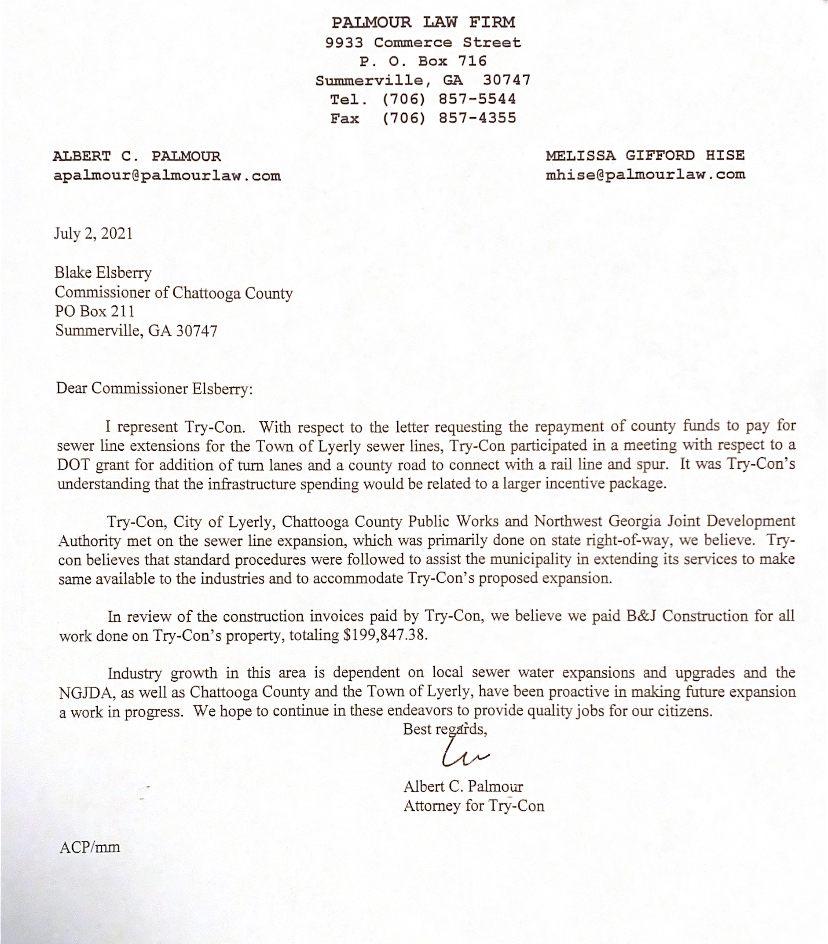 In more recent years, the courts, including the Georgia Supreme Court, have ruled that the clause extends to local governments, and that the Gratuities Clause, through court opinions, had even been extended down to hospital authorities, development authorities, school boards, and local pension boards. This is a well-known prohibition and is outlined on the Georgia Association of County Commissioners of Georgia website.