Dristin Ogles, 22, who had been residing at 290 Melba Drive in Trion was jailed for leaving his dog in a cage for two weeks, according to Summerville Police reports. 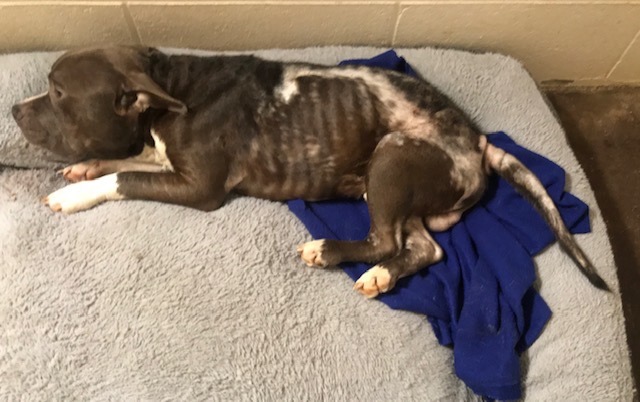 Dristin Ogles, 22, who had been residing at 290 Melba Drive in Trion was jailed for leaving his dog in a cage for two weeks, according to Summerville Police reports.

The Summerville News reported that Chattooga County Animal Control Officer Daniel Hayes received a tip that a pit bulldog mix was locked inside a cage near 25 Mountain Side Drive.

Chattooga County animal control found the dog and it could barely stand, according to an incident report.

From the incident report: “On the 18th day of July 2019 at 1430 hours I was dispatched to meet with Animal Control at 25 Mountain Side Dr in reference to a severe case of Animal Neglect. Upon arrival I met with Daniel Hayes who stated to me that his office had received a tip that a dog at that location had been left locked in a cage and they had not seen the owner in 2 weeks. The report Id #12252 from animal control also stated the dog could barely stand. When I observed the dog I was familiar with the animal and the owner, I made a recent traffic stop on Dristan ogles and the dog was inside his blue Ford Ranger pick-up. I also found paper work in the abandon vehicle at the location to verify this.

When I made contact with the animal it had clearly not been out of the cage in an estimated 14 days due to the smell and the animals inability to stand. The animal’s hair had began to fall out, I could see the whole rib cage pronounced through the skin. The temperature outside this day was 86 degrees but felt like 90 according to the National Oceanic and Atmospheric Administration (NOAA). I am familiar with the temperature peaking with a heat index of over 100 Degrees during the time span the animal had been abandon in the cage. Daniel Hayes had already began to try and get the dog to drink water , He stated it was one of the worst cases of neglect that he had encountered as his time with Animal Control. We then removed the dog from the cage and loaded it onto the truck and transported the dog to Summerville Veterinary Office. They immediately began to wash the animal and try and make it comfortable.

I was able to make contact with Dristin Ogles who had been residing at 290 Melba Dr in Trion for the past 2 months with his father. I ask Dristen why he had left the animal in the cage abandoned , He stated that his mother had recently passed and that he had been evicted from the residence . He went on to State ,that he needed to just get his sh#$ together, Mr. Ogles appeared to be very regretful for his abandonment of the animal, Mr. Ogle was transported to jail without further incident,” Reporting Officer Matt Pritchard stated.

The dog’s name is Bo, he is a male gray pitbull described to be on the shorter side, he even maybe a dwarf pitbull.

The dog’s condition was considered a MEDICAL EMERGENCY according to animal advocate, Carlean Cundiff. She made the following post on facebook concerning Bo. “This poor dog was brought in by Animal Control -the dog had been neglected- no food or water for at least 2 weeks- Remember it has been extremely hot. His name is Bo and he is at the vet’s office receiving medical care – We would like for a rescue to step up and help this poor dog when he can be released- he is a male gray – pitbull on the shorter side – may be a dwarf pitbull -not sure — he is not able to stand at this time and is only eating soft food-he is anemic- but we think he will make.  We do not know if he is good with other dogs – due to his condition we could not  test him.  Not sure of the age- when I looked at his teeth – all I could is white gums.  He was covered in fleas – was given a bath immediately and has had flea control.  We do not know heartworm status- he needs to stabilize before they start drawing blood – he needs everything he’s got to live.”

The post has been shared over 1,000 times resulting in a rescue home for Bo.

Ogles was arrested for cruelty to animals, according to jail reports. City Ordinance 10-7(B) clearly states ,”No person shall abandon any animal on any property, public or private or to keep an animal in unsanitary conditions”