For Chattooga County residents this change resulted in Mr. Hoyt being transferred to the garden department. 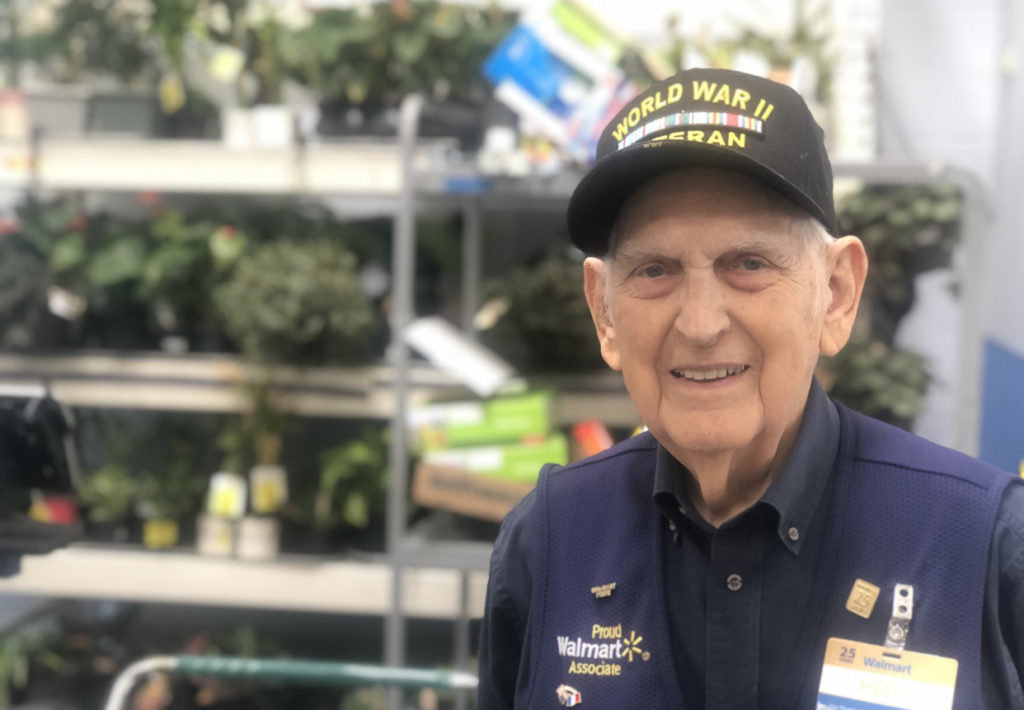 Months ago many Walmarts did away with its traditional greeters, including Trion’s Walmart.

The nation’s largest retailer eliminated greeters – employees stationed at the front of stores to welcome those who enter – at about 1,000 stores replacing them with a new and expanded position called “customer hosts.” The job description for the new position requires hosts to be “able to lift 25 pounds, clean up spills, collect carts and stand for long periods of time, NPR reported.

For Chattooga County residents this change resulted in Mr. Hoyt Williams being transferred to the garden department. Mr. Hoyt wants all Trion Walmart customers to know he is still working 32 hours a week in the Garden Center and hopes his regulars will stop by and say hello.

Mr. Hoyt is one of the few remaining Chattooga County WWII veterans. He graduated Trion High School in 1942, and joined the Army to serve in WWII.

Despite half a century of time to soften the pain, when Mr. Hoyt talks about the Nazis, the passion and emotion are as raw as the days he experienced them. He fought through France, Belgium and finished his European mission in Germany. Mr. Hoyt spent Christmas of 1944 in the Ardennes forest at the Battle of the Bulge, the last major German offensive campaign of the war. In this battle alone the Americans suffered some 89,000 casualties and the Germans lost around 120,000. War was war even over the holidays.

Mr. Hoyt Williams will tell you the secret to living a long time is to work every day. While he doesn’t recall his exact age at the time he began his first job, he knows as soon as he was able to work he went to work as a paper route boy. After working 40 years at the supermarket Mr. Hoyt did attempt retiring, but retirement proved to be boring, “I was tired of mowing the lawn… it was time for me go back to work, Wal-Mart said they could put me to work even though I was old and they did,” Williams said. Mr. Hoyt has been working full-time for Wal-Mart since 1993.

As far as the new job in the Garden Center, Mr. Hoyt, said he doesn’t mind the work but does miss getting to see many familiar faces. “Some people have figured out I work back here now, so they stop by to say hey.”

Mr. Hoyt will turn 96 in November.

Bryant and Sons to get help with flooding
Caught in the web: A family struggles against Brown Recluses
Posting....