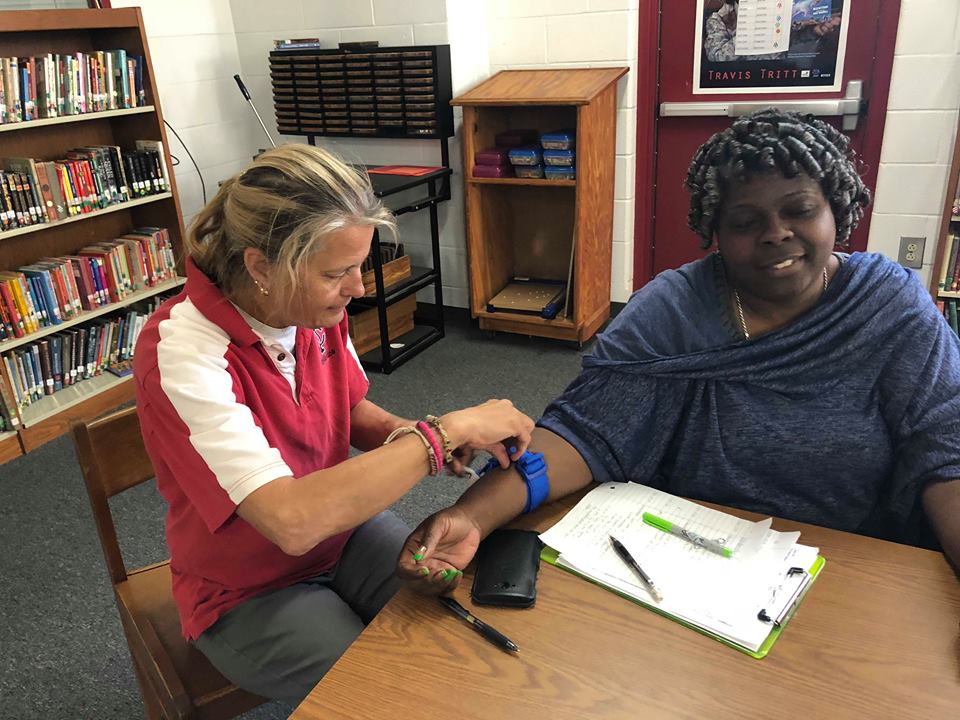 Teachers at Lyerly Elementary and Middle School completed training Tuesday, April 17 on how to stop bleeding. The training included the basics of applying direct pressure, packing a wound with gauze and tying a tourniquet. All teachers in Chattooga County Schools have already completed, or will be completing, this training within the upcoming days.

“Studies from tragedies like Columbine show that lives could have been saved by stopping the bleeding,” Sgt. Josh Powell said. In today’s reality of school shootings, teachers must know how to keep the victims from bleeding to death.

If bleeding is severe, it can kill within minutes. Potentially, bleeding can cause death before trained responders can even arrive on scene. Research has shown that bystanders, with little or no medical training, can become heroic lifesavers, given the correct training. Similar to the use of CPR or automatic defibrillators (AED), improving public awareness about how to stop severe bleeding can be the difference between life and death for an injured person.

“I felt the training was very informative, and useful for many situations we may find ourselves in,”  Lyerly Middle School teacher, Kanissa Martin said. “The instructors were great to work with. They made sure we knew how to stop bleeding due to a variety of injuries.” Active shooter situations are not the only time when teachers need to know when to stop bleeding.

Over the past five years, about 125,000 teachers, counselors and administrators across the country have been trained in stopping the bleed. The program, through grants, provide schools with bleeding-control kits containing lightweight tourniquets, gauze coated with blood-clotting drugs and compression bandages.

The teacher triage/stop bleeding idea originated with Dr. Lenworth Jacobs of Hartford, Conn., who operated on victims of the Sandy Hook Elementary School shooting in 2012, in which 26 children and adults were killed.

The initiative, dubbed Stop the Bleed, has spread quickly and training is now available in all 50 states.

Georgia has been a leader in the program, spending more than $1 million to expand a test program and ship medical supplies to schools. Since last spring, the Georgia Trauma Commission, a state agency that works to improve emergency care, has coordinated the training of more than 18,000 educators.

Currently the campaign has been funded to train and equip all Georgia Public Schools with bleeding control kits. Stop the Bleed’s goal is to build resilience by educating and empowering all citizens to be aware of the simple steps that can be taken to stop or slow life threatening bleeding.