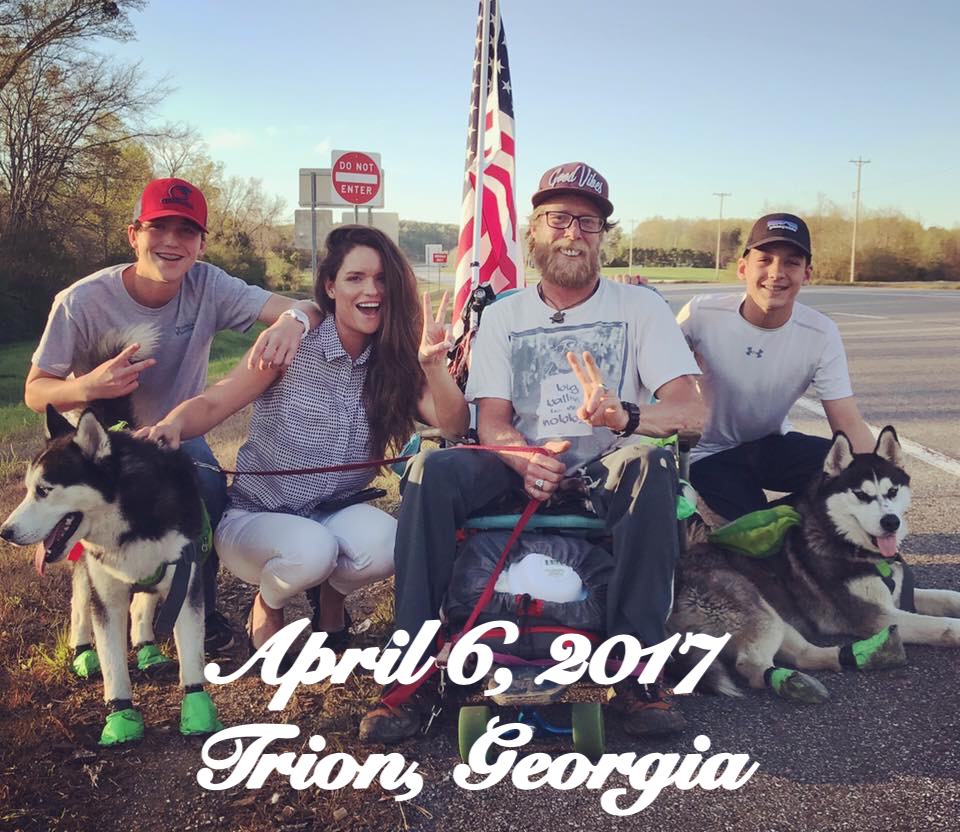 Georgie Cutright has been a homeless man on a mission. With little more than a lawn chair attached to a skateboard, Cutright set out to do something most people said couldn’t be done… cross the country being pulled by his two husky sled dogs. He passed through Northwest Georgia, pulled by his two Huskey dogs – Sarah and Lobos – a little over one year ago on his way to Venice, California.

His four-legged friends, his faith and his sled were the only possessions Georgie Cutright had when he set out from Knoxville, Tennessee in March 2017. He has completed 2,350 miles of the adventure with only 25 miles remaining and is set to have Sarah and Lobos pull into Venice Beach on Easter Sunday. “It’s the longest any man’s ever been pulled by dogs,” Cutright said.

Cutright told AllOnGeorgia he had learned a lot from his adventure but mostly, “there’s a lot of good in this world.” Over the twelve month adventure Cutright and his dogs have met many friends. “A man in East Texas who had a boat repair place, gave me a new modified fiber glass board, mine was falling apart,” Cutright said. A new board, several flags, and a few lights are the only additions to the sled. “I look like a carnival ride.”

Cutright went on to say, out of all the places he’s visited the Northwest Georgia/Northeast Alabama, Lookout Mountain and Piegon Mountain were his favorite.

When asked what he had learned from the trip, what great insight he had from his travels, he simply replied, “everything you need to know is in the Bible.”

Plans for the future:

Sarah is pregnant and Lobos is the proud Daddy. Cutright has an arrangement to stay in Springville, Alabama and raise the pups while he works on two books. His plans are to write a children’s book from the dog’s perspective of the adventure. He will then shift his focus to a comprehensive book of his journey and likes the title ‘Why do others help others?’.