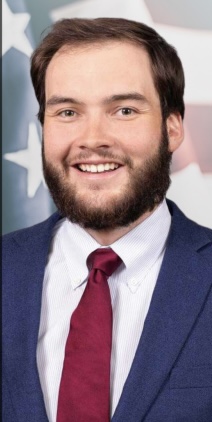 Senator-Elect Colton Moore released a VICTORY STATEMENT: Thank you all for the out pouring of support. It’s been humbling. We made this change for Liberty, together! I welcome those to join us, even those that may have not voted for me. Please enjoy this statement and preview of what’s to come for Northwest Georgia.

Full statement below:
—-
State Senator-Elect Colton Moore has declared victory over Steven M. Henry in Georgia’s 53rd State Senate District. Moore delivered a major blow to the RINO Establishment in Georgia. The seat is currently filled by Jeff Mullis, who selected and backed Henry, and whose term will be expiring in January, 2023.

Senator-Elect Colton Moore commented, “Strong Republicans had a great night in Northwest Georgia. I am humbled to represent Liberty in Georgia’s 53rd Senate District. A thank you to our Lord and Savior, every single voter, our teachers, our Law Enforcement, and all those who worked on this campaign. Congratulations to Congresswoman Marjorie Taylor Greene, Representative-Elect Mitchell Horner, Representative Steve Tarvin, and Representative Mike Cameron for winning their races. I am looking forward to representing Northwest Georgia with each of you as we restore freedom to our corner of the state.”
With 100% of the precincts reported, Colton Moore prevailed over Steven Henry by a margin of nearly 3%. Moore totaled 14,631 votes to Henry’s 13,807 votes. There were a total of 28,435 votes and Moore declared victory with 51.45%.

Colton Moore’s Campaign Manager and Internet Expert Michael Gargiulo said, “What an incredible day of victory for Liberty in America and Georgia. Colton is one of the greatest leaders I know and we are so happy to have led him to victory. An additional thanks to all American Veterans, our team, volunteers, fellow Citizens, and all Voters. The Civic Process and Free Speech in America would not be the same without Liberty-focused campaigns that stand for what we stand for.”

Gargiulo also serves as the CEO at VPN.com, an Anti-Censorship and Free Speech For-Profit Organization, and previously worked with Colton Moore as a premium domain broker to acquire BrianKemp.com for Governor Brian Kemp in 2018. The two met in high school through the Career Technical Student Organization called Georgia Future Business Leaders of America. Both later graduated together from the University of Georgia in 2015. Gargiulo confirmed he will continue assisting Moore in office as they build the team to support the and Citizens of Northwest Georgia and run future campaigns.

Gargiulo concluded his statement with “a special thank you to Congresswoman Marjorie Taylor Greene, some of her prior staff who worked on this campaign, and all staff who led us to victory including Joshua Abernathy, Garrett Jacobs, Gabriella Rowell, and so many others. We look forward to winning with Colton in many campaigns to come and representing the people of Northwest Georgia. More strong business leaders and Citizens need to get constructively involved making a positive difference in government.”

When asked about his first items of business, Senator-Elect Moore had this to say: “In addition to supporting other strong Republicans like Lieutenant Governor candidate Burt Jones, Citizens can expect I will expand our Teacher Rights, expand our Sherriff’s Retirement Programs, and purge all voters who are no longer with us from our voter rolls.”

Moore said, “In addition, I am seeking a total repeal of the Northwest Georgia Joint Development Authority (known as a Quasi-Governmental Organization or QGO) which has been inappropriately influenced by existing Senator Jeff Mullis, and is an unnecessary government authority on our Citizens.”
Moore goes on to state, “I believe the JDA is government overreach and I request that each county in Northwest Georgia review and withdraw from the JDA effectively immediately. At this time, the JDA has limited the free markets of Northwest Georgia, expanded corruption, and given Jeff Mullis a way to control the flow of money in the district. This will be no more.”

Over 200,000 Citizens are represented by the Senator from Georgia’s 53rd District.
Moore concluded his Victory Day statement with, “I am an Auctioneer and Cattleman by trade but the people have chosen me to continue representing our conservative Republican values. Secure Elections and honest Law Enforcement officers are what our society is built on. I will Represent Northwest Georgia with every fiber in my being as the #1 Most Conservative Republican in the Georgia State Senate and the entire Georgia Assembly. Wishing all Georgians a happy, safe, and freedom filled Memorial Day Weekend.”