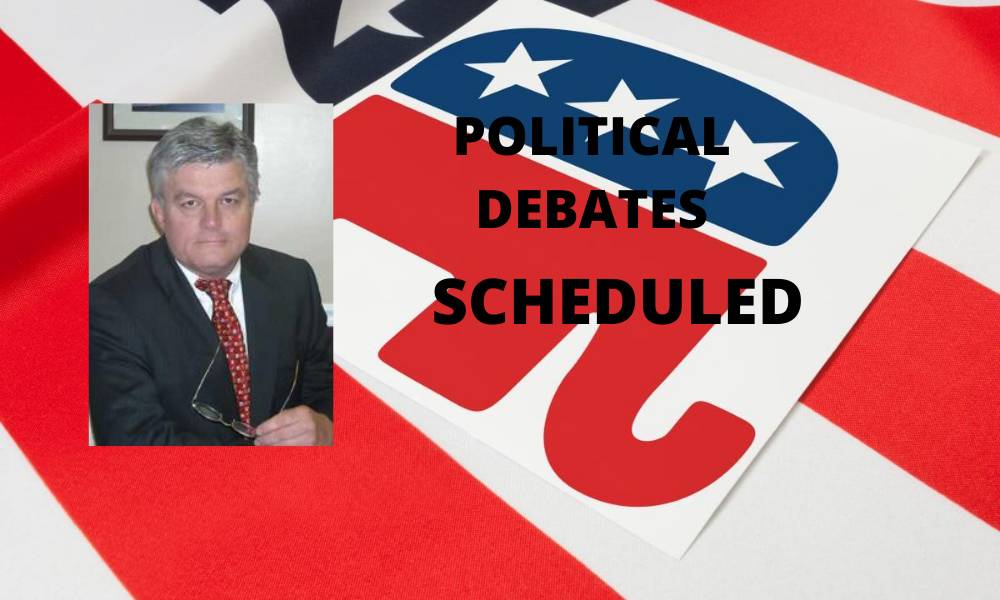 The Sky21 Chattooga County Republican Political Debates have been scheduled. The debates will air August 3rd on Charter / Spectrum cable Channel 5, and over air channel 21.1. The exact time will be announced later.

There will be a Probate Judge debate between Gary Woods and Teresa Pope, followed by a Commissioner debate between Blake Elsberry and Jason Winters. Questions for the debate will come from submissions by the public and  will not be picked by SKY21, but by the moderator who conducts the debate.

Questions can be submitted to sky21viewers@gmail.com. When submitting your political debate questions  Republican Ticket Runoff Debates. YOUR IDENTITY WILL BE ANONYMOUS.

The moderator for the debate will be Rome attorney David F. Guldenschuh.

David Guldenschuh is an attorney and native of Rome, Georgia. He is a 1981
cum laude graduate of the University of Notre Dame Law School. After serving
a federal appeals court clerkship, he began practicing law in Atlanta at the firm
of King & Spalding. Due to the serious illness of his daughter, David returned
to Rome in 1990 where he joined the firm then known as Smith Shaw &
Maddox. He started his current solo practice in 2004.
For the past six years, David has served as a Constitutional Law Policy Advisor
to the Heartland Institute, a national public policy think tank based in Chicago.
He is generally recognized as a leading authority on the “Article V Movement,”
a bi-partisan effort among the states to use their constitutional authority to
propose common sense amendments to the US Constitution. He serves as
special counsel to multiple Article V advocacy groups. He is Executive Director
of the Center for State-Led National Debt Solutions. He has published
numerous articles and handbooks on Article V of the US Constitution.
In 2016, David was one of three delegates elected to represent the 14th District
of Georgia at the Republican National Convention. He is former County
Chairman and a long time member of the Floyd County GOP Executive
Committee. In September 2017, David was appointed by the Speaker of the
Georgia House, David Ralston, and the Senate President Pro Tem to serve as
one of three Georgia commissioners to the historic Arizona Planning
Convention of States, where he was elected Secretary of the Convention.
Locally, David is past President of the Rome Bar Association. Among other
activities, he is the Governor’s appointee to the Northwest Georgia Regional
Commission and he is a proud member of the Board of One Community
United.